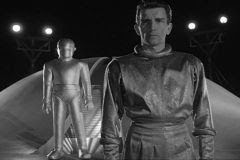 Constantine spills the beans. I mean, apparently Neo just can't keep his trap shut.
Ted has shared with us part of the raison d'etre for the remake of The Day The Earth Stood Still:

The first one was borne out of the cold war and nuclear détente. Klaatu came and was saying cease and desist with your violence. If you can't do it yourselves we're going to do it. That was the film of that day... The version I was just working on, instead of being man against man, it's more about man against nature. My Klaatu says that if the Earth dies, you die. If you die, the earth survives. I'm a friend to the earth.

Keanu Reeves, sadly, is not the star of the movie.

Al Gore is. I guess this propaganda-piece is what he needs to keep his Inconvenience afloat.While he is not credited, Gore has clearly affected Public Thought such that it comes out in unexpected and inappropriate ways. It is troubling that Gore's best work, what he will be forever remembered for, is his different appearances on FUTURAMA.

My Klaatu says that if the Earth dies, you die. If you die, the earth survives. I'm a friend to the earth.

It reminds me of a short story I read once. A young lady was trying to get this old man to gather up his belongings so they could make it to the last transport leaving for "New Earth". The woman frets and naggs the old man, but finally as the old man walks out of his apartment carrying a plant, shovel, and water - they watch the last ship take off for "New Earth".

She looks at the old man, starts to cry and says, "we just missed the last transport to the New Earth."

The old man looks at her, as he finishes watering the plant, and says, "No... This is the New Earth."

I thought it was such a powerful story and statement about humanity.

This movie won't be a powerful statement about humanity. It will just be more Gaia worship. Somehow, I think I will skip it for a good book.