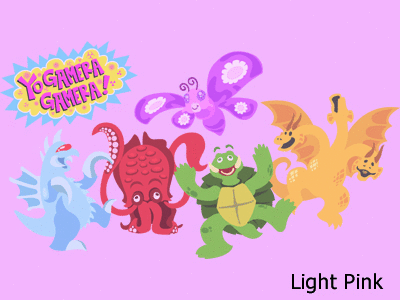 I am headed to 'Bamaburg on Thursday. G-Fest is held right outside of Chicago in Rosemont. Hello, Crowne Plaza! A Godzilla convention is great fun, and J.D.Lees and crew ALWAYS do it up right. We print their convention shirts, and take our own super-cool and groovy kaiju (giant monster) designs, which the con-goers buy with gusto! Here is our latest design, a take-off of the "Yo Gabba Gabba" show on Nick, with a kaiju flavor. The Mothra makes me so happy! Marty Whitmore did the art for us, which we printed four-color process on pastel shirts. We will have 12-14 kaiju-related designs this year, besides the other pop-culture stuff we do. Check the Aardvark Tees link to your right and check out our goodies!
Posted by The Aardvark at 6/28/2009 01:19:00 AM No comments:

Phony headlines that would not surprise us

Hey, who's the King NOW?

Sure is taking the minds of the dumb masses off of Cap and Trade, and the Bernanke Follies, idd'n it?

We have some pretty neat kids, the Dread Dormomoo and I. The boys and we went out to Jose' Pepper's (a new Steakhouse/Mexican restaurant in Ardmore) after church for nom noms, I had the 12 oz NY strip, rare, and everyone else had fajita-type goodies, 'cept for Loen, who had Pollo Vallarta, a chicken, cheese, rice, and pineapple plate of yum. Very good, after which we adjourned home, where I was gifted. Mr. McLeod gave me his at the restaurant parking lot: a brown paper bag twisted closed. It was two hundred rounds of .22 gun candy, for the plinking. Thank you. Loen and Riatsila, who know my fondness for kitsch, got me a Slap Chop, so I can now slap my troubles away, and not have a boring life.
Gothgeek had seen me earlier in the week, and gave me Invasion Iowa, the Shatner "reality" show where he fools the town whose claim to fame is being the birthplace of a Starfleet Captain, except that now he isn't because of the movie so why does J.J.Abrams hate Iowa boy I hate time travel stories. Thankee kindly!
Then Loen gave me a dodgeball to the ballocks. Lookit, tearing my throat out to establish his dominance would have been more elegant than that.

It has been a frightfully busy few weeks! I am ending a four-week stint on the road, where I have done Animazement, Mobicon, Wrath of Con, and now Anime Alabama.

Animazement, in Raleigh,NC. What can I say? It is my favorite con...period. April is the dealer room Queen of Queens, and has my huckster's heart! Sabrina, Jenny, and the rest of Crew AZ: you ALL rock. The AZ Powers that Be always put on a boffo show, with Japanese guests and artists. We print the con shirts, and Koichi Tsunoda always does great art for the shirts and program books. It's a joy to print them. Domo arigato, Tsunoda-san! The attendees are...enthusiastic about our shirts, and despite Washington's best efforts, this year was record-breaking sales wise. AZ love from the Aardvark.

And there was Tir Na Nog, a most excellent Irish pub. Riatsila, Loen, Zoomerdog and I went with Frank and Lisa of Frank's Cool Stuff (Anime DVDs, new and used). The hangar steak and the fish & chips are so very good, and they have a great selection of import beers, and local brews on tap. And then there's Amanda, our server on Saturday night. She was amazing, efficient, winsome, pretty, full of personality, pretty...we all kicked in for a primo tip for her. We had a sparkling evening. Sunday night, we had another server who was entirely adequate, but Amanda was there with her mother, saw us, ran over and side-hugged Riatsila and me. Sweet. We decided that she MUST be there for us next Animazement!

Raleigh has rickshaws. Tricycle rickshaws, run solely on tips. We took those Sunday night to dinner. We tipped. Our driver even slalomed around facade columns. He earned his tip.
I really believe in tipping well for good service, especially as a Christian. I've been a waiter, given attentive service, and been rewarded with...

It is fortunate that I was already a disciple when this occurred, because it would have surely driven me away. As it was, I wanted to chase him down, return it, and tell him that he needed it more than I. I chose instead to keep my job.

Lookit. Jesus said "the laborer is worthy of his hire". If someone does an adequate job, tip them adequately. If they are extravagant in caring for you, then tip them commensurately. As to evangelizing a server, get a tract that doesn't read like it's from the 1940's, and remember, the idea is to earn their reading time, as well as thanking them for a job well done, so slip a nice tip inside. The horror stories of the "great witness" that churchy types present at restaurants are epic. Most waitresses quail at the prospect of the Sunday-after-church crowd, who are generally the rudest, most demanding, least-tipping demographic out there. As I said, great witness. Behavior like that really earns the gospel a hearing, especially because others really want to be just like you! Jesus also said "I came that you might have life, and have it more abundantly". That abundance does not come from stiffing the help. Be a blessing to the people who serve you. You may claim to be a King's Kid, but if you act like a b*st*rd, then your legitimacy may be called into question.

Mobicon was a fun relaxacon this year, AND was rewarding sales-wise. The guys always put on a faboo show, tho' it is a decidedly adult con. I have some good friends down there, and they seem to tolerate me right well.

I posted from Wrath of Con whilst there. That is all that need be said. The high point of the con was going out to eat on Saturday night with Herb, Chris, Joe, and Tim Riley, dealers all. Such Harrowing Tales of Commerce there were. Bootleggers Undone, like that.

I am currently at Anime Alabama, and having a good time, as well as making sales. They have close to double the attendees of "Wrath", and they love our shirts. Marc Yu, the con organiser, has a felicitous knack for getting luxury venues, and wrangling two-star prices for his attendees. We are at the VERY plush Renaissance Riverview Plaza Hotel.

Marc does Anime South as well, at the Hilton Sandestin Resort. VERY nice. If Marc did a con in the middle of the Mohave in August, I would be inclined to go. He ALWAYS does a great job, by my observation. Thanks, Marc!

Toward An Evangelical Theology Of Cussing

This is amusing, and while humorous, seems to fit Pauline concerns better than the standard take on Colossians 3:8: ( But now, put off all such things as anger, rage, malice, slander, abusive language from your mouth.)
Posted by The Aardvark at 6/02/2009 07:41:00 PM 1 comment: