Part of the Madding Crowd making its way to the Dealers Room: 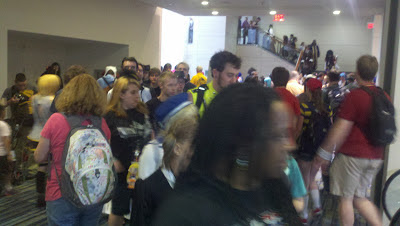 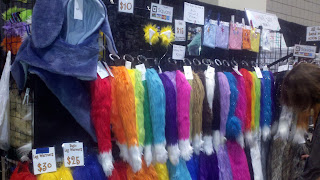 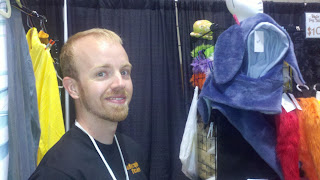 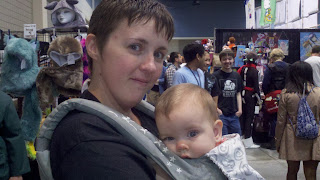 The furry offerings of Adorable Foxie, my con buddy.
She, her hubby and sweet baby are such a treat to see, and they are lovely people.
Lovely people who almost sold their entire stock!!!! 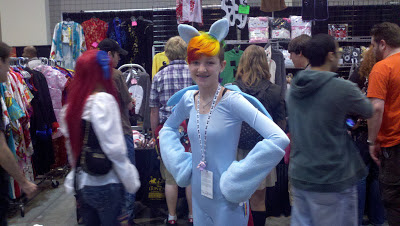 Here is a picture of a young cosplayer who was portraying
Rainbow Dash, the more athletic of the MLP-FIM crew.
I love that she has hooves. I bet that Jay does, too!! 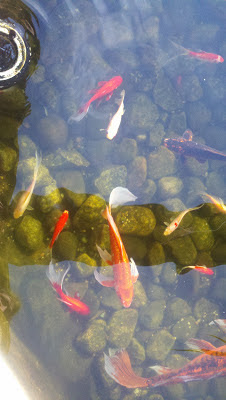 Beautiful koi in a pond outside our figurative Victory Cigar. We dined at a teppanyaki restaurant (Benihana-style), Kanki on Sunday night, and it was wonderful. Ribeye done hibachi-style. DEElish. All that, and an onion volcano, too! Japanese Happy Meal.

On the way home, Riatsila and I made the pilgrimage to JR Outlet in Burlington, NC. They have a walk-in humidor...that is the entire cigar shop!  I picked up some good deals, my usual cologne/aftershave purchase (Royall Lyme this year!), and fluffy washcloths and towels to make the Dread Dormomoo happy.

I make an annual twenty-hour round trip to buy towels for my wife. Must be love! (They are good towels!)

We listened to One Second After by William Forstchen. It is the tale of life in Black Mountain, NC and environs after an EMP attack on the US. That we drove through there added piquancy to the tale. I heartily recommend it.
Posted by The Aardvark at 5/29/2013 11:41:00 PM 1 comment: 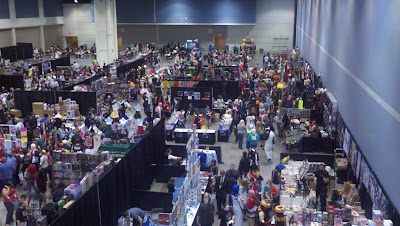 I was met numerous times by customers/fans of our shirtings who said that they always hope we will be there, because we are their favorite shirt huckster! Very gratifying. The staffers at AMZ are unfailingly helpful (except for one door guard chick who would not let us in a side door. I know...just following orders. That always ends well.).

Here is another part of the Dealers Room: 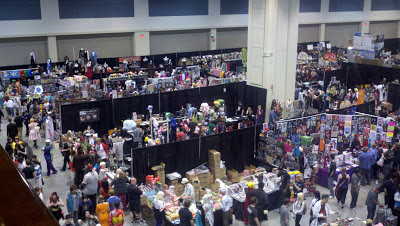 We had a great time, saw old friends, made some new, saw the genius who "advised" me about my business last year. Once again, we were the heroes of the Larger Set. Tir Na Nog was a must, as well as Ragazzi's for food. We stayed at a newly-renovated Red Roof Inn, which was clean, comfortable and quiet, and was five minutes from the Convention Center.

So, we four adjourned to Bamboo, a Japanese steakhouse and sushi bar on Airport Blvd. here in Mobile, around the corner from the con hotel. Rachael and Margaret Ish (not Kabibble) of Mercury Retrograde Press, and Herb McCaulla his own self of Starbase Atlanta, an online fan emporium and I went for noms there, and yummy noms they were! We did the hibachi thing, and talked of many things, from
Ireland, to Scotland, to the Fairy Flag of my clan, to UFOs, and the predations of dragons. The Steak and Shrimp was accompanied by fried rice, grilled veg, AND noodles. The shrimp was not fishy in taste or smell, and redeemed the breed from my meal the other night. I indulged in Sweetwater, an Atlanta brew. We sat and noshed, and talked for two hours. Our waiter was attentive, not oppressive, and an amusing lad. The owner of the restaurant was polite and welcoming, and was genuinely happy for us to have been there. This is on the weekend planner for next Mobicon. Bamboo is a must. OH! The sushi was excellent as well.

Mobicon this year was a return to the comfortable "it was worth coming...I did better than had`I`stayed home watching TV." mode of prior years. The past two years were off the charts, so a 40% drop is not a dreadful as it sounds, but the last two years did spoil me.

My Esteemed Competition here at Mobi is in the person of Kelly Pate and his shirt biz ShirtButter.com. He has a fun angle on nerdwear, and I love it.

Note to self: rewatch "Conan the Barbarian", especially the "To crush your enemies, to see them driven before you, and to hear the lamentations of their women." part.

The Aardvark is in Mobile at the venerable old SF con, Mobicon. Fandom has changed a lot. Just saw a 12-13 year old girl wearing one of those fashion corsets. Stempunk gear.

Mobi  is kind of an overclocked relaxacon, a very friendly crowd. I am a fixture here, a part of the furniture. In a good way. It is a little slow this year, but that's OK. All this, and Hungry Howie's Pizza, too.

A consumer tip: if you are not happy with a transaction, do not whine and complain endlessly. Tell the person what you want done to fix it.

Sci Fi cons can be counted on for bad cosplay, and salacious cosplay. Sometimes they collide in a horrid Reese's Cup of Doom.

Save us from tweeny Homestuckers. Loud ones.

Overheard strident conversation: "...and a man staring at a woman's chest would be like...a woman staring at his crotch!". Had I the presence of mind, I should have suggested a burqha, Many of the feminist gripes could be cured by Sharia law. At least the shallow inconsequential ones. Amusingly, the cultural vacuum left by the postmodern abandonment of Christian mores is opening the door for far less permissive incursions. Think. How many beheadings do you remember happening ten, twenty, thirty years ago? The Reagan years, those horribly moral oppressive years, had a decided paucity of domestic decapitations. I believe that the number is "zero".

Lou Zocchi is here. Gamer supplier Lou Zocchi. Gamescience Lou Zocchi. He tells cow jokes. He is a fun guy. Plus, he designed the Zocchihedron, the 100-sided die.

Going out with Authors and Publishers for dinner. Perhaps it will rub off....The ladies of Mercury Retrograde Press are delightsome. Herb McCaulla will be joining us, and on to Bamboo, the Japanese Place of Choice. It is a Japanese Happy Meal restaurant, Benihana-style with flaming onion volcanos, but the food is excellent.

This is stream-of-consciousness, and I am losing mine. That is a zuegma.

There is a chick cosplaying Yoko from Gurren Lagann in front of my table. Distracting.

A Community Mother, and I remember Momma....

The young man who died accused of setting off the Boston Marathon bombs with his brother was not finding a place for his remains to rest until the Last Day. A mental health counselor sitting in a Virginia Starbucks heard of his insensate plight, sent out an email to the "faith community", and connected with a Muslim group. Arrangements were (legally) made, and the body was buried in a community that is unhappy with it having happened at all, including the local Muslim community.

But it's OK, because Starbucks lady invoked Jesus! She said "Jesus taught to love our enemies". Apparently this means going behind the local community to bury a person who is, based upon the news, loathed because of his murderous actions. (Insert "Godwin's Law" reference here.) Because she felt good about the idea, she has forced this on the community, with her United Methodist pastor's full support.

Jesus said I am to love my enemies. He said nothing of my forcing Rigel, or Michael, or Warren to love my (or even their) enemies. That is between each of them, Jesus, and the enemies. This woman has practiced Federalized faith, forcing what she believes to be right on an entire community, even (and especially) those who do not share her particular sensibilities.

My mother died half a century ago. Momma suffered (I choose the word precisely) a cerebral hemorrhage and left us. I was more angry than sad at the time, and within a week my living arrangements were changed, going from my stepfather (whom I adored, but who had not yet adopted me) to my father and his parents' household.

Fast forward fifty years. A month or so ago, we were having the kids over for fajitas or somesuch, and the Dread Dormomoo and I were in the kitchen talking. Something was said, about what I do not remember and suddenly, there it was. I missed Momma. Half a century later, I missed Momma, and I began to cry like a five-year-old. My sweet wife came over from the sink, enfolded me in her arms, and...was a comfort. I wept...not for long, but enough. I finally was able to grieve for the loss of my Momma, after fifty years. I have no idea what triggered it, and I had no revelations or deep experiences beyond finally grieving. No lessons, just a very strange experience.

For those who have their Mothers, a happy Mothers Day to them and to you. To those without Mothers, remember the good times and the joys, and have a happy Mothers day.
Posted by The Aardvark at 5/12/2013 02:03:00 AM 6 comments:

There is a vast amount of schadenfreude from the proggy side. As attacks on Constitutionally-defined rights continue apace, with legal gun owners having their guns confiscated in places like NY (but not really...no-one is confiscating guns :/), those who wish to abridge my rights are having deep joy as they whittle away. As you giggle whilst infringing on what the Constitution says "shall not be infringed", remember this: as you claim new and unusual "rights" (which by its actions -like licensure- the State defines as mere privileges), if clearly defined rights like gun ownership can be whittled away by political whim, then when the "whims of change" come under future administrations, YOUR pet "rights" may be infringed, whether that be "whatever-marriage" or the right to unlimited rice pudding. A future administration may well push to abolish YOUR favorite rights, and neither Wil Wheaton's tweety angst, nor Michael Moore's fatuous pronouncements will make any difference.

You would do well to support freedom and Constitutional rights, period, rather than cherry-picking your faves. Hanging together versus hanging separately.