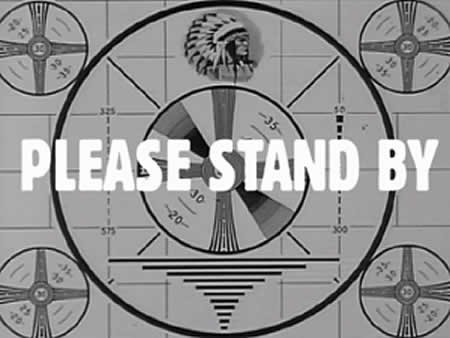 It has been however long, and digital TV is a way of life. I'm not talking about cable, either, but rather broadcast local channels. We don't have an outdoor antenna, just an RCA indoor job. With old school analog rabbit ears, you could watch a snowy but uninterrupted program. Imperfect reception was still followable. Now with digital modern awesomeness, a marginal fringe signal is useless. If the digital antenna is not precisely positioned, you get frozen frames, pixilated images, and interrupted audio. Useless. Bad weather makes it worse.

So thanks, Congress and FCC. You have set TV back over seventy years.


I am dreadfully fixated. I have LOST perhaps the two best things I have ever written. One was the logical ending of a little-known Brit SF series, Joe 90, the other a superhero horror piece. His power is resurrection. He cannot stay dead. The problem: he remembers every death.

If I have sent either story for your perusal, please send me what you have. If not, well, I shall endeavor not to go the Hemingway route.

(WAIT! This is not the Facebook. I do not have to do drama here!)

And yes, I know about backups, and Carbonite. I do them.

Voice of the Martyrs

It redefines irony, seeing the whine machine cranked up so. The people who have rejected five thousand years of covenant history and civilization to redefine human relationships, are now surprised and horrified that anyone would deign disagree, and are suffering for their stance. I see it everywhere on Fa-CHAY-book: the sadness, the pain caused by Sticking Up For One's Beliefs. As the artist must suffer for his art, so the Four Percent and their Rainbow Coalition are experiencing the discomfort and loss of taking the unpopular route.

"I can no longer get the best Southern lemonade to take home and mix with rum".


"I love the sandwiches, but I will never eat there again."


It pains, to see them agonize so.

And my personal favorite:

I suppose that their diversity and inclusiveness does not accommodate people who disagree with their political and social sensitivities. To put it another way:

Disagreement With My Opinion = Hate.

Chik-Fil-A has always been very open about their corporate culture. They are Christian, of the Baptist variety, which generally has little truck with messing with Divine Order. "For this cause shall a man leave father and mother, and shall cleave to his wife, and the two shall become one flesh." Moses wrote it, and Jesus was sufficiently impressed to quote it. How hard is it to understand? The narcissism inherent with the whole gay thing (And having grown up in a homosexual household, I am witness to this, not only in the home, but also from the various orbiters, hangers-on, and moochers who cycled in and out.) bears the fruit of not caring what history or law or religions have said for millennia, but wanting what I want NOW! The attempt to overthrow social norms so as to appear normalized and accepted is paramount.

I have good friends who are gay. I have straight friends. As I have said before, I don't really care what you do in the privacy of your bedroom, or dungeon, or wherever. Not interested. Just don't judge me the way you may claim others judge you. Don't call me "hater" just because I don't want the order of things overthrown for your convenience. Fairness exists as a kindergarten  fantasy, nothing more.

I see lots of pretty-colored pictures online proclaiming gay moral supremacy, and painting every Bible-follower with a Westboro brush (more irony, since the Westboro crowd clearly do not follow Jesus' teaching or methodology) A popular series is making the case for "love", not mere "parts". If this is the case, what problem is there? If coupling odd parts is not in fact the point, lovely. Love who you wish. But this is a dodge, much as popular cults who seek to present themselves as "Christian". It is about Teh Sex. Just like historical marriage is, so at least be honest.

If you want to boycott that Popular Chicken Sandwich, fine. Enjoy your martyrdom. Zaxby's is second-best. Enjoy it. But don't preen and try to come off like Gandhi or MLK. Jr, just because you have changed your fast-food habits.  It is far harder to change a culture built upon five millennia of tradition. We have swung a ways on the societal pendulum. The old order is not happy. Play nice, or the backswing may not be as fun a ride for you. The pendulum can be the pits. 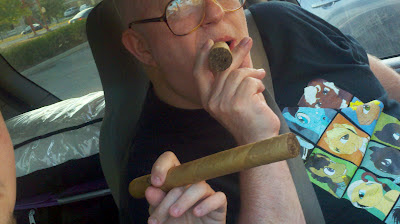 Loen's and my victory cigars coming home from IkasuCon. Really fun stuff. We out-Bernanked Bernanke on that band trip!

As we drove up to the on-ramp, we were lit up, and it were puffing away. We stopped at the stoplight to make our turn, and in the right lane, in a big silver pickup, a lovely brunette lass caught sight of us, grinned real big, and gave an enthusiastic thumbs up. I would have loved to get her to be in a picture with us, but that's the stuff restraining orders are made of.
Posted by The Aardvark at 7/21/2012 11:01:00 PM 7 comments:

Punditry marches on, reliably missing the mark, or any relevant point whatever.


"What were  families doing at the theater
at midnight with  6-year-olds, and 3-month olds?"

Yes, that is entirely the thing to focus on.

What we have is a guy who shot up a movie theater, killing a dozen people, and injuring dozens more. There is a continuum of thinking about the "Why" of it all, from loner loon who was flunking out and needing to  punish the world, to CIA-made Manchurian candidate MK-Ultra mind-control killing machine, turned loose to bring down the Second Amendment. The truth is likely somewhere between (though truthfully, I have frighteningly little problem shading toward the latter, given the Current Administration's propensities). The fact is, though, this is the guy wot done it. He should be the focus. He entered the place all kitted out in oh-so-slimming black gear. He pulled the trigger. He killed the people. He wounded the others. So, how about you focus your impotent ire on him.

...Unless of course he was not the actual person behind the gas mask.