The lettering was done in fluorescent ink, and photographed wonkily. The Dread Dormomoo dood the dragon, lettering and flames. I scanned a photo of Atlanta and printed. Division of labor.
Posted by The Aardvark at 3/25/2012 10:51:00 PM No comments:

"I disapprove of what you say, but I will defend to the death your right to say it" -- Evelyn Beatrice Hall


The title quote (often mis-attributed to Voltaire) defines the concept of Freedom of Speech.  The First Amendment says:


Say it loud, say it proud: FREEDOM OF SPEECH SHALL NOT BE ABRIDGED! The Bill of Rights sez so. So what is with the tinhorn dictators on Facebook and other social sites,  who hear a celebrity or person-of-note say something about a person or Favored Group and start whinging about "hate speech!!"?

"But Mr. Aardvark, sir, aren't they just exercising their right to free speech ? Yes, yes they are, and that is not the point, Johnny Strawman. By invoking an inflammatory term like "hate speech" they place the offending verbage into the set of Things Requiring Sanction. If I disagree with which gender you choose to snuggle up to, which person should inhabit the White House (and why), or whether Han shot first, then my declaration could be consigned to the "hate speech" bin, for clearly, hate is in the ear of the beholder.  If WE do not like what THEY are saying, clearly THEY are using "hate speech". The next step is what concerns me. If it is "hate speech", then it is speech which should not be borne by society, and should thus become banned speech. Shunning the speech is not enough. The anti-censorship crowd would gladly censor those with whom they disagree, in the name of  ridding the world of "hate".

The trouble is, the Constitution forbids such censorship. If I wish to stand in the park and read Mein Kampf aloud, it should be allowed.  Likewise, the book of Leviticus, or the collected works of Edward Gorey. Whether you like what I am saying or not (beyond libel or slander), I have the right to be able to say it. Likewise, even if every syllable that falls from your lips causes me to pulverise my molars, I must defend your right to say on.

The other trouble is, few understand the concept of "authority". The Constitution and Bill of Rights form the authority for our republic, the keel of our ship of state. It is the Law. Our current crop in Washington from the president on...pretty much the whole crew...do not understand authority. They think that authority derives from within, that on the basis that they are a congressman, senator, president or judge, they therefore have the authority to do as they please. Not so. our Constitution is the Bible, if you will, of the republic. As
surely as the Bible is the church's rule of faith and practise. I will not discuss from whence the Constitutional authority derives at this time. Some guy's Real Good Idea must pass Constitutional muster, or not be implemented.

Freedom of speech is a two-sided sword. If you do not like someone's opinion or rhetoric, and wish it to be censored or banned by the regime, hate or not,  recognise that when the Other Side comes to power, they could censor YOU.

So, J.B., here's the pitch: A group of castaways are sucked from their desert island by a lightning-tornado-wormhole thingie. They whirl and twist through a coruscating tunnel of light and energy until they land on the flight deck of a huge spaceship, where the castaways and their kooky first mate are met by the ship's captain, his pointy-eared First Officer, and a crusty doctor. Hilarity ensues.

Title, J.B.? Sure. We were going with a working title of "Gilligan's Trek".


Hear what the Dread Dormomoo saith:

"Children today are not taught to wash their hands after going to the bathroom, or playing with their pets. How can we expect them to know that pre-marital sex is wrong?"

What comes to mind is the question "When does a hotel restaurant cease to even care?". The Ramada Inn which was the location of our convention this weekend had a little restaurant, and when Loen and I rolled out of bed Friday morning after a whopping 4-hour nap, we were an hungred, and went to eat at Justin's Place.

Himself was not in evidence, but had he been so, I would have asked Justin a few things. I ordered coffee, juice, and two eggs over-light, bacon, toast and hash browns.

These are hash browns: 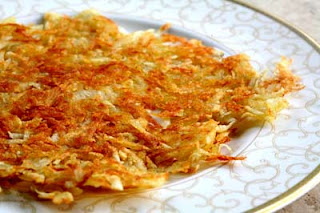 Hash browns are a mass of innumerate shreds of potato fried until crispy. They are what String Theory would be if it worked at Waffle House.
OTOH, these are home fries: 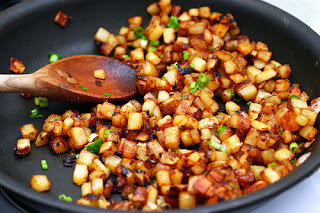 The potatoes I got looked like pan-dried one-inch cubes of potato, fried and dry, which appeared to have been counted onto the plate, rather than spooned. They wept for emollient Heinz ketchup. Or just salt.

They got the eggs right, and the mass of bacon was a treat, but the quantity was likely because the strips just wouldn't come apart. The toast was toast. Cold toast.

There were perhaps five tables being served, with two "servers" being in evidence. At the beginning, my coffee was a long time coming. When it arrived, I waited ten minutes for a spoon to stir it. Mmmmmmm...lukewarm hotel coffee.

(Let me interject here that I am not That Guy. I do not have unreasonable expectations, and I do not consider myself to be a pwecious snowflake for whom the planet revolves. I have been a waiter several times in my life, and know what is involved. I expect servers to be trained to Do Their Job. Hmmmm...mebbe I am That Guy.)

Bottom line: it took too long for the service cycle to complete. Part of the food was not as advertised. Loen commented about his breakfast, being amazed at how hard it appeared to be to toast a bagel.

We did not eat there again.

Here was an inn with a restaurant, which is usually the center of the public face of the hotel, and yet this seemed an afterthought. The hotel was well-worn at the heels, in a truly troubled part of town (the hotel across the street looked neat, but had the reputation of having hot and cold running hookers.) The standout business in the neighborhood was a Dollar General Store. This old Ramada is likely not long for this world, which will be sad. The hotel staff were helpful and polite. The room was clean, so it was not a visit to El Rancho Roacho. The restaurant was just not what the place needed, though it is probably what would be expected.

Another thing I note is the devolution of fannish things. Pop-culture convention-goers are ceasing to be members of Fan-dom, but rather to be members of Con-dom. The Con is the thing, not so much the anime, the sci fi, or the gaming. It may be a function of Weekend Party Culture. I merely observe this. Anime cons are decreasingly about teh anime, and cross-fandom is rampant. Doctor Who shirts are an important part of our con mix, f'rinstance. Every con is becoming a multi-fandom media con rather than hewing to Trufandom, that is to say, the con-goers are increasingly polymath, less focused on a particular show or genre. (I will regret this) Many costumed kids (cosplayers) are appearing as characters from a bizarre webcomic, Homestuck.  Anime cons seem to be the most convivial, being friendly places for Who, Homestuck, anime, steampunk, and Pony fandom to congregate friendlily. Ecumenical fandom. But con-culture as a whole is becoming mixed, blended, frapped. More volume, less substance.

I think that this does not bode well.

Bleeding on the landscape. 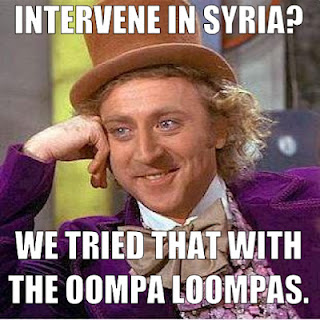 Hello, kiddies! Ol' Uncle Aardvark is in the wilds of Columbus at a seedy old Ramada Inn, warehousing shirts at Anime Punch: Revoluticon. AP is a usually robust springtime con, but this is a smaller relaxacon version, with the big guns coming out in December as AP: the Armageddicon, to celebrate the Mayan calendar thing. We will be there, Itzamná willing (see, you CAN learn new things here!). We have two other cons this weekend, MomoCon in Atlanta, and KawaKon in St. Louis, with varying levels of success. AP is the...least successful so far. We shall see.

So, a Coast-to-Coast guest was talking about the problems in Syria and the uprisings and killings going on, and George Noory asked "Why don't we go in and do something?!". Good old reliable George. The answer should be, "Because it isn't ANY of our business.". Period. Second answer: "We can't afford to.". Either is a compelling argument.  Either is true. Both. Both are. Even if it would be a "good thing" or would "help the poor children", because we cannot afford one more "good thing" as a nation, and we cannot  afford to write another bad check for children not-our-own. Syria's civil unrest is not our business, not our problem.
--------------------------------


Well, after an afternoon of negotiations, Jay and I have come to an uneasy detente. I shall remain an unrepentant infidel in re: the Cult of Haruhi Suzimiya, though I shall watch more of it. Jay shall remain a stiffnecked...jerk...as far as the sublimity of Ponies is concerned, so I guess that very little is different. Plus ça change....

However, we have agreement on one uniting truth: Bono Pizza is less a pizza pie, and more a work of art.


Their 10-inch pizzas are $10 each, or 3-for-$25 (their "menage a trois" on the menu), which would be outrageous from an assembly-line place, but Bono's, now, that is a pizza of a different color! Doesn't matter if you have a pepperoni or a kitchen-sink 'za, it is the same price. The trick is, it is baked in an oven roughly one-fifth the temperature of the surface of the Sun! A wood-burning stove, which cooks the continually-watched and carefully-turned pizza in 2.5 minutes. The yeast dough is made in-store, and is crispy and light;  all of the toppings are fresh, the herbs and veggies bright with flavor. The mozzarella, which comes out looking like marshmallow fluff, it is so pure and rich, is an experience all to itself. As they say, cheap at twice the price. "Gourmet" is a much overused word, but it is correct and accurate, if inadequate, to describe their creations. They use calamata olives, because California black olives are chemically "blackened". The calamatas add a whole new dimension to the classic Pepperoni, Mushroom and Olive pizza!  Peruse the website. Their place is the veritable hole-in-the-wall establishment which virtually insures a taste treat. Should you come to Columbus, OH, go to Bono. Better yet, come to Columbus specifically for Bono's. Tell 'em the Aardvark sent you. Bill, Peg, and the rest of the crew, thank you. You have all pleased the 'Vark! And thanks to Jay for telling us about the place, and driving us there in his venerable Crown Vic. OH! Dessert...We split a Belgian Waffle with fresh strawberries and whipped cream. Loen, Jay and I were happy campers.
Posted by The Aardvark at 3/18/2012 12:32:00 AM 11 comments: