SOON, we may need a FENCE AGAINST THE NORTH!

Canadians have drawn the short straw on the world's latitude lottery: From October to March, sunlight is too feeble for vitamin D production. During this time, our bodies draw down stores built by summer sunshine, and whatever is acquired from supplements or diet...Consequently, by mid-winter most Canadians have depleted vitamin D status. "We're all a bit abnormal in terms of our vitamin D," said Dr. Vieth, who has tested scores of Canadians, something done with a simple blood test. --MARTIN MITTELSTAEDT From Saturday's Globe and Mail

The Canadian Horde will soon be on the move. Doubtless the 'Net will be rife with pictures of kittens in the sand, saying:

It has been an amazingly busy time. It has been non-stop at Aardvark Screenprinting. That is GOOD news for us, bad news for my blogging career. (Pause to cough and splutter)

I have been overwhelmed with EVERYTHING. Couldn't EVEN begin to deal with the VT horrors.
There is too much going on. I canceled my sub to a major news source. I can't deal with it all.
Sorry.

The negativity which surrounds me as far as the world is concerned is becoming impossible to address. I could be blogging twelve hours a day and not be able to handle it all.

Lookit, the BEST I can do for you is to suggest that if Pelosi, Murtha, Reid, and their ilk are so able to solve the Iraqi woes, then I suggest we make 'em happy, bring our boys and girls home, and send themselves over to pacify the region and make it safe for Democracy.


Don Imus has been around since they made radio valves out of rocks.
He has had practice. Prank calls (His Baby Huey call to a diaper service is a scream, as is the Army on bivouac calling in a to go order to Macdonalds), characters like Rev. Billy Sol Hargis of the First Church of the Gooey Death and Discount House of Worship in Del Rio, Texas...like that.

My Best Buddy and Boon Companion in college, Brad Bradfield, had several Imus comedy albums, and would infli....er....share them with us.

Whether you like him or not, Imus is good at what he does, whatever that is.

My son Riatsila (play with the letters, people), was listening to a replay of the Torquemada-fest when Imus appeared on Sharpton's radio show. Mind you, Imus has been at this a lo-o-o-o-o-ong time. Riat listened, and started laughing, perhaps even chortling. He then pointed out the raison for his mirth. He is an artist, but one who has a keen ear, as well as a painful facility with wordplay.

Imus kept using words in his self-deprecation, words like

Standing in the gap.

Poor Don Imus. He is sorry. He is repentant. He even went into the lions den to appear on REVEREND Al Sharpton's talk show. I saw some tape.


He looked very white and small.


Sadly, I must stand in the gap for Imus. He has asked forgiveness, yet the putatively Christian Sharpton and Jesse "Hymietown" Jackson continue to demonize him, and demand his ouster.
So, since my "brethren" refuse to do so, I must Do What Is Right.


Don Imus, I forgive you for your naughty mouth.


I also forgive you for the REAL problem that Jackson and Sharpton have with you.

A Happy Easter to those inclined.

A wonderful Passover past to you of different mind.

A lovely Sunday to all of irreligious bent.

Enjoy the day! All good wishes from your Aardvark sent.

Some Rhode Island busybody had too much time on his hands:

April 7, 2007 — A Rhode Island public school has decided the Easter bunny is too Christian and renamed him Peter Rabbit, and a state legislator is so hopping mad he has introduced an "Easter Bunny Act" to save the bunny's good name.

The Dread Dormomoo heard the news and said:

"Oh! Naming him after the first Pope.That's good."

----------------------
The Restoration movement has as a goal to restore faith and practice to their Biblical roots and limits. Thus, "Easter" is not celebrated per se: no purple draped crosses or pageants. The Resurrection we celebrate each Lord's Day (Sunday, the first day of the week) in meeting together to partake of the Lord's Supper, as the first century church under apostolic leadership did.

I don't have a prob with Easter, personally. I see Easter and Christmas to be useful holidays, both as reminders, and as opportunities to speak to a culture which becomes nominally more aware of its Christian roots at those times.
I wouldn't drag the Bunny into the sanctuary, but I am not above being utilitarian in my evangelism, using what's at hand.

Paul kinda did that. Not a bad model to work from.

Aardvark, do you think people's behavior has turned for the worse over the years?

Now, THAT'S a question. As this is my blog, and my opinion reigns supreme:

But a yes with caveats.

"Yes", because there are more people to behave badly, and more to interact synergistically, badly.

"Yes", because people have longer lives, and can get really good at being bad.

Violinist: How do you get to Carnegie Hall?
NY Cabbie: Practice.

I believe the accounts of longevity prior to Noah. In rejecting God, the people's thoughts "were only evil continually". When you live nigh unto a millennium, you can get really good at being really bad. (I also suspect things like the Cydonia Face are remnants of pre-Noahic technology.
With an 800-year lifespan, an Einstein could have developed a relativistic drive, or at least an atomic drive to get us there. How long did it take to go from horse-and-wagon to One Giant Leap for Mankind? This is mere speculation though, and perhaps I should keep it under my tinfoil hat.)

"Yes", because people have cut themselves from moral and spiritual moorings, and by that, self-control, through a cultural rejection of Biblical teaching. Like it or not, the strength of the West has lain in its Biblical Consensus. America has not been a "Christian Nation" (darn hard to baptise a landmass). I could argue that the concept is not tenable, but the fact remains that what governed The West was an overall "Judeo-Christian" mindset, with Biblical underpinnings in intellectual thought, common law and jurisprudence, and man-on-the-street morality. Francis Schaeffer and others have documented this ably, and I recommend Schaeffer as a start.

"Yes", because public behavior has coarsened, with...unpleasant results. Road rage was not a phenomenon when I was a kid. Public discourse has degenerated to who can out-F-bomb the other. (Yes, I have a problem with public vulgarity. It is low, demeaning to the speaker and the hearer, and unnecessary. And Jesus making a godly assessment of the Jewish leaders' character as being "sons of snakes" is NOT equivalent to my calling someone an "S.O.B.").

"Yes", because the church has become a Voters Auxiliary. Our proper mission is making disciples (telling folks how to live, and then SHOWING them how to do it. Jesus walked, talked, camped out, preached and taught with His disciples for three years. We drag 'em to a crusade, "get 'em saved", and ensconce them on a pew. NEXT!), NOT marching on Washington, or Montgomery. Can and should a Christian vote as an individual? Likely so, but the church's purview is not to be a Voting Bloc. 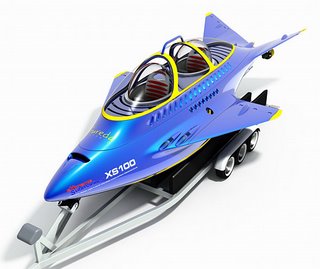 Is this not awesome
in its extreme awesomosity?

Here is the link.


Overall, I find SciFi Channel to be as cutting-edge as tapioca pudding, but occasionally they have some neat reportage on their website.

I got cable originally on the strength of the provider having SciFi Channel (or as Tony Papagermanos, a Greek nuke engineer I worked with said, the "Skiffy Channel". I miss Tony...a really nice guy, and personable.) This was back when they showed classic science fiction shows from the 50s and 60s, and it was the ONLY game in town for the Anderson shows like THUNDERBIRDS.

Alas, aside from a few stars in an otherwise paste crown, like The Dresden Files,
and Stargate: Atlantis, most of what they offer is Canadian-flavored Jello Instant Pudding with bad CG effects. Hey, at least Marina Sirtis is getting work. The best thing they do now is showing rather decent cancelled shows from UPN.

Instead of serving up fine cuisine, SciFi is diving in UPN's Dumpster.

Mmmmmmmm....pass some of that out-of-date baloney!

I abhor the cheesy Christmas-also-ran nature of the holiday. Christmas's poor cousin.

Easter trees are an abomination!

Being of a frugal nature, I resist the guilt-trip-inspired splurging on goodies, but I recently hit upon a plan. My younger kin have rabbits. This being a bunny-intensive season, I stole their rabbits and hid them. They are well-fed and cared for. It's been a couple of weeks, so the tears and sniffles have stopped, and therapy sessions have not yet begun.

Imagine the smiles of joy and relief come Easter Morning when I present them with their bunnies, their very own much-loved bunnies, as my Easter gift to them. I can hardly wait!

Wow.
I am SUCH a layabout.

Sorry for the hiatus. We have been snowed under with our business, and I've been unable to make time for all my reader.