I wanted to share this most excellent news with you.
Go get this film. Really.


If you like cops and robbers, you will LOVE this.

If you enjoy great animation, well, this is a feast.

If conspiracy stuff is your bag, then put on your aluminium-foil hat and break out the Jiffy-Pop - which has its own tinfoil turban!

Romance? This is your movie.

Heroics and derring-do? This is it!

Adventure and hair-breadth escapes? Lupin (loo PAHN) is your man!

Martial artistry and gunplay? You can bet your NRA card that you will love this.

Egregious cinematic disregard of the laws of physics? Get ready to kvetch and whine...but you'll STILL enjoy the movie!

"...One of the Greatest Adventure Movies of All Time..."
-- Steven Spielberg

Chicago, IL -- Before he enthralled audiences all over the world with such magical animated features as Howl's Moving Castle, Princess Mononoke and the 2001 Academy-Award™ winning Spirited Away, renowned Japanese animator Hayao Miyazaki held audiences spellbound in 1979 with his first feature-length animated film, The Castle of Cagliostro. Now, Manga Entertainment, an IDT Entertainment company, proudly presents The Castle of Cagliostro Special Edition DVD, digitally remastered with Dolby Digital 5.1 sound, available August 29th at the enchanting SRP of $24.98. Pre-book is July 19th.

The Castle of Cagliostro (also known as Lupin III: Cagliostro No Shiro) spins the fantastic tale of master thief Lupin III, traveling to the European province of Cagliostro (pronounced “Cal-ee-os-tro”) to pull off a huge job. When a chance encounter with the Princess Clarice, engaged to the evil Count Cagliostro, distracts him from his original plans, he also stumbles upon a secret kept for over 500 years and now struggles to keep one step ahead of Cagliostro. Torn between his professional objectives and his increasing affections for Princess Clarice, Lupin is locked in a race to solve the mystery of a fabulous hidden treasure, dating back to the Renaissance...

Filled with Miyazaki's trademark rich animation and imaginative storytelling, The Castle of Cagliostro Special Edition DVD takes the experience even further with a treasure chest of bonus features including:
Posted by The Aardvark at 8/29/2006 01:37:00 AM No comments:

Hey, if you are a fan of Supermarionation series like Thunderbirds or Stingray, you will get a larf out of this:

Email ThisBlogThis!Share to TwitterShare to FacebookShare to Pinterest
NOPE! 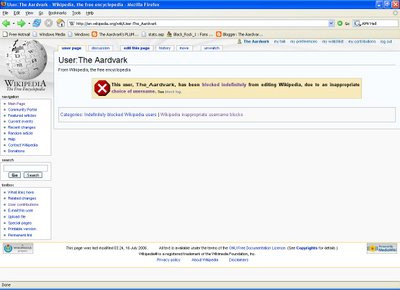 I dearly love the concept of "Zero Tolerance". It completely removes the need to use judgment, or to make case-by-case assessments. Like the poor tykes who get thrown out of school for having a 1 cm G.I.Joe solid plastic pistol in their pocket. I heard of one child removed for wearing a shirt with the image of a gun emblazoned thereon.
Yes, he endangered scores of lives with a t-shirt.

Wikipedia is a Good Idea held hostage by ZT. I signed on and did a one-word adjustment to an article on R.J. Rushdoony, correcting the entry based upon Rushdoony and company's own writing, (I substituted "Theonomy" for the incorrect and biased term "Theocracy") whereupon I was blocked indefinitely, not because of egregious inaccuracy, nor bloviating obnoxiousness, but because of my nomen. "The Aardvark" is a handle perilously close to a banned vandal yclept "Blu Aardvark". One of the admins took it upon herself to Play Mommy and remove the threat I posed by using my Somewhat Well-Known online and business persona. Being an apparent Good Leftist, she did not respond to my Reasonable Appeal, but rather used the excuse that she would be tarred with the same brush if I turned out to be Naughty, and she had not pre-empted it. A Nanny Statist for sure.

My shop is an oven...literally.
Our new curing oven works VERY well.
We don't have the automatic press up and running yet. Some ancillary systems need setting up...air line, wiring...like that.

We are headed to MechaCon in Louisiana this weekend, Riatsila and I.

Which Harry Potter Character Are You?

You are FRED AND GEORGE WEASLEY. Although you are a lovable goofball, prankster, and slacker, you're no idiot. You are extremely intelligent; you just don't always show it. You like to be funny and goof off, but you also have strong convictionns and know when it's time to be serious. Dedicate yourself to something you love, and you will most likely become very successful.
Take this quiz!

Great anime convention. Riat and I are tired and happy. My middle son and I were in Orlando for five days at the excellent Wyndham resort. Anime Festival Orlando was the event, and we went beyond our expectations!

(And Pretty Lady...we stayed an extra day. To do NUTTIN!) We took Monday off, slept til 10:30, got up, breakfasted, played tourist at Ripley's for a couple of hours, then walked back to the room, watched anime and dozed for three hours, then walked more in search for grazing material. We looked at a Japanese restaurant, but i did not wish to take out a second mortgage for sushi. Wound up at a Mexican place. The fajitas tasted like they used cuts like ribeye. Very nice.

We also ate in very low places over the weekend. We went to one of those notorious feedlots, Golden Corral, with fellow vendors. Originally a family steakhouse, it is now a restaurant that specialises in throughput; also one that does many things not very well. We saw, too, that it is not a fools errand to stock 5X t-shirts. One enters through a queue reminiscent of what cattle enjoy on the way to becoming T-bones. I swanee, I actually "mooed" in line.

One can get many foods there, from steak (their grill reminded me of the chophouse scene in "The Road to Wellville") to turkey, shrimp, pizza, assorted overcooked vegetables, yeast rolls, and desserts, desserts, desserts.

I expected to see a Kanamit come out from the back with his "To Serve Man" book tucked under his arm.