Since this is the season for relating miracles.

I've had something of a bad week.  Not only was I trying to ward off a cold, but the sort of job I'm doing now meant that, more often than usual, I was being hammered with he waste dump which our people seem bound and determined to turn Christmas into.  Hour upon hour of authorizing credit card protection plans for people who, more often than not, were all to anxious to rush to the shopping mall.  The closer it got to Christmas the more rudeness I seemed to encounter (as well as every possible spelling of Ashley, Caitlyn, Kelly and similar names).

I reached my bottom Tuesday night when I partook of a Christmas ritual and watched the 1971 animated version of "A Christmas Carol" (directed by Richard Williams and produced by Chuck Jones).  I heard the words of the Ghost of Christmas Present and, for the first time in my life, I was actually crying.

And then God tossed me one of His occasional bones in the form of Patricia.

Every so often I'll get a call from a potential customer who is in a mood to chat.  These are invariably from folks my age (or older) and they have something they wish to relate.

Patricia was one of these people.  Rather than tersely demanding action in regards to her new credit card she was blessing me with "Merry Christmas" and inquiring as to how my holiday was going.  She possessed an extremely friendly voice, a cheerful nature and a genuine bell-tone like laugh (which appeared often).  She and I had never met . . . would in all probability never see each other or speak again . . . but we immediately became close and dear friends and chatted.  She offered suggestions on what I should get Denise for Christmas, and I asked her how her tree was decorated.

During the course of the conversation I learned she had been a widow for several years.  I offered commiserations (and, if the call had not been monitored by the Company, I would've commented on how her husband probably died with a smile on his face).  But Patricia wasn't sad or regretful, and I realized that this person would never lack for companionship or genuine affection.

Regrettably . . . very regrettably . . . the call had to come to an end.  And no, I wasn't able to sell her the credit card protection program.  But it was of no consequence.  Paychecks . . . W2 statements . . . what of it?  The Ghost of Christmas Present had passed his torch over me, and I had received some of what it offered.  God had restored to me what I thought I had lost, and what I realized I would never utterly lose.

The schizophrenic season of Christmas presents a cultural riddle to the rest of the world. Reduced to the basic idea, God, to reconnect with, and provide reconciliation between Himself and rebel humankind, is born into this world miraculously as a baby, a baby born to die because of that same rebellion, because God desired reconciliation with our estranged world.


Remembering the birth, life, death and resurrection of the infant King who grew to redeem us, I wish you all a happy Christmas, and the peace of Christ for you and yours.

This is the best Cultural Christmas Card Present I could give.
Happy Christmas to all my Plumbline friends and fiends!!

I have been obsessing over a cartoon. I have written of it before. Format Films' The Lone Ranger keeps coming back, and I have been watching it during late-night print runs. It goes far beyond other 1966 kidvid drek. The animation was done by the venerable Halas and Batchelor studio in Merrie Olde, they of the first animated Animal Farm from the '50s. This is animation for Saturday Morning, so don't expect Studio Ghibli, here, but stylistically, TLR easily transcends its humble setting, a gem in a dimestore ring.

The background work is worth the price of admission, ranging from watercolor washes to torn construction paper for texture. The characters are spare, with the dispassionate faces of Greek statuary. The villains, well, they are superb, from Mephisto to the Warlock, to Mr. Happy (voiced by Gildersleeve his own self!) to Terrible Tiny Tom, the Doctor Loveless of the piece. Screenshots later.
The grandiose weaponry presages the steampunk enthusiasm four decades ahead.

Here is the open, and an episode. Revel in Vic Schoen's score!


Is the boss outlaw's voice Jonathan Winters, or a subdued Jim Backus? He is not credited. I'm leaning toward Backus.

Who Would Jesus Torture?

That is one of the most pellucidly stupid questions ever uttered, both the sense of it, and the motive for it, because it betrays one of the most basic flaws in Christian (or religious) thinking. There exists differing things authorized for different groups in the New Testament (this betrays my apriori assumption that the Bible is authoritative in matters of faith and practise.) In church life, there are three groups involved, at least in this case. First you have individuals, then the church (local congregation, then the State (or "Caesar"). Each of these groups has Scripturally authorised abilities and spheres of influence; differing jobs, if you will. In money usage, for example, I as an individual Christian may do as I like with my money. It is mine as long as it is in my possession (and as to Facebook theology "Well, it REALLY all belongs to God....", no. Peter told Ananias that as long as he kept his money, it was his to do with as he wished -Acts 5:1-11). I determine what I do with my money. Once I deliver some to the local church in an offering, different rules apply. Scripture gives example of uses of a congregations offerings, and it appears to be quite narrow, helping true widows and orphans in the congregation, giving aid to indigent believers elsewhere, and the support of evangelist/teachers locally and on "mission" journeys. What I as an individual may do charitably is broader than what the congregation may do.

As to censure, and the "church court", if I see a brother falling into an unhealthy lifestyle, rebelling against the counsels of God's Word, I may speak to him. If he will not listen to me, then I may bring someone else with me to speak with him. If he rejects that, we take him before the church. If he rejects the church's judgment, "let him be to you like a heathen and a tax collector" Matthew 18:15-17 As an individual, I may not censure him. The congregation and its leadership has that authority.

But what if he kills someone? Same rules apply. The church, however may not apply Ultimate Sanction, execution. The State alone has that authority. Romans 13 teaches:

Do you want to be unafraid of the authority? Do what is good, and you will have praise from the same. 4 For he is God’s minister to you for good. But if you do evil, be afraid; for he does not bear the sword in vain; for he is God’s minister, an avenger to execute wrath on him who practices evil.

The State wields the sword against evildoers; it has that authority. I do not, nor does the church.
(The individual may protect himself and others...that is a different issue). Jesus would not have wielded the Civil Sword; His Kingdom is not of this world. Nor would he have waterboarded, nor let a dog bark close to a prisoner, nor applied heat to soft tissues. Right or wrong, those things are the purview of the State. I am not seeking to argue whether any of these practices are right or proper, or not. 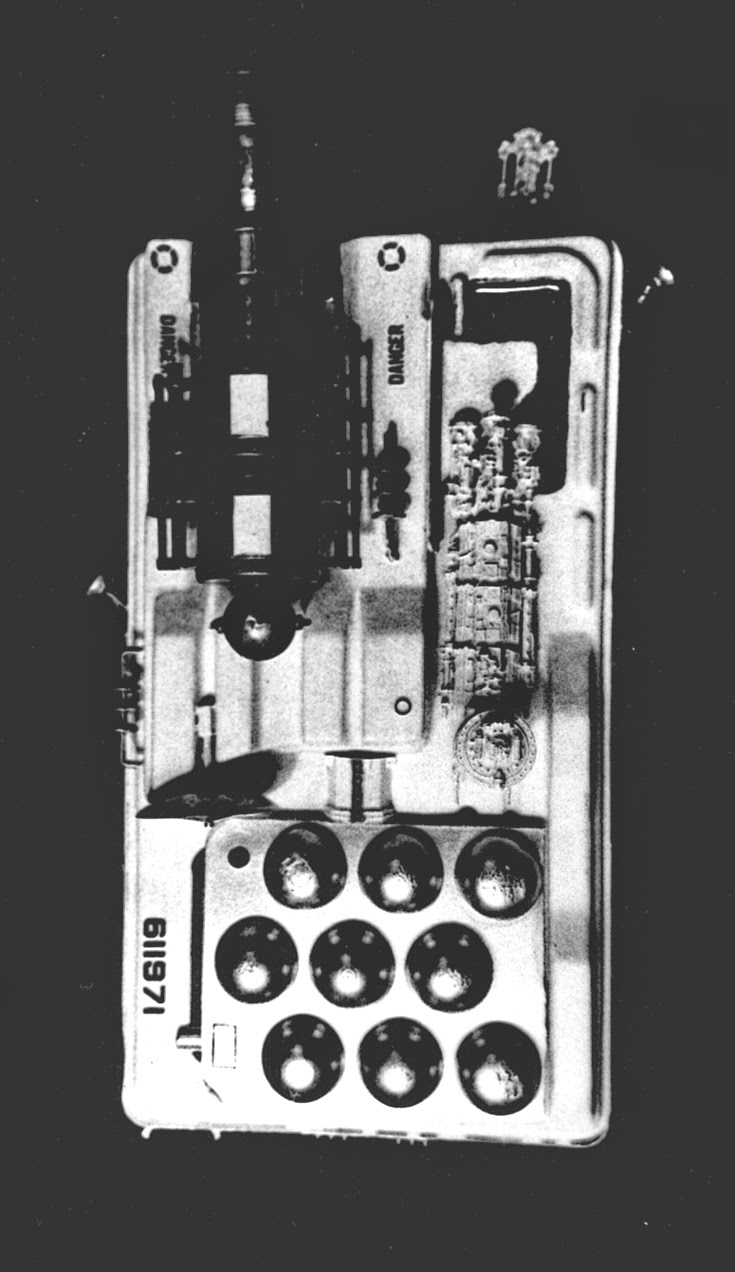 Did this back in college, using kit-bashed parts and the packing bits from IBM typewriter ribbons.
Also added a couple of white-metal ships, carrier-style;
Boanerges-class Destroyer. The GodSword.

Reminds me of th' taste of wild hick'ry nuts....

Your Humble was an Environmental Studies Major at a small Southron liberal arts college in the late '70s. Compost, Sustainability, and Buckminster Fuller. We worked out a recycling system for small towns that would use organic waste as compost-fodder (perhaps using methane produced from landfill arrangements as well). Local farmers could get low-cost organic fertiliser to spread on their land, building the soil over time. We were serious about this, until the End-Times bug bit hard, and well, you don't polish brass on a sinking ship....

When ultimately I saw Big Environmentalism for what it really was, an anti-Western civilisation doctrine -anti American, to boot (Is it a surprise that when the Soviet Union collapsed, the Reds joined the Green parties? The goals were congruent.), it made me want to set fire to a stack of truck tyres! Hornswoggled, I was!

But we were not a grimly earnest lot, singing "Kum Ba Ya" and "This Land is Your Land" as we scrubbed the manure from under our nails. We had fun. One of our friends, Brian, had an amazing product idea, in keeping with the overalls and sandals crowd. You take pine sawdust, sterilise it, cook it, add maple and natural sugar, freeze-dry the lot, et voila!, you have a high-fibre breakfast food, packed with a forest-full of flavor!

Woodsy Morn. The maple-flavored instant fibre cereal. Add boiling water, let it sit for 3 minutes, add butter, and each morning will give you 1398% of your weekly fibre needs. Just needs Andy Griffith to do the VO of the commercials. "Mmmmmmmm-MM!