Ran across this leetle gem over at The Booksteve Channel blog. He celebrates pop-culture of the '60s and '70s, through the eyes of his own youth. He has several blogs, including 1966 My Favorite Year. 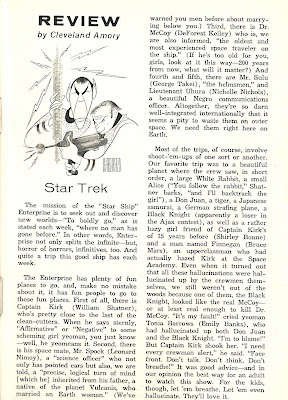 The Hirschfeld art alone is worth the price of admission. I had forgotten how much I enjoyed Cleveland Amory's TV Guide reviews, even as a yout'.

Svengoolie's offering last night was "The Invisible Ray", starring KARLOFF, and Bela Lugosi. By 1936, Boris Karloff carried enough weight to be billed by his last name, which ticked off Bela Lugosi no end. Lugosi was originally approached to be the Monster in the original "Frankenstein". He wanted lines, and did bot want to be covered up with makeup and appliances. Karloff did the role, and the rest is horror history.

The movie (which could be titled "Janos Rukh and his Electronic Retroscope") opens with Rukh (KARLOFF) impressing the scientists who had previously called him...*GASP* unorthodox *swoon*. He has captured a Ray (the movies loved "rays" around this time) from Andromeda. He can tippie-toe back along the Ray and see back in time. He sees a glowing meteor approach Earth and strike.

Lugosi and Co. suggest a joint scientific expedition to Darkest Africa, where with the aid of a bunch of native bearers, Rukh (who is still played by KARLOFF!) discovers "Radium X", which is not the Shaving Cream Atom. He becomes poisoned and all glow-in-the-darkey. His beautiful young wife wants to see him, 'cos it's been weeks, but he must feign disinterest, because his touch causes instant death, and spurning your wife, driving her to a younger man, is infinitely preferable to telling her your problem, gaining her renewed love and sympathy.

The African bearers are freaked out and want to leave. Rukh, in his first hint of ca-RAZY, tells them to look at a huge boulder. He aims his Radium X projector at the rock, and proceeds to melt it to slag. If the bearers run, he will do the same to them. Such labour relations!  This scene involves the neatest special effect. The rock is apparently made of dirt and clay. When Rukh focuses his device on it, internal water jets cause the "rock" to begin to dissolve, until there is only a small pile remaining. Very effective practical effect.

The poisoning, which is allayed by regular injections of a serum developed by Dr. Benet (Lugosi, Bela Lugosi), still turns Rukh into a paranoid freak who feigns his own death in order to kill all the members of the party, thinking they stole everything from him. (Benet and Co. took the Radium X and use it's mysterious healing powers to heal the sick. Because RAYS!) They ethically inform the press that Rukh discovered it all, and he received the Nobel prize in absentia (this before the crazy phony death thing). Rukh maintains that they stole his discovery regardless, which drives him to his mad scheme.

I shan't spoil the whole thing. IMDB can do that for you. A fun Jiffy Pop movie.

Apparently Janos Rukh and George Bailey are half-brothers. Beulah Bondi plays mother in both this and in "It's a Wonderful Life."

proving he WAS crazy!