I have been watching "Space Patrol" at the shop as I print during the wee hours. "Space Patrol" was a Brit "LowRentMarionation" production from Roberta Leigh and Art Provis, both of whom are inextricably linked to Gerry Anderson. Leigh had hired a nearly-bankrupt Anderson to film a series of twaddly kids' puppet shows, "The Adventures of Twizzle" in 1957, followed by "Torchy the Battery Boy". Provis was a cautious soul, while Anderson was more adventurous, and their AP Films company which was formed to do television adverts, and went on to do "Four Feather Falls" and "Supercar", dissolved amicably over their differing styles. (Provis did the filming for "Patrol", and his parsimonious nature shows in the low-budget ship sets, composed of silver-painted cardboard tubes, styro fruit box dividers, surface-strung wiring, and pegboard.)

The brave crew of the Galasphere 347 (seen here taking off)

were reassigned as "Planet Patrol" here in these United States, as a live -action SF series already had claim to the UK title. Larry Dart, an Earthling, Slim, a Venusian, and Husky, a Martian, crew the Galasphere 347, flying through the Galaxy (which is Leigh-speak for "solar system"...22nd century technology was incapable of intergalactic, much less interstellar flight. Puttering around our Sol system required time spent in "The Freezer" in cryo-sleep, to cut down on the need for vast food storage aboard).

YouTube has a number of episodes, likely ripped from the DVD release.

Not bad stuff, if rough around the meson drive. I like the robots. They look so...robot-ey.

Compare their visual quality with that of "Fireball XL5" by Gerry Anderson's crew.


Nonetheless, "Space Patrol" has excellent long-shot visuals. The city housing the HQ, with it's tube shuttles and moving landing pads is beautiful.

The characters are well-defined, and their interactions have the peculiarly British teasing give-and-take. Col. Raeburn is always giving Prof. Haggerty grief over his experiments, and his attempts to grow hair on his encroaching baldness. Haggerty, being the Mad Irish Genius, blows his stack with predictable regularity. Husky, the Martian crewman, is perpetually hungry, having a penchant for Martian Sausages. Slim, the slight Venusian crewman, a sort of mildly emotional Spock for the show, admonishes him for his constant attention to his stomach. Larry Dart, the captain and hero, is a a firm leader, but not above joking with his crew, and poking fun at the pretensions of Commander Raeburn.

A Muddle of Meanderings

President Obama, sir:
Could you drag your attention away from your vacation, and address the plight of the flood victims of Louisiana?
Please?

When exactly did it become chic for churches to refer to their locations as "campuses".

Knew an artist who died of exposure.

Dear people writing about Olympic awards.
The word is "MEDAL". With a "D".
Not "metal".

Mr. Trump has said in a droll aside that "Maybe the 2nd Amendment people" could do something about attempts to abolish the 2nd Amendment.
Which is why the founders put it there in the first place.
It was not a call to violence. It WAS a recognition of the historical point of the 2nd Amendment's inclusion in the Bill of Rights.

Again, STAHP with the 12-year-old arm-flailing.

Something landed on my arm at the shop the other night. It was either a huge mosquito, or a very small sparrow.
Black, about an inch long, poised to feed.
I changed her mind permanently.

I love that so many comedic social pundits are also trained, licensed mental healthcare professionals.

Please, put pressure on me as to the overwhelming need in your lives for me to do blog radio again. My studio has become a closet, and I need...encouragement... to wade in with the excavation of the room.
Considering a YouTube thing as well. Everyone needs to see my phiz.

I acquired, through devious and fell means, a set of Jack Webb's unsung series "Project UFO", a dramatisation a la "Dragnet" of the Project Bluebook Air Force investigations of UFO sightings.
It is far better than I remembered. The "saucer" models are detailed, but a bit dodgy, as though the FX people did not read the completed scripts. This WAS coming off of the "Star Wars" special effects bump, so everyone was trying to outdo the rest. Brick Price did a lot of the model work. Acting is as expected from a Webb series...good rapport between the pair of investigators, and a familiar cast of Webb stable character actors.

Friend Laura Caneer settles the matter:
"The Jack-in-the-box of our childhood is the can of biscuits of our adulthood."

All the people who whinge about there being NO choice, that they are ALL idiots...
Just don't vote.
Easy peasy!

There is endless back-and-forth about the new Godzilla having a PURPLE heat ray, instead of BLUE.
Where is BLM on THIS heady issue?

Noeru and I finished listening to "That Hideous Strength" by C.S.Lewis on the way home from Chicago. Been a favorite of mine (the whole Space Trilogy) since my freshman year in college. It is the purpose of the other two books, "Out of the Silent Planet" and "Perelandra". It reads as though Lewis had been reading current headlines, just not in a tiresome Modern Evangelical Fiction way. The roots of our post-modern scientism were deeply grown in 1945, and only the technology has changed. Belbury uber alles.
Tolkien did not care for it. He referred to the work as "That Hideous Book", which was so clever that I hooted when Noel told me, and is why I do not resent Mr. Tolkien for not liking the thing.

This is a weatherhead: 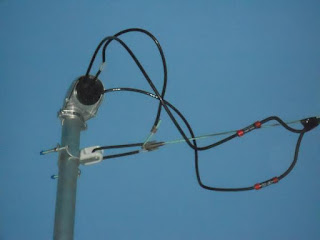 The contrivance at the top of the conduit keeps water out of the electrics of your home.

Years ago, I worked for a plumbing and electrical supply company, and often waited upon several codgerly electricians. One of them, Phelix Appleton, was of the "wet your finger and stick it in the socket to see if it was live" school. Phelix upon learning my name, dubbed me "Weatherhead". Sadly, this became prophetic, as I now have a weatherman living in my head, who painfully alerts me to high-pressure fronts moving through our area. This week I have had three days of it, two of which put me in bed, as all of my attention was fixed upon the Offending Sinus.

Hamlet's "thousand natural shocks that flesh is heir to" comes to mind.

The storms presaged by this offense to my person are almost here. I await them with great gladness. It has been a decade since I have had to contend with this particular thing. Thankfully, it is less frequent; aspirin and phenylephrine go a long way toward masking the symptoms. I suspect it has been the hot, dry N. Alabamastan weather that has set up the situation this summer.

I hope that your summers have been good, and that you are well and safe. The political landscape begins to resemble Hiroshima, post-A Bomb. Maybe THAT'S where the headaches are REALLY coming from.