Thus I celebrate my wonderful con neighbors, Horror in Clay.
They do tikiware, with a Lovecraftian twist! Go enjoy the website, and may you be first eaten.


Fascinating, Captain. I am endlessly amazed (see, my eyes are WIDE!) at the micro drama at the elevators. "Is this elevator going down?" 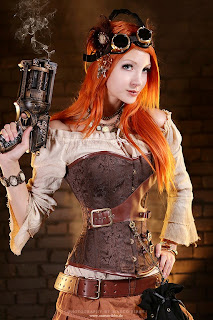 The suffragettes and proto-feminists chafed under the bondage bone and steel corset stays, and they went the way of button-shoes. Now corsets are a trendy fashion statement and cosplay accessory. Just not in the kitchen.
---------------
More tomorrow.
Posted by The Aardvark at 2/23/2013 05:39:00 PM 2 comments:

So, the Aardvark  is north of Atlanta, displaying shirts at AnachroCon, the region's premiere Steampunk convention (a totally subjective estimation. I am willing to be corrected.) The con has just opened, and as Steampunk attracts The Older Fan (and might I add, the Literate Fan), the madding crowds have yet to descend, because they work.


It has been a Sisyphus week; a large Rock, and too much Roll. We are thankful for the business, not so much so, the things which militate against Getting It Done. These things keep me from doing the bloggish bit as well, though this may not be quite accurate, because I have spent an uncomfortable amount of time on Facebook making right what once went wrong. I am one of those with the unfortunate belief that if YOU present an opinion in a public forum, then YOU are inviting discussion and debate from ME.


Wrong-o, Mary Lou. Mind you, I am not That Guy who trolls comments to Fix that person, but I do enjoy a lively but civil back-and-forth. Oh, well.