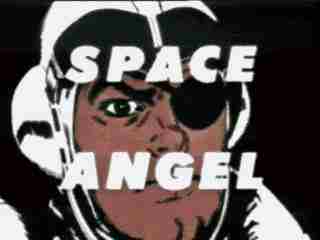 I've been wallowing in nostalgia, and I really don't understand something.
Why is it so chic to hate Space Angel and Clutch Cargo?

I have been watching a DVD and a VHS tape of episodes, and I am amazed at how GOOD they were, especially for WHAT they were: cheap kids TV fodder.

Clutch Cargo was a pre-"Raiders" globe-trotting adventurer who flew a 1929 Bellanca C-27A Airbus. His kid pal Spinner, with his dachsund Paddlefoot, accompanied Clutch in his feats of derring-do.

Space Angel was a 50s-style space opera with amazing, gorgeous SF art by Alex Toth.
Click on the image on his site to go to the next image.

The trippy thing about these series -besides the ummmmm...minimalist animation, is the
Synchro-Vox process whereby the voice actors' mouths were superimposed on their character's faces. It was accurately done, by and large, and added some dramatic touches, what with being able to bite one's lip in concern.

The art was done by hugely talented comics illustrators, like Alex Toth, and looks great- especially Space Angel.
Neat stuff, in an unusual niche.
Clutch Cargo is available on Amazon.

I'm hoping for SPACE ANGEL next.