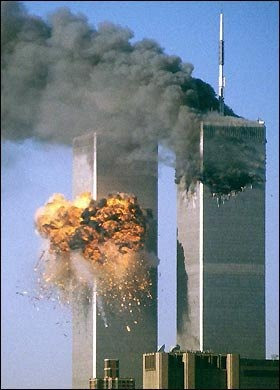 Welcome to our annual national scab-tearing day, the day we remember when those terriss, ably guided by an unwashed Arab hiding in a cave in Afghanistan, pulled off a GENIUS coup, symbolically (and almost literally) bringing the world's leading Western economy to a standstill by using passenger airliners as manned cruise missiles. I will ever remember waking up to Rick and Bubba on the radio giving commentary, so I upped myself and hied me to the living room where the news was showing the horrors occurring in NYC. Then I heard about the Pentagon, and then the Pennsylvania field.

DAMN those evil terrorists. A thousand Muslim hells be unto them. The vitrification of Afghanistan and wherever else would have made a lovely, gently glowing monument to America's swift judgement of those who would DARE strike our Homeland, for that was the term given life by the Powers who watch over us, however imperfectly, from their eyrie in Washington DC.

And soon, the masterstroke of Legislation was cobbled together to grant us security and safety, wrapped in a virtual flag: The Patriot Act. But wait! Seems the Act has been a Bill Waiting to Happen, waiting for the Right Circumstance:

The next year, months before the Oklahoma City bombing took place, Biden introduced another bill called the Omnibus Counterterrorism Act of 1995. It previewed the 2001 Patriot Act by allowing secret evidence to be used in prosecutions, expanding the Foreign Intelligence Surveillance Act and wiretap laws, creating a new federal crime of "terrorism" that could be invoked based on political beliefs, permitting the U.S. military to be used in civilian law enforcement, and allowing permanent detection of non-U.S. citizens without judicial review. The Center for National Security Studies said the bill would erode "constitutional and statutory due process protections" and would "authorize the Justice Department to pick and choose crimes to investigate and prosecute based on political beliefs and associations.


"Biden himself draws parallels between his 1995 bill and its 2001 cousin. "I drafted a terrorism bill after the Oklahoma City bombing. And the bill John Ashcroft sent up was my bill," he said when the Patriot Act was being debated, according to the New Republic, which described him as "the Democratic Party's de facto spokesman on the war against terrorism." (CNET.com)


This is how the massive bill was written in twenty days. It already existed in main, thanks to Sen. Joe Biden. Knowing this troubles me. What security has it provided me?

I am secure in the knowledge that the TSA, under the authority of the Department of Homeland Security, can and will either take "naked" X-rays of me and my wife should we travel by air. Should we choose not to be fricaseed, we are secure knowing that either or both of our genitals will be fondled by strangers in the Name of Homeland Security, because clearly Bin Ladin is hiding there, as we have seen no pictures of his death.

The government is authorized to spy on its own citizenry without warrant. The President can declare any citizen an enemy of the State, a terriss, and can order him executed by Presidential whim.

Shall I continue? It is late, and we must be ready. As to the masterminds and tools used in the 9/11 attack, again I say damn them. A thousand hells be unto them.

I'm just not as certain who "they" are anymore.

Make of it what you will. From the clown pageant of the "W" years, to the clean, articulate years of O'bama, I have little trouble believing anything  from our servants in DC.

The "national soul" is whatever our peerless leaders say it is 'n donchew fergit it! You obviously have no faith in our leaders 'n prolly qweston everthin' they do in pertecin our country.