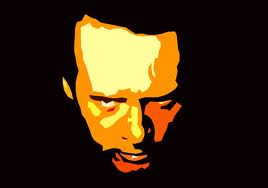 There is a precious meme galumping across Facebookland, where people show off their cognitive dissonance, or their outright stupidity, by becoming a Group's poster children for reading dysfunction. The darlin's identify themselves as "One of the 47%", a reference to a comment made by George Romney at a fund-raiser, speaking to people from whom he wished to raise funds because they had the wherewithall so to fund. He said at one point 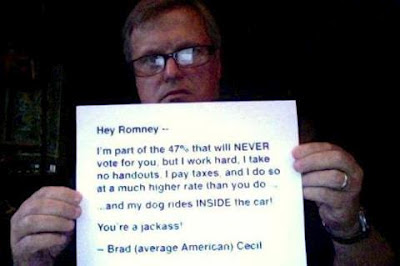 Mr. Angryman Cecil has defined himself out of the scope of Willard's comment. In short, he is NOT one of the 47%. Here is another: 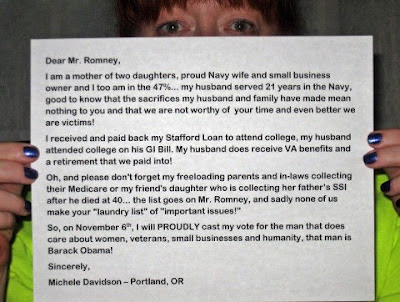 Mrs. Davidson, of Portland, OR (a bastion of conservative thought), also betrays an inability to read with comprehension, if indeed she read or heard the original at all. She has also defined herself and her family right out of the number she claims so proudly. This series of pictures (and there will be more, oh-so-many more) has all the marks of an organised propaganda to preach to the choir about what a terrible person Romney is, going up against St. Obama the Clean and Articulate.

What, Mr. Wolff? Why yes, "Well, DUUUHHHH" is an appropriate response to my revelation above.

Arrowing to the point, the capacity for people to number themselves, or to include themselves amongst a number, is a curiosity to me. The past year, we have been treated to the 95%-ers, and thus to the 5%-ers, and now the improbable 47% is wobbling about, seeking to find some political purchase on the cratered landscape of Opinion. People craving to be A Number.

I would prefer to be numberless, for to seek Numbering opens one up to the risk of the wrong Number (and I am not going all Left Behind on you, here), being with the wrong crowd, thinking the wrong thought. "The Prisoner" presented to us Number Six, a man who eschewed, no, projectile vomited  the idea of being catalogued numerically by anyone. 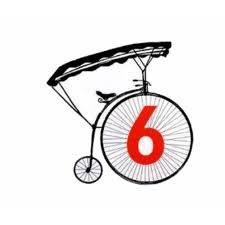 I would encourage those craving numberdom to be very careful. Numbers are nasty things, and can follow you around. Don't let yourself become a pawn in someone else's political game. I have little fondness for Romney, admittedly less for the President. There are other candidates, other parties...I, too must be careful with whom I  am numbered.

The "other driven" have no need for names or individuality. A number is all that is needed.

No matter how many zeros stand shoulder to shoulder, the sum total is still zero.