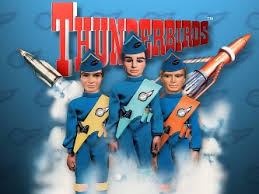 Jay, upon meeting me daughter at MatsuriCon in Columbus, he delivered into her care a couple of DVDs, one of which was the fans' choice "Best of Thunderbirds". I had a lot of printing to do today, and wanted something that I did not have to hang on every frame to follow the story, so I plugged it in! After I put the fire out after shorting out the plug - I really had to cram the disc in to fit it in the little holes - I put it in the DVD player.

The first episode was "Trapped in the Sky", the premiere show of the series, and easily the best one. The atomic-powered airliner Fireflash is sabotaged by the nefarious Hood, in a bid to attract International Rescue so as to photograph details of the control panels and conduits in order to become the wealthiest man in the world.

Wikipedia's writeup far outshines my own:

The Fireflash on its maiden voyage from London to Tokyo is sabotaged by The Hood and is unable to land.

I have to say that it is terribly fun, but it suffers from a small problem. It was supposed to be shorter. The first nine episodes were filmed and in the can when their financier Sir Lew Grade was so overwhelmed by what he saw that he insisted that they be hour-long programmes. The nine had to be re-edited, new film shot, the whole schmear, all while NEW episodes were being prepared. It got done, and it worked, but some of the episodes have a stretched feel.

Two things: Alan Tracy is a dreadful little git! Ungrateful, whiny, brattish. These are his good points.
When Bob Meddings manages to get aboard the Fireflash to defuse the Auto-Bomb Detonator Unit placed by the Hood (no, really...it is one of those little engraved nameplate things. I guess the Hood picked it up from that kiosk at the mall), 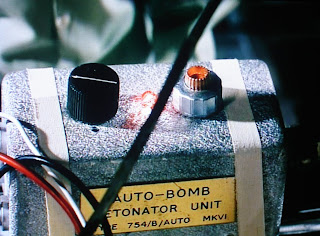 I'm not REALLY That Guy. I dearly love all the Supermarionation series. I have just seen them all too many times. I can see little details and plot craters too easily. I remember the first time I watched "Fireball XL5" and noticed the shadow of the exhaust plume on the sky backdrop. It was charmingly jarring.

Thanks, Jay. It's great fun!  And it ain't Ponies.

@Aardvark --- " When Bob Meddings manages to get aboard the Fireflash to defuse the Auto-Bomb Detonator Unit placed by the Hood (no, really...it is one of those little engraved nameplate things. I guess the Hood picked it up from that kiosk at the mall)".

Don't you just love the habit of the Anderson shows to label absolutely EVERYTHING? I always smile whenever Thunderbird-1 is launched from a large chamber prominently marked THUNDERBIRD 1 LAUNCH BAY. As if someone really needed to know that. Imagine, for example, if I put up a sign in my living room reading WOLFF LIVING ROOM. You don't think I'd get peculiar looks?

Jeremiah gets enormous amusement out of the fact that, whenever the Hood makes a call, he's not only wearing a disguise but he's also switched off the video pickup on the phone. Now THAT'S insecurity for you.

You can always watch "Journey to the Far Side of the Sun" again and wash the puppets out of your head.

@Michael--That seemed to be a thing at that time (remember "Batman"?). Of course, it would be a pain for Thunderbird-1 to take a left in the tunnel and wind up in Grandma's Atomic Oven.

Nowadays, Homeland Security would be able to switch on the video feed unbeknownst to the caller. Hmmm...I actually find the Hood to be a more creditable mastermind than bin Ladin crouching in an Afghani cave.
------------------
@David-- You are so right. And I can always expect cogent, pithy commentary from you.

@Vidad --- LOVE "Journey to the Far Side of the Sun", and have always patted myself on the back for picking up a DVD copy of it when I spotted one (not being aware at the time of how rare they were).

@Aardvark --- So right about "Batman". I mean, seeing as how it was only Batman and Robin in the Batcave, wouldn't they naturally know what everything was?

(They even marked which Batpole each of them slid down.)

If I stuck little signs everywhere in my room (e.g. WOLFFCOMPUTER, WOLFFBED, WOLFFSHELF) then Denise and Jeremiah would be rightfully checking me to see if I were feeling well.

Anderson's UFO series also had those quirks. That SHADO logo was e*v*e*r*y*w*h*e*r*e in that hq (what? People didn't know where they were?). And, for a supposedly secret organization, they certainly labled everything (SHADAIR, Skydiver, Mobiles, etc.).

@David & Michael - Got "Jouney" a few years back. One problem though. How do you turn off the subtitles?

@Aardvark - Have any sardines while watching T-Birds?

@Jay --- Wow. My copy is the Image Entertainment Widescreen Universal DVD release, and it doesn't even have a menu to add captions, let alone take them away.

Is it your TV or maybe your player that's somehow set for captions?