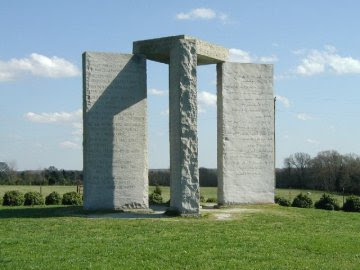 I have had a fondness for tinfoil hat stuff since I was a kid. UFO magazines, history, movies. I read 1984  and Brave New World  when I was 12 or 13. Dystopias 'R' Us. Ira Levin's This Perfect Day  was a favorite of mine. I came into the faith on the Late Great Planet Earth wave of end-timey-wimey silliness, waiting for the Forces of the Antichrist to come behead the faithful. Then AM Christian radio brought me Marlin Maddoux and "Point of View". From government anti-Christian social engineering to the LaLonde Brothers telling us who the Antichrist was THIS month, it was immensely entertaining. Then I studied and was taught my way out of dispensational follies (in short, letting the Bible say what it says, without interpreting it by the New York Times headlines), and that show began to pall. When I discovered Art Bell's Coast to Coast AM on latenight AM, I was ecstatic. A new conspiracy fix! UFOs, transhumanism, Area 51, government goons taking out inventors who would cut into Big Oil's profits, Tesla, Greys, Reptilians, subterranean complexes, all great fun. Then, "X-Files", "Millennium", "Dark Skies", all increased my regular fix. (The fact that I was having wacky brain chemistry at the time made it all the more delicious in that I had a bit of a problem being certain that the stories were entirely fictional.)

I will leave you to look into F. Tupper Saussy.

Now, full disclosure, I collect conspiracies. I am not so open-minded that my brain falls out. I am merely entertained by them, though I find that harboring the suspicion that all is NOT as advertised keeps me on my toes. Any more, I think that the Alex Jones end of the spectrum may in fact better reflect what is going on. GMO madness, chem trails, a government actively seeking increased control over the people, like that. Look at today...we have a President fundamentally transforming America by taking vacations!

But all is not aspartame sweetness and CFL light in Conspiracyburg. Alex Jones is under attack by anti-Zionist conspiracy types for his blaming Luciferian Globalists instead of Jewish bankstas and such. Oh, and for being ungrateful. Apparently, despite Ben Bernanke's best efforts, there is a finite amount of fiat money with which to purchase conspiracy books and DVDs, so the contest is on to be the True Conspiracy Source. Thank God for the internet, where I can wallow in conspiratorial crapulence to my heart's content! I don't have to buy their books!

I collect conspiracy theories like grandmothers collected thimbles. Whether they are of value depends upon history's verdict.

I have my suspicions....

Absolutely delicious. While I was laughing at you, "them" (those on our side and those not on our side), and me, I was just thinking... Perhaps you might be an disinformation officer! :p

Never mind, we have storied similarities. And that is good, I think.

Happy New Year to you as well.

Excellent!
I do not subscribe to any of it, though nuggets of truth may be unearthed in about all, if you can fish them out of the avalanche of utter nonsense rolling by.
My take remains that "large groups of idiots led by cunning liars in the same general direction can sometimes take on the appearance of a conspiracy, but that doesn't actually mean one exists." The chief deterrent of my unquestioning acceptance of "The Plot" is the exposers thereof spend equal time talking about UFOs, life after death/reincarnation, TM, out-of-body experiences, psychic/ESP BS.
This makes them look like a bunch of dumbasses - much moreso than the conspiracies!

I used to be a BIG stone serious Kennedy assassination conspiracy fiend. That was back in the old days, when there were only a handful of really juicy and (comparatively) rational conspiracies worth discussing. Unfortunately, since then, Conspiracy Theories have become a lost art. To my way of thinking, anyways. Too many black helicopters. Too many squiggly pictures. Too many people taking themselves way the heck too seriously. All of a sudden I found myself in love with the world, so there was only one thing I could do: ding a ding dang my dang along ling long!

(Points for whoever picks up that song cue.)

But all the fun's been taken out of conspiracy theories. What was once sheer mental exercise has since degenerated into a total lifestyle for way too many.

Michael, did Jesus, in fact, build your hot rod?

(The Dread Dormomoo sussed it out.)