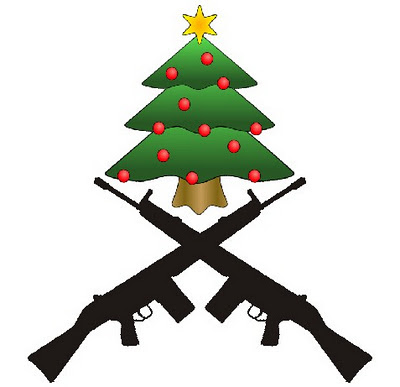 This was the situation in Athens, TX. Yes, Texas. A Nativity scene in Texas offended atheists in Wisconsin. This shows that Mike Judge is a Prophet True. Chic militant atheism represents the most annoying segment of the population. I saw the Eric Bolling interview with the Quark-like spokes-atheist, who whinged about how insulting Jesus is, and how exclusionary Christmas celebrations are.

Well, I feel excluded, too. I NEVER get invited to Kwanzaa parties. Ben Bernanke NEVER invites me to Hanukkah celebrations. Blast it, when can I experience Eid?!? I feel so left out!

OH! It's because I am a member of My Club, and they are members of Their Clubs. If you choose a group to be with, you are de facto excluding those not-with. If my group says that a different group is stoo-pid for being that group, it is unlikely that I will receive an invite to their annual dinner.

I dealt with this ages ago, and I think that it serves again:

This Aardvark is uncertain. I do not know which is the greater annoyance: the anti-Christmas lobby with their incessant whining about their minority rights, or the Chick tract-ors who cry pagan-this, and heathen-that, and demonic-the other regarding things Yuletide.

As to the anti-Christmas Lobbyists: Become 51% of the population, then we'll talk.
Besides, you don't HAVE to go to the C-word Parade, or to any of the parties, and you SURELY don't have to accept any C*******s presents.
Have your own grey parade. Have parties. Don't forget the Cold Oatmeal Dip. MMMMMM!
Grey gooey goodness!

"Christian" freakazoids: I don't see Paul, et al, worrying that demons are gonna jump into Christians because they walk past a pagan temple. Besides, Believers aren't worshiping Saturn or whomever. They are honoring Jesus. Say it. JEEEEE-sus. Not Saturn.
Paul DID write *ahem* NOT to judge another because of a feast day.
Besides, you folks with steeples on your church buildings, the case *can* be made that you are honoring The Erect Penis. I won't EVEN get into obelisks.

EVERYONE: Stop whining, and have a merry Christmas, a cunning Kwanzaa, a hot Hannukah, a stunning Saturnalia, a cool Yule, it really doesn't matter, 'cos y'know what?
Jesus is STILL Lord.

Oh, the Big Red Button? Just a little shirt idea we are producing.
A big red button on the shirt front.

When I was growing up in Austin, the headquarters of the American Atheists was right across the street from one of the major Baptist churches in the city. Go figure.

It's all about Empowerment and gaining ground in the social pecking order. Someone or a group wants to be able to exert influence over others, so they lean as hard as possible and, if they're successful, the other side is obliged (or forced) to yield some sort of ground or position. Unfortunately, our society is less interested in Justice than it is in applying grease to silence a squeaky wheel, so some monumentally stupid decisions have been made.

I happen to be offended by the actions of quite a number of people and/or groups. But I was brought up to be familiar with The Golden Rule (a little thing many people are apparently deucedly uncomfortable with). I tell myself that if a particular point of view offends me then, quite possibly, there are those who are offended by me. Fine. We both go our own way. But if these people suddenly start to try and exert power or influence over me, then I feel obliged to go into some sort of action. I only want for everyone to be able to live their lives freely and in peace. Apparently, though, there are people who aren't happy unless they're somehow bossing things around, even on a local level.

Merry Rama-hannu-kwaanz-mas...
(Did I miss anyone?)
Seriously, my sentiments exactly: I don't argue and fight over holidays, it's more fun to ENJOY them!