Dying to Self and other heresies 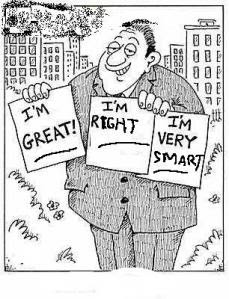 Over at Vox's , one of the commentors modestly said:

And forgive my un-Christian ego attitude here, but I know I can and do do better than they in regards to educating my children.


this said regarding a post about homeschooling vs. government school excellence.

One of the other commentors then asked:

How is that "un-Christian"??


An important question. How is acknowledging what one is good at (and which is commanded by God for parents: train up a child in the way he should go..." - Prov. 22:6) possibly be un-Christian? The mistaken assumption here is that this smacks of pride, the "goeth before destruction" type. Modern evangelicalism seems to have learned more from Buddhism than the New Testament. Jesus rightly claimed that He was Who He was. "I am the way, the truth, the life; no-one comes to the Father except through Me." Paul "bragged" about his pedigree as a Pharisee:

1 Finally, my brethren, rejoice in the Lord. For me to write the same things to you is not tedious, but for you it is safe.
2 Beware of dogs, beware of evil workers, beware of the mutilation! 3 For we are the circumcision, who worship God in the Spirit,[a] rejoice in Christ Jesus, and have no confidence in the flesh, 4 though I also might have confidence in the flesh. If anyone else thinks he may have confidence in the flesh, I more so: 5 circumcised the eighth day, of the stock of Israel, of the tribe of Benjamin, a Hebrew of the Hebrews; concerning the law, a Pharisee; 6 concerning zeal, persecuting the church; concerning the righteousness which is in the law, blameless.
7 But what things were gain to me, these I have counted loss for Christ. 8 Yet indeed I also count all things loss for the excellence of the knowledge of Christ Jesus my Lord, for whom I have suffered the loss of all things, and count them as rubbish, that I may gain Christ 9 and be found in Him, not having my own righteousness, which is from the law, but that which is through faith in Christ, the righteousness which is from God by faith; 10 that I may know Him and the power of His resurrection, and the fellowship of His sufferings, being conformed to His death, 11 if, by any means, I may attain to the resurrection from the dead. (Phil.3)


Paul and Jesus both acknowledged freely what they were, yet without pride.It is OK to own what you are, what you are good at, and what God has equipped you to do. I am not referring to "religion" here, but rather every part of life, for every area of our lives should reflect God's nature in us. Your work, your family, your fun. When people see you as a Christian father or mother, engineer or waitress, model rocketeer or Frisbee golfer, they should be able to see Jesus' character reflected in it all.

Paul knew that he was The Stuff as far as his career in Judaism was concerned, but he counted it all as rubbish (literally, dung) compared to Christ, and the righteousness found by faith in Him.

You can fully acknowledge your own "good ats" without pride, as long as you acknowledge Jesus as being boss of all of them.

I have always thought it a reductio ad absurdum exaggeration to say that dispensationalists believe God's Kingdom is a future thing, to be revealed when Jesus returns, since he failed to persuaded the Jews of His Messianic credentials. Bet he couldn't have sold vacuum cleaners door-to-door either.
But no, I heard no lesser a personage than Mr. Bible Bus himself, J. Vernon McGee report this.
He does say in his notes on Matthew that

To read into this expression (the Kingdom of Heaven) the history
since John and Jesus made the first
announcement is a presumption which the Scriptures will not countenance. The
kingdom was near in the person of the King. The kingdom has not been postponed,
as God still intends to carry out His earthly purpose on schedule — “Yet
have I set my king upon my holy hill of Zion” (Psalm 2:6). God’s dealing with
men since the rejection and crucifixion of the King has been in the framework
of the kingdom of heaven. He is carrying out a heavenly purpose today “bringing
many sons unto glory” (Hebrews 2:10).


But I think that this is doubletalk. John taught that the Kingdom of Heaven "is at hand" - close enough to reach out and touch. Then comes Jesus, teaching of the Kingdom. Hey, Presto!

The dispy idea that the church is a sort of half-time change of tactic when it was evident that the Jews weren't buying it is abhorrent, and again, I never really believed that anyone really believed it.
I think that the biggest obstacle to understanding these things is not perceiving the relationship between time and eternity. God is eternal, and knows "the end from the beginning". He stands outside of time, and sees it all. Think of time as God's snowglobe. He can see every angle, count every particle of snow, plot the position and trajectory of each. Time is separate from God, a pocket in eternity. The Kingdom exists eternally, just as Jesus, who died on the cross in ~30AD, can be said to have been crucified before the foundation of the world. In the eternal view, all time IS. God, in space/time, declared Himself to be the I AM. As I live my life in time, God sees the end from the beginning. Even if we still see the rebelliousness of sin in time, all is accomplished in eternity.

The flavor that I get from the dispensational shoehorning of Scripture is that since the Jews blew it in accepting Jesus as Messiah, God established the church as a sort of placeholder for the Gentiles until the Jews come around and accept Him the second time around. Of course, with all of the Hell the Jews have gone through (and even put themselves through), and especially the Antichrist / Tribulation firestorm, it seems as though the dispys have not considered certain PR problems, because for all the world it seems as though the plan is to forcibly rape the Jewish nation into submission. (The antichrist in the End-Timey-Wimey scenario does not invite the Jews for tea and crumpets!)

This does not sit well with me, and totally ignores the whole of Old Testament prophetic warnings to Israel and Judah, as well as Jesus' clear warnings in Matthew 24, et al. The coming of Messiah was the fulfillment of God's promises from Adam to Abraham to Moses on. Isaiah is all about it! The warning Jesus makes is clear: I AM He. Receive Me or perish, for there is no Other. The Jews in main rejected Messiah, and all of God's promises came home to roost...not just the nice ones we put on Promise Cards. The Temple was destroyed, Jerusalem burnt, and the Jewish nation killed or scattered. God said "Abbadee, abbadee, that's all, folks!". The religion of Judaism was ended by the One Who established it, as it was all fulfilled in Jesus. Now it is up to individual Jews and Gentiles to make peace with Messiah Jesus. That Britain established the Mid East home of the Jews on the Palestine real estate was a cynically sentimental religious way to get the Jews out of everyone's hair* .Worked swimmingly, that. Now, we all accept, reject, or ignore the Lordship of Jesus, and await the Last Trumpet announcing Judgment Day.

I understand that this was not a pleasant look at the teaching, but the truth is, if you take the Left Behinder teaching to its logical conclusion, that's what you get. Israel defies YHWH, rejects Messiah, then gets a second chance after being prophetically raped into submission.

It's just that putting it plainly doesn't sell a lot of books. I'm not selling books. I just want to see this pernicious attack on the character of our Heavenly Father put to rest. Painfully. I want to see an end to looking for "The Antichrist" and instead have our focus be on Jesus Christ, as it should be. This less-than-200-year-old, Johnny-come-lately doctrine cobbled together as a "new way to understand the Scriptures" largely by Darby and Scofield has led a majority of American churches astray, and has removed the focus from "make disciples of the nations" and "do good to all, especially those of the household of faith" and replaced it with dispensational depression and "you don't polish brass on a sinking ship".

If you read the Bible without an agenda, you will arrive at the truth, allowing it to teach and change you. If you read it with an agenda, "you have your reward already", you get what you're looking for.
Exegesis vs. eisegesis.


*To be clear, I am presenting what appears to have been the global attitude, not MY attitude.

And a good lesson it is.

And there was something special beside a good lesson. It is funny, but just lately I have been trying to repurpose my outlook to be upon the crucified, and the risen Christ. The difficulty being three-fold. When to look upon the crucified Form, when to see my Risen Lord, and how to not lose focus on the horrors around me.

Thanks for the bootstraps to my newer notions. God speed. It is good to see a man seek the way of his Lord, and do it well.

Thank you, Doom. You bless me. I pray that your new focus suffuses your entire life, body, soul and spirit. Maranatha!