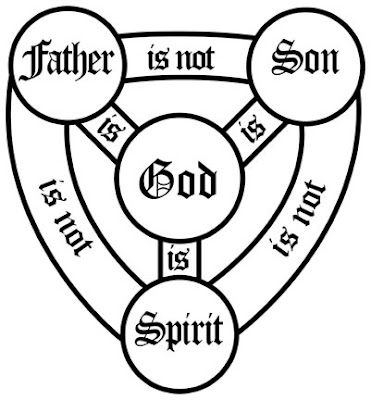 Last week-end, Vox had a theological post regarding (historic) fundamentalism, Trinitarianism, and other holy alphabet soups. I only participated with one comment out of 383. I am not...sophisticated enough for the ilk where theology is concerned. Those who know me may start at that thought, as I can hold my own in theological debates, but, no, I have a problem. I am eschewing doctrinal sophistication; I, who at one time held Calvin and Arminius in his 'varky noddle at the same time!

It is because I have noted that the farther the church got from the simplicity of the gospel message (and I am including Paul in that simplicity), the more involved, and complicated doctrine (teaching) became. One might say Byzantine. The attempts to dissect, parse, and even avoid inconvenient truths led the church leaders after the first century down tortured paths of logic and rationalisation until the church that grew to fill the ancient world ceased to resemble the template very much. From simple apostolic commands to "repent, be baptised (baptizo - immersed) in Jesus' name for the remission of sins, and you will receive the gift of the Holy Spirit, the formula morphed to include year-long catechumen classes before the person could even be baptised. A simple system of church leadership consisting of elders (men who met specific character attributes, who were overseers of the flock of the local church) and deacons (men who dealt with more mundane concerns of the church, benevolences and the like, who were also of specific character!) was stuccoed with a system of priests, bishops, archbishops and such. The churches, which were local and autonomous, became The Church, hierarchical and overarching. Theological entropy reigned, partially from trying to apprehend an Eastern Hebraic gospel message using Western Greek thinking, while fighting off encroachment by heretical teachings and philosophies. The historic creeds were developed as a circling of theological wagons against predation by gnostics and other weirdos. The local churches maintained their collections of gospels and epistles until the valued ones were assembled into the New Testament. (The Nicaean Council did not invent the NT, they pulled together what was accepted by the churches.)   The Church appears to have been playing a defensive game by this time, and you tend not to win with defense. You take no new ground on defense. Along came Constantine, wedding the Church and State, and the damage was almost irreparable. The great theologians wedded Greek Philosophy and the Bible into a chimaeric monstrosity, little resembling the "as a child" nature of Jesus' teaching.

East split from West, Protestant from Catholic, Presbyterian from Lutheran, Pentecostal from Baptist.
Behold how good and how pleasant it is when brethren dwell in unity! Reformers and restorers came and went, all with a similar theme: return to the simplicity of the New Testament teachings. This worked for a generation or so (like Israel's history), a doctrinal Occam's Razor snicker-snacked through the baroque crenelations  of man's theologies, paring them back to more primitive, basic dimensions. Then the gingerbread began to overtake the refreshed church's facade, and what was a small, inviting, homely dwelling of God's people became again a Barnumesque parade of innovation and thrill-packed canonical acts, with credal clown cars, and theological trapeze acts.

I am not a sacerdotal sophisticate, because I have come to see the divisions in the church not as a good thing, not as spiritual smorgasbord where one can glut on his favorite bits (no brussels sprouts, thank you!) and leave the rest, but as a stiff, quivering digitus sinistrus in the face of God. The unity which we are commanded to walk is ignored in light of tony something-for-everyone-ism.

Paul wrote to strive (to fight, ain't that a giggle?) for the unity of the Spirit in the bond of peace. You fight the things that divide, and be at peace with one another. He lists the seven unities around which we should meet:

There is one body and one Spirit, just as you were called to one hope when you were called;  one Lord, one faith, one baptism;  one God and Father of all, who is over all and through all and in all.
Ephesians 4:4-6

This is simple. Jesus' teachings are simple. The epistles are largely ways to apply the gospel to life.
We have made this wa-a-a-a-y more complex than it needs to be. If we read the Word with no agenda, we stand a greater chance of apprehending the truth than if we go at it with preset conditions and assumptions. Exegesis vs. eisegesis.

Trinity? God's word refers to the Godhead. We can better rally around the Spirit's speech than our own. May not be as urbane as playing doctrinal Scrabble, but it is simple, perhaps easier to understand. Peter (whose Greek was so odd that translators called it "Baboo Greek") said to "speak as the oracles of God", that is, speak what God says. The church might take a memo.

Lutheran Confirmation class! Lessons about Nineveh and all the four-square you could play. Loved it!

We currently live in a litigation-heavy environment because our laws . . . which should be spelled out as basic and as simply as possible (what part of NO don't you understand?) . . . are rendered more and more complex by a self-perpetuating professional bureaucracy of lawyers. Justice cannot be achieved without the assist (and blessing) of an attorney.

So it is with the Church. There should be a direct and wholly understandable path to Salvation. Unfortunately, this approach leaves little for the professional clergy to do except polish the pews and maintain the supply of communion wine. No room for megachurces, multi-media evangelists or Holy Gospel modified to serve the partisan view du jour. Obviously something had to be done. Entry into Heaven, after all, was much too important to be left to the masses.

(And that's Mister Cynical to you!)

As the decades have crawled past it has become more and more my practice to seek spiritual guidance through bypassing the doctrines and views of the temporal church and going straight to the source. Not wanting to totally flush the Church away, but "Come unto Me" seems to be a wonderfully workable solution to a good many thorny problems. Simple . . . easy to follow . . . and it ain't broke, so there's no need to fix it.

Part of the reason for the long lessons is to make sure those who join the Church really understand what they are joining, and have time to change there minds. Or, that is my guess. Once branded as a self-acknowledged Christian, counted among the sheep, betrayal of that covenant is worse than having never been counted. Ignorance is no longer even a possible excuse. I myself wanted and needed the lessons, to be more sure before joining.

As for the creation of first bishops, then arch bishops, and cardinals, that is due to size. With a billion congregants, it would be nearly impossible to have any order at all without a structure. As with the military, if you only had 320 men, a captain in the Navy would be all you need. But when you have a quarter of a million men, even an admiral is not enough. Is there any doubt who the first Pope was, whether you call him 'Papa' or not? And he was given the keys. Do you believe those keys were passed on, or lost through sin? Who in your church has those keys, and how did they get them? It can be complex in spite of simplicity for those who can't know.

However, as for simplicity in worship? At first I didn't see it. And it can be difficult to see. I have an engineers mind, so I look for the complex. I seek the difficult. I want to know, need to know, how, why, where. But it is there. As with the giving of time, talent, and treasure, none is asked to give more than they can. There is a simplicity in there. Now that I have found and seen it, I cherish it the more. I see many in Church who can only understand and worship simply. To them, Church is much like home, in the literal sense. At least they are quite at home, and welcome to be, in Church. My eyes see both the depth, and now to a degree the simple. I see it was my failing, not the Church's, in finding humble simple worship.

As for the lawyering up by men of God, and there is some argument that their choices grow slim on that regard, I have no doubt about what that is doing. Further, those lawyers are advocating what is abominable. Those lawyers, and law makers, are trying to force homosexuality, female ministry, and other such unChristian things into the ministry. They have done so quite effectively in many churches, and continue. So far my Church has held firm, mostly.

I have heard it said that as the tower of Babel was meant to reach the heavens so as to fight or face God, so are laws and lawyers another way to try and raise the stench of human sin right to God. We know how that first story goes. Have no doubt, God will not abide the latter tale's existence either. It will crumble. Those churches, like the early break-aways, will fail.

Uhrm, I hope we didn't ding your rant. Sometimes I just need to rant and I hate it when some one... you know, sort of shoots it down (or tries, even without malintent). :p

Aardvark's a game ANYONE can play!

A lot of people go the "Me and Jesus" Lone Ranger Christian route (been there) for many reasons. Being hurt by the uber-nasty religious Pharisites (HA! I just made that up!), or just 'cos they're ornery. Paul makes it clear in Ephesians that Jesus died for the church. We are members of the church, wot are in Christ, and our individual discipleship is important, but the church, the body of Christ, is the instrumentality through which Jesus works today. Many seem to miss that. The Scriptures provide a simple template that anyone can follow, with congregations budding off (sending apostles and evangelists) to start and establish new congregations, setting up elders at the right time (that was Timothy's job), and then going back home.

I gotta go to sleep, now.