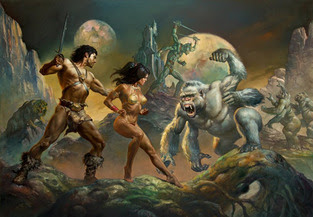 I am somewhat jaundiced as to another Disney rebirth, though this time, one for the lads..While not animation, it displays a typical degree of suitthink..."John Carter of Mars", E.R.Burroughs' beloved book (and series) about a man astrally drawn to Mars, and thence to heroism.

So, they are titling the movie "John Carter".

Not even "John Carter of Flushing" nor even Croyden. His name is so musky with masculinity that it will draw the boys in on its own strength. 'Course, Dejah Thoris helps.

It'll probably be a politically correct, CGI ridden piece of garbage. Even if it isn't I gotz me a feelin' Disney/Hollywood is going to mess it up somehow.

It's a Disney/Pixar effort. The trailer LOOKS nice....

I wish I could say I'm happy about the upcoming John Carter movie. It's something I've been wanting to happen for decades. Unfortunately, nothing I've seen in the trailers leads me to believe this is going to do justice to the original stories.

I harbor few illusions, meself. However, I grew up in SC, whose state motto is "Dum Spiro Spero".