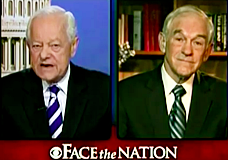 Bob Schieffer Attempted to pillory Ron Paul with bumper stickers on Face the Nation this Sunday
(the link is to the transcript). Of course it is foolish to listen to the reasons an enemy gives for attacking you. Of course to do so is to say "It's all America's fault". Schieffer has ceased to be a newsman, and has devolved into a mere Establishment shill. Oh, wait. He's on CBS.

Paul is correct. Our foreign policy has consequences, some profoundly negative ones. Vox Day deals with the issue with grace and dispatch. We HAVE to be clear on this. The rest of the world is not happy with the presence of the US Armed Forces Police and Pizza Delivery Service. Our budget does not like it either. Oh, wait. "Budget". We cannot afford continued foreign intervention, and President "Never Met Spending He Didn't Like" O'bama cannot get that between his jug ears.

REPRESENTATIVE RON PAUL (Republican Presidential Candidate/R-Texas): Oh, I-- I-- I think there's an influence. And that's exactly what, you know, the 9/11 Commission said. That's what the DOD has said. And that's also what the CIA has said and that's what a lot of researchers have said. And just remember immediately after 9/11 we removed the base from Saudi Arabia. So there is a connection. That doesn't do the whole full explanation. But our policies definitely had an influence. And you talk to the people who committed it and those individuals who would like to do us harm, they say, yes, we don't like American bombs to be falling on our country. And we don't like the intervention that we do in their nations. So to deny this I think is very dangerous. But to argue the case that they want to do us harm because we're free and prosperous I think is a very, very dangerous notion because it's not true.

BOB SCHIEFFER: Well, I-- I would-- I would question the import of what some of those commissions found that-- that you've cited there. But basically what you're saying, Mister Paul, is that it was America's fault that 9/11 happened and it was our fault that it happened?


Well, there it is. The crux of the whole matter, making Paul's statements broader than they are. Saying that our policies contributed to a problem is patently not saying that it is ALL OUR FAULT.
I love Schieffer's judgment of the commissions. On what basis, by what authority does he render these judgments?

REPRESENTATIVE RON PAUL: No. I-- I think that's-- I think that's a misco-- misconstruing of what I'm saying because America is you and I. And we didn't cause it. The average American didn't cause it. But if you have a flawed policy, it may influence it. When Ronald Reagan went in to Lebanon, he was deeply-- he deeply regretted this because he said if he'd been more neutral those Marines wouldn't have died in Lebanon because the policy was flawed. The same thing that McNamara said after the Vietnam War. He wrote in his memoirs that, you know, if-- if he would have changed-- if it-- if we don't learn from our policies, it won't be worth anything. So I'm saying policies have an effect. But that's a far cry from blaming America.


When I was driving home from YuleCon yesterday, I had to cease listening to Glenn Beck's prattlings about Congressman Paul. Beck and his Merrie Yes-Men were displaying an almost America-love-it-or-leave-it attitude.Clearly we could have done no wrong, could have no culpability at all. Roger Hedgecock and other reliable neo-con (and no, that is not code for "Jew") talkers are all taking the same line, which ultimately is at odds with the Founders. Few of our overseas adventures have been according to Hoyle, much less according to Washington or Jefferson.

Ron Paul is on firm ground in attempting to drag us back to more Constitution-sized government. Please support him, if you have any interest in a more righteous, more Constitutional government.
A more free nation. Don't cherry-pick a single issue; look at his whole platform.

If it means "destroying their villages in order to save them" (From themselves, poor dears.) then so be it. "Instrumentality" must be implemented for the greater good.

Ron Paul is a starry eyed idealist/madman. Thank goodness Newt Gingrich is here to save us.

Ron Paul will have to disembowel the entire Warfare Schtaat & Synagogue of Sata...I mean "Banking & Finance Industry...Yeah, that's it ...to solve the problem. The cancer may be too far along to amputate, is my concern.

Heroic efforts may well have a positive effect. We should not gainsay efforts to do right. If there is only one candidate that stands for even a somewhat more Constitutional government, I must stand with him.
----------------------
Jay: Yes. You're right. Praze Bob, Newt IS the answer. Instrumentality will out!