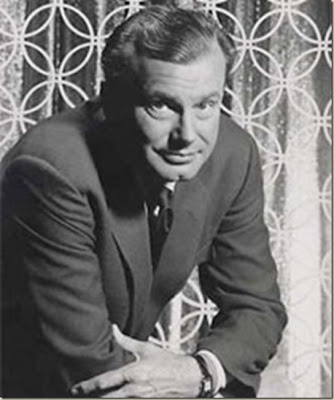 Your Aardvark has not abandoned you. He has been busy in the non-E-world. When having downtime, he reads. The current book is My Saber is Bent by Jack Paar. Yes, that Jack Paar; the one what got the whole late-night TV talk show rolling. Real talk, with intelligent people saying interesting things to one another: authors, playwrights, politicos like Kennedy & Nixon, raconteurs, up-and-coming comics who, having to follow Broadcast Standards and Practices, had to work at their craft, rather than playing to the sniggering twelve-year-old cultural mind that has been so ably trained since by Johnny Carson and his chat progeny.

The copyright of the book is 1961, the era of FCC head Newton Minow referring to television as a  "vast wasteland". Plus ça change.... The difference in TV from the mid-Fifties to the Sixties is Grand Canyonesque.
Serling's "Twilight Zone" gave way to "Land of the Giants". Paar's "The Tonight Show" gave way to Carson's.  The televised plays were replaced by yuk yuk sitcoms and Westerns churned out by the numbers on the Warner back lots. "Did you learn your lesson, Beav?". Morality plays replaced by the moralizing irreligious. Here is an example of Paar's thought:

The talents of Sid Caesar and Paddy  Chayefsky and Jackie Gleason have departed the home screens because the public didn't care.Apparently people would just as soon watch Hawaiian Eye and Lawrence Welk. The "Golden Age of Television" turned to dross when the fine original dramas of the mid 1950's gave way to the assembly-line, machine-tooled series ground out by the Hollywood film factories. Why should television lavish a vast amount of money on bringing Oedipus Rex or the Moiseyev Dancers to the public when it is just as happy watching something like The Price is Right or Candid Camera? The majority of viewers seem happy with TV as it is - and that's what keeps it the way it is.

Your Aardvark is not sanguine about the future of television. Sometimes cartoons seem to be the best produced and written programs out there. TV programming exists primarily as the gooey filling that keeps us watching commercials. Period. What precisely renders a show "good" merely because of its self-conscious references to other shows? That seems to be the sole raison for Ben10, f'rinstance.

I don't feel very good about the future of television either. If I'm not watching an old movie on TCM or YouTube (God love 'em), I'm searching for something like the HBO adaptation of "The #1 Ladies Detective Agency" (which didn't get picked up due to low ratings) or "Game Of Thrones" (which has been renewed). Finding good television used to watch used to be diffucult. Now it's become an art form.

And, with an entire generation (perhaps two) believing that "reality television" is the norm (rather than the exception), there doesn't seem to be any clue in sight.

My set isn't hooked to antenna, cable,etc. I only use it for my vid collection. TV is dead. So's the public.

I didn't experience a lot of Jack Parr when I was growing up but, thanks to archival footage seen here and there, as well as books, I've become familiar with his show, as well as those such as Oscar Levant's and The Today Show under Dave Garroway's watch.

Anyone besides me remember the G.E. College Bowl . . . when the idea was how much you knew (rather than how far you could carry a football)?

Allen Ludden was the host (married to Betty White.) GECB was a great program!

Oscar Levant. Wow. What a wit.

Jay, no wonder your tee vee is so weird. And watchable. I am at a con this weekend, and found the Japanese NHK World channel to be a treat!

Re: Beav and Wally: it always bugged me that Mom and Dad would send them to Sunday School, rather than the whole family going. Guess Ward and June needed some alone time. For highballs.
Everyone going would have been too "Davey and Goliath".

Anyone observing the history of the medium and comparing it with public education would be shocked by the parallels in decline: I do not watch TV unless there is a movie disc or football game to see, because it is less about entertainment and more about propaganda/dumbing down the plebescheithe. Ignorance, not thought is encouraged. Such a strategy destroyed two generations and is addling the brains of more.

Wow, do I remember Cronkite and the 21st Century!!! Great show (and interesting theme music; both the electronic opening and the rather nice orchestral closing piece).

(Also remember his earlier "The Twentieth Century". In fact, one of my earliest memories of television was the episode dealing with the X-15, as well as the one entitled "The Changing Face Of Japan".)

Wit was the defining characteristic of early television. Oftentimes, when I need amusement, I go to YouTube and watch excerpts from both "What's My Line" and "You Bet Your Life" . . . substance instead of form. All too soon, unfortunately, television advertisers were wringing their hands trying to figure out how to reach wider audiences (translate: more money). Somewhere they locked onto the notion that Wit and Intelligence didn't sell toothpaste as good as Kathy Lee and infantile (but highly suggestive) gossip. It's been going downhill ever since. The fact that certain contemporary productions achieve high ratings (e.g. Roots, Shogun, I Claudius, Game Of Thrones) is meaningless. What's important now is whether or not it generates lingering buzz of How Good Someone Looked At (insert name of vacuous LA social event) or whether or not (insert name of Person A) is sleeping with (insert name of Person B).

The contuing appeal to the lowest common denominator (