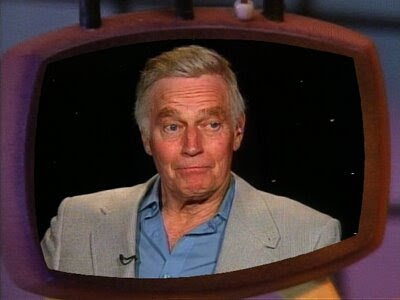 As much as I loved and respected Charlie, I have to point out the obvious. Namely, he was a TERRIBLE actor. That's not to say, though, that he wasn't fun and compelling to watch. Thing's like "Soylent Green is made out of people!" and "Damn dirty apes!" were constant running gags in my family during childhood. We'll miss you buddy! TRMOF

Wow. Let's praise Charlton Heston with faint damns. He was not a Method actor. He came from an older school. What is labeled "scenery-chewing" today was more familiar as "normal" to stage actors: exaggerated movement, emphatic elocution; all to get the point across to the rubes on the back rows. The Ten Commandments was definitely not kosher; The acting is hammy to our "sophisticated" 21st-Century sensibilities. However, it is a monumental old-school work. There was a TV mini-series starring Burt Lancaster, Moses the Lawgiver, done in 1974, which had none of the majesty of the DeMille movie, though it DID sport a score by Ennio Morricone. As overdone as Heston's Moses appears to jaded MTV eyes, it was done with a reverence, and an understanding of what would play in Peoria. I have said (from the pulpit, even) that if the plagues didn't happen like in The Ten Commandments , they should have. (Frankly, I think that Charlton Heston's Moses was perhaps the most sedate of the roles in the film. Remember Vincent Price's "Baka". or ANY of the women in the movie. I'm amazed there was a pillar or flat left at the studio!)

"Charlie"? How do you rate calling him Charlie? Space Ghost couldn't call him "Cheston"!
And one more thing: "Soylent Green is made out of people!"...why go with the wordy quote? Pithy, pithy. "SOYLENT GREEN IS PEOPLE." Now THAT'S pith.

I just remembered a small part I once saw Mr. Heston play.

It was in "Almost an Angel," which was a Paul Hogan takeoff on "Highway to Heaven." A bank robber is run over by a car when he pushes a child out of that car's way, and he has what appears to be a dream brought on by overhearing "Highway."

"God" tells him he's a slimebag, but that he's being given another chance because he saved the child.

Now THAT'S a little more like God, I daresay, than the other representations I've been seeing of late...

I must admit to a fondness for Morgan Freeman's portrayal of the Almighty.
The rest of the movies, not so much.

I liked Alanis Morisette as God.

But as for Charlton's acting... I thought it was great.

Yes, he was a great actor. As great as Alanis Morisette is not as a singer and/or songwriter.

Ummmmm...learn the definition of "irony", willya?

Alanis once commented that the irony of her song ironic was that it didn't contain irony.

I thought that was hilarious.

"Jagged Little Pill" is seriously one of the best albums ever.

He preferred Chuck. Not that I'd call him anything other than Mr. Heston, but Chuck was his preference.

I know. I was quoting the commenter at Vox's. "Mr. Heston" is the polite way to go.

Which raises an Issue, that of the public's assumed ownership of its movie stars. "Charlie...Marilyn...using intimate first-names to talk about them...like using the "tu" form in French. Bad form.

I was sure you knew Aardvark, I was referring to what the overly familiar commenter said. Some familiarity is to be expected, it's even appropriate; after all actors are trying to affect us, to touch our emotions. But there is a line where it strike me as rude. I think the "charlie" commenter was on the rude side and I'm glad you took him to task for it.