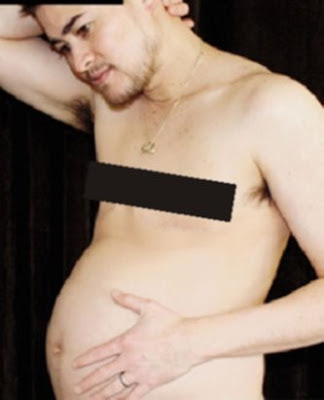 The Dread Dormomoo waxes wroth
THE PREGNANT MAN story is underwhelming. The proof of your sex is ultimately in your genes, not your jeans. This woman, "Thomas Beatie" unhappy with her birth sex-assignment, is having her plumbing converted. That's all. If a CSI swabs her mouth, even after she adds the dangly bits, guess what? "FEMALE!" her DNA will shout. So, the REAL story is: A woman is having a baby.

True, she is a self-loathing woman who has had her breasts cut off, and the nipples sewn back on the resulting plane, but, again, she is STILL A WOMAN!

Enter the Dread Dormomoo. She was watching the tube, and, lo, FOXspews had an article about this poor unfortunate's story.They showed a picture of her Manly Chest, nipples firmly attached.

FOX, in essence and fact, displayed frontal female nudity on daytime TV with no mosaic. The DD is no prude. She DOES have standards, however. Frankly, I think it unfair for FOX to allow Beatie to show her attributes (or current lack thereof) on telly, and NOT allow the same from Megyn Kelly or Harris Faulkner. Fair and balanced, people.

Seriously. The DD raises a valid point.The facts of the case are evident, and current Standards and Practices do not allow female nipples to be exposed (anything else goes, I guess. Just the little bullseye is verboten. David Gerrold in commenting on the Network Censors during the original Star Trek production said that you could show the upper breast almost to the nipple, but the under breast was forbidden. "I guess they were afraid moss grew there." said Gerrold.) Does this exposure signal the End of Western Civilization? Probably not, unless a bunch of offended Muslims choose to set fire to their shoes onboard planes, at least on the ones still flying. It does show that the newsies just don't think it through.

This is why they are called newsreaders in the UK.

Frontal female nudity on Fox. Can Page Three be far behind?

The real tragedy of this story is the baby. When born, the infant will not know the comfort and safety of nursing at Mother's breast. That tears The DD up most of all.
Posted by The Aardvark at 4/05/2008 09:25:00 AM

Very true. I think the androgynity (new word!) sector of our culture WANTS to call this woman a "pregnant man" so that they can pretend even more that women and men are interchangeable. Pregnancy has always been (and still is) the condition that is uniquely feminine--and now that it's popular again, after their efforts to eradicate or stigmatize it, they have to try to take it away from us some other way.

That sounds like another blog post for me. I'll have to do that--once E4God fixes my log-in problem, and I write about Billy Wolfe. (Which is a serious point of annoyance for me! I'll link the NYT article in my blog, and you can see for yourself why I'm so angry about it.)

Billy Wolfe. He should read Nietzsche. If he survives this, he can take anything. (I speak as One Bullied in grade school). Oh, wait. The Fayetteville schools have failed to educate him as their mandate demands. Kinda like they fail to protect him.

Think of it as evolution in action.

Public schools remind me of chickens in a barnyard, pecking the weaker cluckers to death.

Don't misunderstand my tone, here. I am livid over this lad's horrid mistreatment. To quote the apostle Paul, "I speak as a man (as the world)".

I AM curious as to what signals this kid is sending to attract such fell attention. (No, I am NOT saying it's his fault. I suspect some chemical / behavioral invisible "Kick Me" cue that is setting off these sons of Belial.)