The repentance, she BURNS! 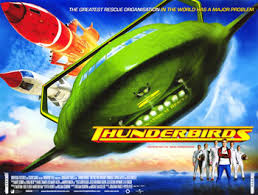 Since my original theater viewing of the 2004 Thunderbirds movie, I have maintained an emotional distance (except for a gut-twisting disdain) for the film. My review was : "It is a good summer kids action flick. It is not a good Thunderbirds movie." Jonathan Frakes' directorial efforts were tainted by his not having watched the original, and I resented him for it. The effects work was good, but I missed Derek Meddings. CGI, really? Jeff Tracy goes on the missions? Where's the secrecy thing? A billionaire ex-astronaut leading the charge? That's a plot hole you can drive a Sidewinder through!

Yet, this bit of summer fluff kept calling me back. (I even had my number changed!) Every year about this time, I have re-watched it, a palm-tree-filled homage to the coming summer. I had never 'til yesterday watched the DVD extras. There is a Frakes commentary track, so out of curiosity, I turned it on, and now I must repent in dust and ashes. You can hear the love that Frakes had for the movie, the general respect for the franchise, the ridiculous effort put in on the project. Babyface Riker won me over. And Sir Ben Kingsley. And Lady P. and Parker. Anthony Edwards as "Brains" Hackenbacker was more than tolerable, and the inclusion of his (SURPRISE!) son Fermat was something af a treat. Bill Paxton's over-the-top "Right Stuff" portrayal of rocket jockey Jeff Tracy kinda grates, but he's the paterfamilias in a coming-of-age actioner, so what're you gonna do? The other Tracy brothers, Manny, Moe, Jack, and Algernon, could have been portrayed as well by men's department mannequins, and are as interchangeable, and are as memorable as second week culls from an "Idol" program.

Kingsley took the role as a respite from the emotionally taxing parts he had been playing. He wished to play, and is as quirky a "Hood" as you could wish. His hench-persons Mullion and Transom are as cardboard cutout as you could wish. Sophia Miles is winning as Lady Penelope (and a dish!), and Ron Cook is frankly a sorcerous embodiment of the original Parker marionette and character.

I appreciate Hans Zimmer's score, in which he respectfully reprises Barry Gray's original theme (especially in the fun opening credits), as well as making the movie music "new".

I am hugely busy, and I must awa' to print shirts, but I felt the need to express my contrition. It ain't a bad flick. The vehicle design updates make some sense, but did Thunderbird 2 have to look like the bilious offspring of the Enterprise-D?

I rather found myself especially liking the upgraded Thunderbird-4.

(And I admit to having liked Rose Keegan as Transom.)

And, of course, Ben Kingsley makes any role he's in watchable.

But you're more generous with the film than I am. It certainly wasn't a good Thunderbirds movie, and I wouldn't even give it a pass as a good summer kids action flick.

The game-changer for me was Frakes himself. I cannot explain it better. His attitude changed mine...

...even if he did manage to work "Klingons" into the commentary.

"Thunderbirds" managed to burn me pretty much forever as far as Frakes is concerned. He didn't respect the material, and neither did Hewitt, Osborne and McCullers (the so-called writers).

By comparison, watch the first fifteen or thirty minutes of McLaglen's 1968 film "Hellfighters". That was closer to what "Thunderbirds" should've been.

Not my gig, fortunately or not. But the thing about contrition? While sin is a bane, more of the spiritual, the secular minor forms of it? I have learned to like these, for in minor corrections, and the conatural guilt? Thankfully it doesn't stop there, mostly. There is release... and in some cases a new-found pleasure.

I still don't like sin, but it is an excellent... training tool. And getting over it bears some fine fruits. Even in just the minor mundane forms. Cheers!

Gerry A wished to have none of it, so of course there were "Special Thanks to Sylvia Anderson" in the credits.

I am amused that the dreadful "puppet hand" Easter egg is apparently not findable online. I really wanted to use it!

Chewing gum for the brain, Michael. And of course Frakes didn't respect the material. He had never seen it.

Blast it, Michael! You and Kez are forcing me to go and read Doc Savage, as spectrophotonical as that would be. Or somesuch.

@Aardvark --- I've seen Kez's "Doc Savage" wall at his home. He has Doc Savage books and such the way some people have freckles.

(Myself I've only read a handful of the original stories. But I not only had Kez's knowledge to fall back on, I had a copy of Farmer's Doc Savage biography.)

I'd recommend FORTRESS OF SOLITUDE, SPOOK LEGION, METEOR MENACE, THE MYSTIC MULLAH and, of course, THE MAN OF BRONZE.