And To Think That it Happened On Liddell Lane. 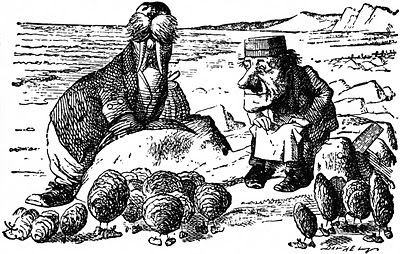 ...And it happened so innocently, too.

I was emailing a customer, and in my winsome 'Varky way, I wished to include lines from "The Walrus and the Carpenter:

It does seem that no contemporary "historian" can lay claim to the title unless he takes a revered figure from the ages and somehow dumps dirt on him.

Yeah, I'm pretty much aware that JFK was a womanizer. One of my favorite horror writers, H.P. Lovecraft, was a racist piece of shit. Another favorite author, Hunter S. Thompson, was someone I wouldn't want to have lived next door to. Und so weiter . . .

And when the lockpicks of history find some reason to pry open my life, I imagine there'll be some fallen faces as well.

"When the legend becomes fact, print the legend." ---The Man Who Shot Liberty Valance---

Going back to Lewis Carroll, I'm reminded of a story (appropriately enough). Queen Victoria had heard of "Alice's Adventures In Wonderland" and asked Carroll to kindly supply her with a copy of "his little book". Dodgson, tickled pink, sent her a copy of "A Syllabus of Plane Algebraic Geometry".

(I wonder how far Her Majesty got into the book before she commented that the plot was a little thin?)

"And when the lockpicks of history find some reason to pry open my life, I imagine there'll be some fallen faces as well."

Strike Witches? (I keed, I KEED!)
I have wanted to see it, as I am a sucker for alternate WW2 stories.
Yeah...THAT'S the ticket!

Haven't read "Lammas Night" yet but ought to (Denise has been the big Kurtz fan in the house so far, having read the Deryni series up one end and down the other). There's also a slew of alternate WWII history that Harry Turtledove has written that I need to get into.

I am a pushover for a rollicking good alternate history.

Academia is a circus of the absurd these days. If it was ever different, actually. Their whole job, the theoretical parts of it, are to prove the fantastic, if untrue, unprovable. As soon as they "banned" God from the conversation, all that was left was half-truths. And they do stretch "half-truth".

I think of the modern campus as an adult day care center for the criminally stupid. With so much government largess going in to support it and zero quality checks, you get what you get. End government funding of schools and loan programs and let the chips fall where they may. Even end R&D funding. Let their worth be based on economic reasoning, again, or... more.

I read Harrison's "A Transatlantic Tunnel Hurrah" when it was first serialized in Analog (all those years back when I was a regular reader). Nice bit of proto steampunk there.

Have you read any of the "Ring Of Fire" material created and moderated by Eric Flint? Absolutely brilliant (and it's taught me more about 17th Century Europe than I ever knew before).