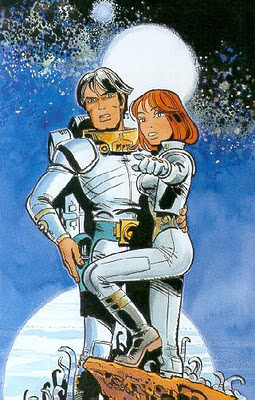 Anime is taken from the French, who love their comics and cartoons. They also love Jerry Lewis, but that is wa-a-a-a-a-ay beyond my ken, and thus will likely never be dealt with here.

It is a Vox Day-level conundrum. Have at it, Mensa-boy.

Yup. The Japanese, who love Frenchy-French-Frenchness (Give Fantastic Plastic Machine a listen), ganked the word "anime" for their own brand of big-eyes, small-mouth cartoonery,  and thereby hangs the tale.


We, just this month, made cable TV to go away, wishing it into Charter's corporate cornfield. We still have cable internet, though, and a ROKU box, a hockey-puck-sized bringer of joy. Through it you can access all manner of 'Net-TV wonders: Netflix, GBTV, all sorts of newsfeeds. And Crunchyroll.


I have been a fan of French comics for years. Asterix, Carmen Cru (Please note: no "z". This was from the '80s "French Ice" book), and Valerian - Spatio-Temporal Agent. Well.

The Franco-Japonais partnership has brought forth a treat: "Time Jam - Valerian and Laureline", a very creditable adaptation of the Dargaud  "Valerian" comic series. Crunchyroll has it. You can get it on your household Logic, or online via ROKU, your PS3, or other such technical gimcrackery.

Perhaps you can explain to me why Japanese manga/anime has made such headway in this country, and yet I find blessed all in the way of its French counterparts. Other than a few Hugo Pratt graphic novels, my French comic collection pretty much amounts to bupkus.

And I've heard of "Valerian", but wasn't aware it was still an ongoing series.

I never caught on with anime. Never understood the appeal? Yeah. Oh, hell, I know I'm a philistine, not just regarding "art", per se. I sort of dropped comics, the regular ol' American style, because I realize how politically correct it was. The truth does hurt, and comics should hurt, as they are supposed to be exaggerated reality.

Just woke up, grumping. Although, I am glad you haven't lost your enthusiasm. I need that on more things. Well, gaming I guess. I still have that.

Considering what DC's been recently doing with their comics, we may end up dropping American titles here as well. I just can't take it anymore.

Anime has always grabbed me not only because of the dynamism of the artwork, but because the Japanese haven't been chicken about characterizations and plots (shojo notwithstanding). Now, having Christian Volckman's brilliant 2006 film Renaissance in my DVD collection, I know that France (and a few other countries where they have a different word for everything) have been producing work of similar quality (and that Valerian trailer underlines the point), so it's just a matter of somehow bridging the water (literally). Pixar and other American animators are still being hagridden by the notion that cartoons are simply for children (or basement dwelling hipsters), and refuse to push the envelope to the limit. WB was doing so well with shows like Batman: The Animated Series, plus Justice League, and they've since watered down the crop. I can't really look at any contemporary cartoon shows anymore.

(Thank God I've still got my Fireball XL5 and Jonny Quest DVDs to fall back on.)


No there isn't.
http://tinyurl.com/6sajxoy
--------------------------
The '80s comics bubble opened the door for many Dargaud titles like Valerian and Asterix, in shiny-shiny bindings that fell apart at the second reading. The "French Ice" title was a hoot in the late '80s, Deni Loubert's excellent 5-year effort. I met Loubert and Moebius at Atlanta Fantasy Fair in the late '80s. Great experience, and I got a hilarious comic out of it, which I have to this day.

If you haven't yet enloyed the pickle-sour flavor of John Kricfalusi's criticism of (most) American animation, I encourage you to check him out, though there is a danger in being sucked into a weird art-discipleship-cult-of-personality thing.

Uh, Doom, because the chicks are HAWT? And it ain't Hanna-Barbera.

And the chicks are HAWT.

"The truth does hurt, and comics should hurt, as they are supposed to be exaggerated reality."

That is a scintillating truth.

Oh! Haha! The last comic girl I liked was Blondie. I see my problem clearly though. I never could quite get into cartoon chicks. But, fair enough. Enjoy.

I will have you know, I have some cheesecake calendars though. One, aptly named "Cheesecake", the other of Betty Page being rather fresh. Not cartoons, but not quite pictures either... So, I'm not a complete has-been (or never-was).

I was going to say if you think girls with big glasses are hot (a view to which I wholeheartedly describe) you should look into the 2004 live action Cutie Honey movie. Mikako Ichikawa in the role of Natsuko Aki is well worth the experience.

I've always admired Kricfalusi's commentaries while, at the same time, being disgusted with all the copycats out there who think that his style is the short road to animation fame.

(Which reminds me, was I the only one here who celebrated Miyazaki's birthday some days ago?)

Doom: Bettie Page. Oh my, yes. For a different treatment, go here to find that ink-and-paint hath its charms:

John K is disgusted by that as well, especially since they glom on to precisely the wrong point.