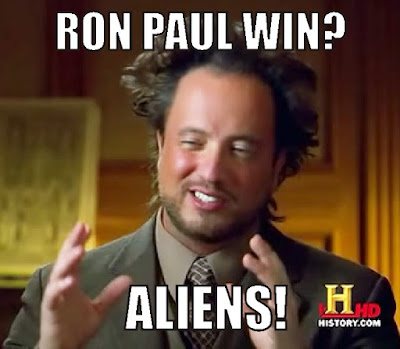 OK, I had to go look up a lot of things to finally get this.

Sometimes, Coach, no matter how high I jump, the ball just goes over the fence.

*larf* With both of you.

I have never seen the show, and recently turned off tv altogether. It was annoying my bowels. But I did catch this one as I had flickered through and saw this guy just long enough to know, until the commercials on my regular show were over. *click*

I am surprised Paul hasn't suggested an alien-Republican-Democrat-minority group conspiracy yet. Or... has he? I haven't read everything, and probably won't. What I have seen has some serious tin-foil-hattery going on. And I thought I was a serious conspiracy theorist. I'm almost jealous.

Michael- You make your old coach proud...and sad that you spent time and effort on it. Isn't the Internet FUN?

Doom- Hur hur, I took my cable box in today. I have internet, still, and Santa brought a Roku box, so if we MUST see summat on telly, we can.

I know that as a Congressman for as long as he has been one, Paul is privy to a LOT of stuff the MSM hasn't or won't blab about. Is he perfect? No. Is he a sight better than anybody else on the field? Yes.

How is it that so many of the people I like are Paulites? No, never mind. Friends of mind trump the rest, somehow. You have to wonder about Christ with the tax collectors and such. Only, all that are left are tax collectors in the literary sense, sinners. Never mind, but there is something in there (or my water :p ).