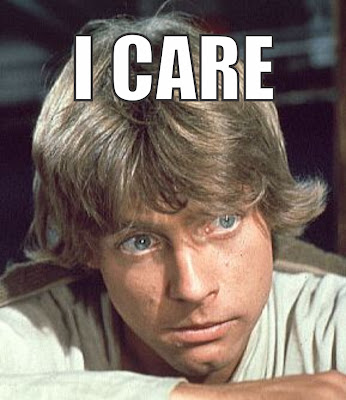 I wish to be carefree. Care-free. There is too much to care about. I have been enjoined to care about ice melting, and polar bears having to swim in it. Now I am told that Arctic ice has grown hugely this year. I suppose they want me to care about that, too. The bears may need ice skates

I am far less hirsute than once I was. There are commercials and billboards telling me about hair growth methods. They want me to care about my hair (most of the guys in the ads look better in the "before" shots. They look fatter "after".) My email spam filter is full of things about parts of my body that need improvement by their lights, and I should care about that. I care that they want to separate me from my money to fix problems I don't have. I regularly get phone calls from "firefighters organisations" or "police organisations" who want me to care enough to give money to them so their telemarketers can get paid. (I give to my local departments directly. Don't fall for obvious telemarketing, when the background sounds like the audience at a boxing match with all the other marketers calling all their other marks for funds.) We are often besieged by people intensely interested with our using their method or product to make more money. I have learned that their intensity is really aimed at our bank account. Sorry, I do not believe in altruism, doubly not from a cold-caller. I don't care about them, or their offers.

I have been called upon in the past decade to care about large financial buildings mysteriously telescoping into their own footprints after being hit by airliners. I have been told to care about bearded men hiding in caves plotting our national demise. I have had "lather, rinse, repeat" about Iraq, Afghanistan, Libya, now Syria. I am told to care that Israel...whatever. I am told to care about how dreadful our healthcare system is, and that I should care to have my pockets raided to pay for others' healthcare in our dreadful system. I am supposed to care about Congress, and our political process, and representation, of which I see little; thus, I care little. I am supposed to care, because our President and First Lady care. They appear to care more about golf and travel than about my needs. I am supposed to care that groups are upset at my group over things that my group haven't done in a century and a half.

I don't care about these things.

There is a thing called Disclosure. It is the Holy Grail of UFO-dom: getting the Guv-mint to admit that there are extraterrestrials, that UFOs are alien spacecraft, and that MacArthur learned to smoke a corn-cob pipe from the Greys in a downed foo-fighter. Never happen. Not caring anymore. And Georgr Noory, I don't care about "Contact", either. Lousy movie. "Cosmos" was much better science fiction.

My wife and I have a life. It is called Work. We do work for tons of people, and the vast majority are ginger-peachy; the snowflakes, and the public school teachers who cannot follow directions and get an order done correctly, and the people who expect my schedule to bend, and who jump ahead of others through their poor planning, well, I'm supposed to CARE that they don't want to look dumb, if they are even capable of realising it. I'm beyond caring.

If you are reading this and have the idea rabbiting through your head "Well, that's not very CHRIS-chun." go ahead. I DON'T CARE. I do not stand before you for judgment.

I'm supposed to care that womyn fear me, because I am a man, and therefore a rapist by nature. According to my spam, they should have no worries. But I don't care. If they want to live like scared twelve-year-olds perpetually telling ghost stories around the campfire, that's their lookout. Watch out for the guy with a hook for a hand.

Environmentalism-ists invariably have a new Dire Prophecy that makes Nostradamus look like an optimist. They are invariably wrong, and have to change their terms, move their goalpost. Not caring.

There is an endless number of things waving at us, saying "Hey, listen!" in a high squeaky voice. There is a care surplus...every day if it's not GMO, it's the bees, or aspartame, or the latest heresy spouted by a huckstervangelist...or our President. It's Lindsay Graham flouncing about worrying us over nukes in Charleston Harbor.

Every day brings new things to care about. Well, I'm done. I have a care gap. We cannot care anymore. Those synapses have burned out. The Giving Tree has withered.

Is it care or is it the incorrect forms of care?

Communal care, usually, is about as good, and useful, as communal forgiveness. There are rare forms of both that are tolerable if not preferred. Toilet paper is much more valuable and also leads to better ends, in every way you could take that.

I do care, deeply, just not about what someone else is telling me I need to care about. As well, I save my sympathy and empathy for those who find themselves troubled through no fault of their own. The rest? Let them sink or swim based on the hubris that lead them to their fate. And may God have mercy on their souls, if that is the way of it. Amen.

I see you are burning out from the caremongers, clowns, and fools. Hmm, and knaves. Take a breath, relax, have a great weekend with the Mrs., and come back recombobulated. :) Hmm, can you afford a clown punching bag? Or better, a mime one? Oh... I need one of those latter ones. I hear they are soundless even when punched. Yum!

It is the great cataract of care demanded by everyone, legitimate or not. Whitewater caring.

This bleat may be the beginning of stepping back for us. Recombobulated. I use that word!

The mime punching bag is genius. We had a shirt in the early '90s of a mime centered in a gunsight: "A mime is a wonderful thing to waste".

Awwwww! YOU'RE JUST BEING INSENSITIVE!

How's this for a theme song: https://www.youtube.com/watch?v=DFG9dwolo3Q

That will work, Rigel.

Hmm, Rigel blinded me with... science? I, being the caring man I am, would absolutely love to work on her give a damn. Yum!

@Doom --- actually I would prefer Ms. Sakamoto from the "Blinded Me With Science" video . . . or the Pearle Naughty Librarian. But that's just me.

On the subject of care: I've sort of modified a comment from Proudhon and make my rule of thumb "What do I care about? Anything I can put my hand on". Sometimes it's nothing more than holding a door open, or helping a fellow arthritis sufferer into a seat. If I can put a face on the things I care about then it beats what I call "boutique activism" (support a cause/get a pin to wear).

Rambling again. Some of my meds didn't arrive on schedule.

Well, she wasn't bad either, Michael. At this point, Pamela from Cherry 2000, or... a ton of other women, might just do. Maybe not, nubile they probably aren't anymore. But I was just barking, mostly.

You USE it? I thought I invented it, just then. *shrug* Still, I like that it was familiar at least. I must be in the right neighborhood anyway.

That last was me.

If you want to see Pamela Gidley in a role with more teeth, look for a 2002 film entitled "Landspeed" (it used to make the rounds on cable some time back). I note she's on several television series and might make a point of catching an episode or two.

Urhm, I don't like Billy Zane. Not sure what it is about him, either. It's a clash of egos, maybe? Styles?

@Doom --- I guess it's just me but I have no problem with Zane. I liked the attitude he brought to "The Phantom" and enjoyed his role in "Orlando".

Oh, right, you may have just named at least a part of the reason... Titanic. Being talked into watching part of that movie before I found something, anything, better to do... was it toe nail trimming or something else? I know it was... damned important is all, comparatively. Not even buttered popcorn and some lady lovings could entice me. Blanked most of what little I saw of it out. That's not all of it but explains some of it.

I see him as a pretty boy Romeo jerk. One who can't really handle what his mouth puts out, except with women, but then, like that's a trick. Try that in the bare-knuckle arena, all I'm saying.