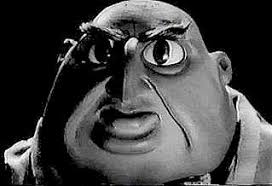 The links aren't clickable. Worse, I can usually just highlight and link through another page, but I can't even highlight the links. Now, I am rather curious but I don't trust my eyes and hands to type between pages to try and get the right YouTube vids.

It sounds like you have indicated you are a few years older, but these were definitely my type of shows, and I dug through to try to find these. That first guy... almost reminds me of the guy from Wild Wild West, the side-kick (the orignial), albeit in "disguise". Gawd they had awful disguises, as if not to confuse the kiddies?

If you remember the opening "summit meeting" scene from "You Only Live Twice", the Russian Diplomat who is sneeringly accusing the Americans of complicity in the matter of the missing space capsules is Murcell.

I can't put my finger on why I didn't appreciate "The Champions" more than I did. My main memory is the opening credits, with Our Heroes standing in front of the Jet d'Eau.

Doom, there are no links. Now I may add one.

I am teetering on the brink of 56 years.
Yeah, Murcell has an Artemus Gordon vibe.

Michael- Yeah. I read that in his Wiki entry, I believe. Now I must watch it again (which is no hardship; it is my favorite Bond film. "Sexiful, Bond-san."

The opening credits for "The Champions" is really neat. The "Jet d'Eau" is also a favorite of mine. I would encourage you to watch it with a grown-up eye.

"You Only Live Twice" is your favorite Bond film? Interesting. I, of course, love it because it raised the bar for super-villain headquarters. I read where one reviewer sneered at the film, saying it was like watching an episode of "Thunderbirds".

If you've seen "The Spy Who Loved Me" (and I suspect you have), you've spotted another Supercar voice actor at work. Cyril Shaps was one of the two scientists killed by Curd Jurgens early on in the film (to get a better look at him, check out 1974's "11 Harrowhouse", where he plays Wildenstein the diamond cutter).

I must admit to a mild antipathy to SUPERCAR Season 2, and Cyril Shaps plays a large part of that, along with Gerry's and Sylvia's execrable kiddiefying of the writing. If Murcell had been available, it would have been a major improvement. Had they only a tin can full of nails, shaken, as the voice of Popkiss, were the episodes written by the Freres Woodhouse, it would have been a vastly improved season.

So it wasn't just the change in the way the theme song was sung?

Seriously, you have a point in that there isn't much to recommend the second season. I know Kez Wilson was fond of "Operation Superstork", and I rather liked "Atomic Witch Hunt" and "The Day that Time Stood Still", but that's about it.

I didn't even think about the Mike Sammes Singers version of the theme (at least it wasn't the Nelson Riddle cover).

Atomic Witch Hunt was a standout episode (in fact, it is the ep I most remembered prior to the shenanigans at BR1. Masterspy and Zarin rocking back and forth atop the radio tower is great.) The "Time Stood Still" ep involved that most dreadful of Anderson conventions: Bobby Ewing in the shower.

Why exactly wasn't Mitch barbequed in an earthen pit with bananas and peanuts?

Aaron, my son Noel's best friend, and our practically-adopted kid, watched SUPERCAR at the shop when I had to feed my inner Mitch a few months ago, and got hooked! I got him a set of DVDs for CHristmas. He was a happy camper.

---The "Time Stood Still" ep involved that most dreadful of Anderson conventions: Bobby Ewing in the shower.---

For a moment I thought you were going to say the most dreadful of Anderson conventions was the spinning flying saucer. ALL of Anderson's flying saucers spun around. One of the few things he did that drove me crazy.

But I really LIKED the "UFO" spinners! They got them balanced well.