"Back to the Future" fans wax wroth over heinous hoverboard. 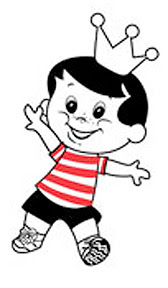 Haven't seen THIS slogan in a LONG time. There MAY be a reason....

Mattel was the premiere toy company back in my day. REMCO, Hasbro, Topper...no-one held a candle to happy Matty, Mattel's corporate shill. You could expect quality, playability, TRENDINESS, but with a lifespan! Mattel tended to create trends, rather than ride them.

Hot Wheels, Major Matt Mason, a myriad of other toy lines;  you could expect quality. I have a 40-plus-year-old pull string toy whose voicebox still works! Heck, Mattel made the stock and other plastic bits for the eminently jammable M-16, for playing army guys in Southeast Asia.

Alas, the Baby Boomers grew up, our adult expectations went down, and Mattel met them.

This is not an endearing logo. He looks like a hood, Jughead after his first taste of crack, or one of the Joker's goons. Confidence is not inspired. This is not to say that the Matty Collector idea is a scheme gone wrong; much that I have seen is quite good: the Ghostbusters PKE meter prop would be usable for a good fan film. When they are good they are very, very good. When they are bad....

Which brings us to the Back to the Future Hoverboard replica. Fans and collectors have lusted after this beast for some time now, and the original designer for the movie was brought in to consult. On the promise of movie-quality proposity, Matty presold the things for $120. One. Hundred. Twenty. Dollars. This for a hoverboard that doesn't. It is supposed to glide over certain surfaces like carpet. Apparently, it doesn't even do that well. Beyond the Marquee reports on the whole thing, includeng BTTF designer Bob Gale's take on it all. The slaughter on the Matty discussion board is bloody, with collectors venting their spleen, and the Matty mods banning the righteous miscreants. They didn't even get the lenticular look right (remember the flicker rings?). Apparently, what you get is a pink board with stickers on it, and a stand that doesn't work well. Where do I sign up?

This naturally moves me to a rant on "the tuna doesn't taste as good as it used to". The aforementioned talking toy still works after over forty years. Bell Telephone equipment was so tough you could almost hammer nails with it, and still your call quality was excellent. The China/Walmartification of the marketplace leaves a hunger for quality products again.

The Moral: If you want quality collector's stuff, don't buy it from a logo that looks like it grew up in Juvie.

I'm almost with you. First, though, who in the world, in this day and age, pre-orders anything that hasn't been nailed down? I don't even pre-order games anymore (buy old ones with pedigrees and solid attestants (and patches, ugh)). What was it P.T. was said to have uttered (if he patently denied saying it, the truth may never be known)? Ah, there is a sucker born every minute. That rate has increased via population and such, probably exponentially. We need Spock to get the new timing on that birthrate!

As for the old quality? True enough, but if I recall correctly, the telephone service, and the price for that device, were... as much as I am paying for a much more serviceable (if admittedly fragile) traveling communication device I have today, without even bothering to figure in the elapsed time exchange rate! Heck, each call had to be paid, even local, and local for us in Iowa included only the town we lived in, no matter how small. The damned service was absolute murder.

The thing is, you have choices. Pay an arm and a leg and get what they give you, or pay less (comparably, and with the decline in the worth of the dollar, which makes that seem necessary) and... hmm... get what they give you. You won't win, economically, in the market, in this world. My guess is if you happen to be rich, you got that way learning to live with the crap people sell, using it for what it is good, and not bothering much beyond that? Well, and making so that the people you hire is where the quality shows... or... some of them, key people.

As a homeowner, I am learning to live with flaws until I can fix them myself. There is no way I can get my whole home rewired, de-batted, or even made up to snuff in all the little ways, even if I did it all myself, not quickly... years it will take. There is no way I can even take care of all the little things that should be done. Who WOULDN'T calk the showerhead outpipe where it comes out of the wall? Argh... No, do it yourself or get used to living with... lessor. *shrug*

Oh, urhm, I hope I didn't kill your rant though. It was a good rant. *le sigh*

Like so many other things in our world, toys (and collectables) are being designed and put together by people who don't care about the genre they spring from.

At least on the corporate level.

(Putting it into perspective, I'm still patiently waiting for what I feel would be the only worthwhile collectable from the 1998 LOST IN SPACE movie: a Lacey Chabert-as-Penny action figure.)

(For that matter, where's my Dennis Hopper figure from WATERWORLD?)

If Juvie Hall Mattel wants to move some product, they've got to put some stone serious geeks in charge of development.

I honestly think geeks should be put in charge of a lot of things. Not ultimate power, mind you, that's just crazytalk. But corporate, societal, and some bureaucratic, levers in America, China, India, Taiwan, South Korea, and the rest, could really see some neat things if they tried it. But that scares CEOs, politicians, and the rest, more than almost anything, because they can't control that type of... behavior. heh.

Doom- I was thiking merely of the hardware aspects. If we could get current hardware to match the improved and less-expensive service, it would be utopian!

Hey, I'm all for that then. I'd LOVE to be able to use my smartphone like a hammer, from time to time only mind you. And it might even be made into a fine boomerang, so long as this one would come back, maybe even with a rabbit or squirrel... or isn't that how they work. Never mind, just... taking the ball and running, with a fever, in the wrong direction? It's fun though!

They have better stuff kinda' like that at NAPA.