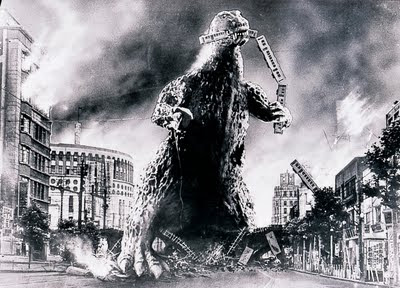 So, the victory cigar is in fact Nathan's bigger-than-the-bun beef franks. Nathan's are well worth the premium price, as they are a frank with real flavor, not just extruded meat-paste flavor. Garlicky goodness!

Why a victory cigar? Riatsila and I just got back from G-Fest 18, the Godzilla and other giant-monster fan convention in Chicago. Well...Rosemont, but a nod's as good as a wink to a blind Barugon. We have had another record-breaking sales weekend, but that isn't the best part. We had a good time, an awesome time, a fun time. YAAAAAAY! J.D., Ruth, and Peyton Lees put on as good and drama-free con as one could wish for. The attendee number I heard was 1200, but that isn't official. The amazing thing is that those 1200 people were smiling. They were happy. They were often happy families! I do dozens of conventions a year, and G-Fest takes the prize as the fun, happy con.

The Kaiju Brothers were there, three guys who love giant monster movies, and who love Things Aardvark. Great seeing you all!

We ate the fat and drank the sweet. especially at Romano's, a family Italian place in a little strip mall in Rosemont. I was verklempt, the food was so very good. It is as good a reason as any to visit Chicago. A Godzilla-sized reason!

My friend, the redoubtable Kez Wilson and his son were at our booth. Kez is the artist side of the Wilson-(Michael) Wolff pairing that produced the initial SUPERCAR comic in the early 2000s.
(Sign up to the Yahoo Group and enjoy the excellent writing, too!) The Wilson son discovered the gaming room and spent the weekend displaying superiority at the Wii Godzilla game. Kez stayed at the booth with us, doing Kaiju and cartoon character card sketches for fans, and flogging the MONSTERVERSE property he is involved with. Kerry Gamill is behind a horror comic with Bela Lugosi as the title's "Cryptkeeper" host. A good time was had by all!