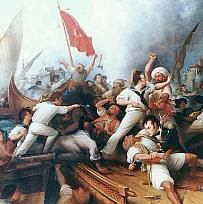 Freedom of Religion is a cornerstone of the YouEssofAY.

What worries me is the historical context of the 1st Amendment to the Constitution. Just as (deliberate) misreading of the 14th Amendment outside of its historical milieu has saddled us with the anchor baby situation of today, has an over-broad view of the 1st Amendment opened the door to some of our thornier current issues? Since the majority of what was "religious" to the Founders came from "Biblical Religion", could it not be argued that religions foreign to our shores, non-Biblical in their scope, and inimical to the Founders' intentions, should not be included in our understanding of it? Even in Jefferson's time, the Muslim Barbary pirates were a pain. (I find "Dummies.com" to be preferable to Wikipedia.)

So, the obvious question lurking here is: Should Islam even be considered under the 1st Amendment, since it was foreign to our shores at the time of the writing of the Constitution and The Bill of Rights, and provably antagonistic to our Republic over two centuries ago?

I am serious in my question, and it is a question I believe should be asked. I am not printing up t-shirts and banners demanding the ouster of every Muslim, Scientologist, and Neo-Zoroastrian from our currently ill-championed borders, but as a strict constructionist kind of guy, I would like some discussion of this idea.
Posted by The Aardvark at 7/22/2011 05:18:00 PM

My feeling on the matter is that it sounds easy to ban religions which appear to want to reduce other people to carpet dust. But, as with so many of these ideas, once we go in such a direction, we're starting on a slippery slope. I would much rather deal with the problems inherent of Freedom than live a single day under the consequences of any alternative.

Well said. Outside of merely stirring the pudding, I want to see people's thoughts on this. I have heard weird takes on other Constitutional issues, and especially the "living document" idea which reduces the rules of the game to mere post-modern meaninglessness. (Sorry, I repeated myself.)

The Islam issue is more an immigration one than a religious one, but I'll bite. Just as we do not allow Mormons to have 15 wives, we should not allow Muslims to blow up buildings and commit mass murder. The actual problem has it's base in a false presumption that all cultures are equal, and a "white guilt"-laden Washington corruptocracy that FEEEEEELs borrowed bribes make everything better.

The answer, I feel, is not to treat all cultures as equal, but instead to insure that (at least in the USA) all individuals can expect equal treatment under the law, and that any actions they commit cannot be swept away by hiding behind a particular religion.

The time to prevent Muslims from taking over the US is before they get here. Now that there here, we cannot get rid of them, without destroying that which makes here such a great place.

That ship has sailed, and we are coming apart at the seams in many other places as well.

Oh well, we had a good run.

Michael-If I may borrow the "No True Scotsman" argument (tho' sometimes the Scotsman may be Scandinavian), the "Christian" who kills for a Cause, or blows up an abortion clinic is obviously not playing according to Hoyle. Our Founder clearly taught the opposite tactic: love your enemy (do practical good), and teach the Good News. It can be argued that he is not, in fact, a Christian, or is at least one who requires serious medication.

The Muslim is COMMANDED to kill or subjugate the infidel (the non-Muslim). Based upon Mohammed's teaching, the peace-loving "just wants to get along" Muslim that is lionised by the pundits is in fact a bad Muslim, and worthy of death.

This problem is exacerbated by the "equal cultures" ideology mentioned by Ted. We desperately want to think that everyone is EEEEE-qual, when that is not the Founders had in mind; rather an equality of opportunity, and equality under the law.

@Giraffe: Yes. But ridding ourselves of those who are here illegally, or are here to do illegal things, does not mean that we must lose our American identity, or that Lady Liberty shall founder in the harbor. Operation Wetback went swimmingly.
It requires a national will, and unfortunately that will likely come only when things have gone too far, and things are ugly already. Dhimmitude does not have to be America's fate.