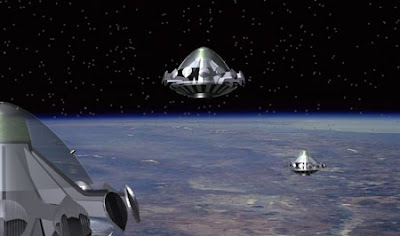 I discovered a wonderful 1950's series called "Science Fiction Theater", a syndicated program from Ivan Tors of "Flipper" and "Gentle Ben" fame. From 1955-1957, this anthology explored science, space, time travel, and the paranormal in 30-minute bites. It is full of '50s sensibilities, and you may recognize many a guest star. Here is Wikipedia's description of an episode:

An obsessive scientist is unaware his wife is gravely ill as he works to develop a machine for generating high energy photons. He believes the photons, similar to those ejected from the sun, were the origin of life on Earth. When his "photon gun" generates living matter, he uses it to treat his wife's degenerated endocrine system with positive results. But was it the technology or his renewed love for his wife that caused her to rally? Episode is heavy with 1950s religiosity and tacit Frankenstienian warnings about man meddling with things he shouldn't.

A true horror tale, with that 1950s religiosity and all. That is what chaps me. This quasi-warning by the wiki writer is so typical of the quasi-intelligentsia that tend to write and proctor the online encyclopedia. It is also typical of the progressive/left, period. The thing that really frightens people about Beck, f'rinstance, is his unashamed faith, his daring to speak openly about God, Christ and the spiritual history of the US.

Another attitude that exists is shown most clearly in the Brookings Institute report from 1960 concerning "Implications of a Discovery of Extraterrestrial Life", part of the larger "Proposed Studies on the Implications of Peaceful Space Activities for Human Affairs".
Regarding the reaction of mankind (what Neal Boortz refers to as the 'dumb masses') to the revelation of the existence of extraterrestrial life, the report states:

"The positions of the major American religious denominations, the Christian sects, and the eastern religions on the matter of extraterrestrial life need elucidation. Consider the following: 'The fundamentalist (and anti-science) sects are growing apace around the world . . . For them, the discovery of other life–rather than any other space product–would be electrifying. . . . some scattered studies need to be made both in their home centers and churches and their missions, in relation to attitudes about space activities and extraterrestrial life.'" – page 225, n.34


Curiously, the report also suggests that both scientists and religious fundamentalists might have their paradigms most altered by the verification of extraterrestrial life.

"Anthropological files contain many examples of societies, sure
of their place in the universe, which have disintegrated when
they had to associate with previously unfamiliar societies
espousing different ideas and different life ways; others that
survived such an experience usually did so by paying the price
of changes in values and attitudes and behavior."

Poor Bible bangers will go off their nut if they learn of alien lifeforms.


A weird site called The Bible UFO Connection posits:
Organized Bible based religions are, for the most part, also silent on the UFO phenomenon, either through fear of facing the reality, refusal to recognize it or church mandated social isolation. This is an enigma in itself considering the fame of Ezekiel's wheels, the chariots of the Gods, (the verse, not the book, well maybe the book too), and other evidence of flying vehicles in biblical text. When mainstream religion does deal with the anomaly, there are two doctrinal views concerning the presence of UFOs, the holograph theory and the evil alien conspiracy. One approach states that the UFOs are holographic illusions projected by Satan to lure the congregation away from the church and into alien worship, eventually enslaving mankind. The other, more radical view surmises that the beings piloting the UFOs are actually fallen angels with Satan in the mother ship. They are lurking on the dark side of the moon or some other evil hideaway, occasionally visiting our atmosphere to abduct and implant a few of their human followers, slaughter some cows, scrawl satanic graffiti in our barley fields or run circles around our jets. Either way, UFOs are evil and UFO believers are either dupes or disciples of Satan. Contrary to the doomsday bellowing of the satanic UFO prophets, this widespread cover-up itself could easily be classified as a Great Deception, while evil soul-stealing aliens piloting UFOs are not mentioned in scripture. Certainly the cover-up is safe here, in total confusion and ignorant bliss.

(The site is doctrinally suspect, and unless you have a good grounding in Biblical teachings, and have a knack for being discerning, peruse with extreme caution.)

The cultural bottom line: Bible-believing Christians are too stoo-pid to handle the possibility of life on other planets. Their faith will implode, and their heads explode, should ET come a-calling. There will be riots in the streets, pitchforks and firebrands, and it will all make Westboro Baptist look sane by comparison.

As one of those Bible-believing Christians, I take umbrage at this. Yes, I will take ALL the umbrage. None for you. *ahem* Biblically, we are informed that there are other non-human intelligences: angels (cherubim, seraphim) and demons for starters. If you read the Bible without traditional blinders, there are even other gods, for how can one have others before Yahweh if there are no others? Perhaps they are hyper-demons. Who knows? (I bet I know Someone who does!) It would not trouble me one whit if we found lizardoids from Yed Prior (look it up!). God, being the Creator and all, may have myriads of races out yonder.

My personal opinion, ngaaaaah, and it is only an opinion, is that all the expanse of Creation lives in perfect harmony with the Creator, and ours is the only planet that blew it.

I suspect the Roman Catholic take is a tad shady. The human race fell because of Adam's sin, not the Zan from Rukbat 9. If another race in another star system required redemption, I daresay the Redeemer would appear at the appropriate time. I find the pale, blue-eyed, brunette images of Jesus to be lacking in redemptive or Biblical qualities. What would a spiky air-slug from Grumium 4 think of them? No, they would need their own Grumian redeemer.

Wow, talking about this makes me want to set fire to something, then stick it with a pitchfork.

A person with a true Biblical worldview and cosmology is proof against the slings and arrows of oddness in the news, or in the saucers.

It's no use positing that ET's are going to impact anyone one way or the other, because they are just a big urban legend. If ET's existed, they would have colonized Earth during its oxygen-rich pre-human days. They did not, ergo they are not.

Yes, extra large dimensions are cool. A tesseract is a great place to stow your gold.

So completely not the point. Oh well. Thanks for playing.

Whether it is those who worry about the possibility of ET impact on society, or the current crop of politicians whinging about clingers to guns and religion, the believers in Christ and Biblical veracity are portrayed as mouth-breathing Jordy Verrills, which is odd, because it is that belief that helped establish Western culture. This is no surprise, as the apostle Paul warned that it would be so. It is nonetheless annoying.

I have learned the TRUE reason that ETs won't show up: http://aardvarksplumbline.blogspot.com/2005/11/probing-question-vox-and-nate-deal.html.

I have memories of "Science Fiction Theatre". Mostly of the opening credits (featuring some odd sort of circular mini-antenna with a spinning attachment . . . never figured out what it was for), Truman Bradley's opening narrations and, usually, some rather pedestrian stories. Perhaps if there hadn't been competition from the likes of "Twilight Zone", "The Outer Limits" and "Thriller", the show would be more widely remembered today.

The last three clearly behave as a shield to occlude whatever shine SF Theater had. (I still think it has its charm, even the whirly thing!)