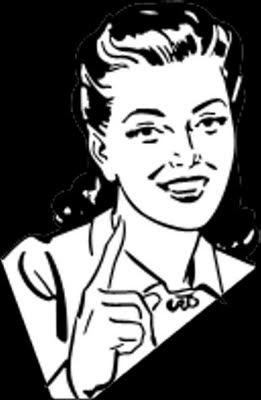 Because I said so, that is why.

I had talk radio on as room noise whilst doing laundry - the Dread Dormomoo is recuperating nicely from her surgery, but still may not do much aboot the hoose - and heard Mark Steyn parrying a female caller who was claiming that conservative talk hosts were anti-ObamaCare because they are in the pockets of groups like Big Pharma (which oddly is supportive of nationalized healthcare here). What bugged me was her naked assertion that Limbaugh, Beck, Hannitoad, and the rest are bought-and-paid-for by Eeeee-vil Corporate Forces. No proof, no footnotes, just her insistence that This Is So. It has nothing to do with thoughtful opinion derived from study, or forensic digging into public records...just making a statement, 'cos she heard it from NPR, or heard it from a friend, or read it on HuffPo, or got an ACORN email, or merely pulled it from her nethers.

Ergo, it is all true.

When did we all become sixth-graders parroting gossip about The New Girl? Wait...most of us WERE in public school sixth-grade! From K through Twelve, we are prudently not taught how to think, nor how to effectively look into a matter. I mean, Wikipedia is now accepted as a legitimate source for term paper research. In college, liberal arts education is more about fitting in, and trying to be cool for the popular profs. Rather than the avowed raison d'etre of teaching one how to think, and how to learn, modern liberal arts education methods ultimately teach one what to think, whether through indoctrination, or peer-pressure. This was true when the Aardvark was in college; moreso now.

President Obama relies upon his charisma, more than even did President Clinton. (Have I mentioned lately how much I miss Bill Clinton?) The drum-bangers and tambourine-janglers in Congress support razing our vast healthcare system and building a Rube Goldbergesque structure to distribute inadequate care equally claim to support it "because the Peeeee-pul demand it!". The poll numbers do not support this claim, and a bit of reading will show it to be a top-down effort like HillaryCare, and is just as loved by the Peeeee-pul. Seen any good Town Hall meetings lately?
Posted by The Aardvark at 9/02/2009 01:43:00 PM

There are a lot of politicians and bureaucrats with kids who sold their asses through college to get that medical sheepskin, and because they're incompetent, it's going to waste, because no competent, responsible clinic will hire them. Some sort of government work-fare space must be fabricated for them to take up...After all, everybody's "entitled" to a job, right?
THAT is the driving force behind SocMed. It has nothing to do with helping the needy, just feeding the greedy!