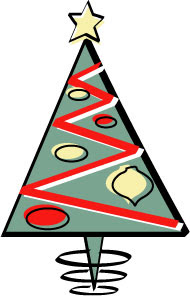 Boortz is fulminating about this:

The Staff Advisory Council voted on Monday to send university leaders a letter explaining employees' concerns. The university administration has said employees can decorate their desks but not common areas. It also canceled a greeting card design contest and renamed a giving tree for needy preschoolers a "giving garden."

In a memo to faculty and staff last week, President Wilson Bradshaw said public institutions "often struggle with how best to observe the season in ways that honor and respect all traditions.

Precisely the enlightened response to the holidays I would expect from a President of Higher Learning. NOTE: They are not banning ALL displays, "just" the public ones. The irony of the warfare being waged over the birth of the Prince of Peace is not lost on your Aardvark.

The Dread Dormomoo naturally comes at this from an off-beat tangent. She is curious as to the national celebrations of other countries, religious and secular. The question she raises disturbs me. When a nation tries to quash public displays of a religious festival, but celebrates holidays of death ( annual remembrances of the OK City bombings, the World Trade Center attack, the Pentagon attack....) what does it say about that country.

I take a "the more the merrier" kind of tack on this:
Why not have everybody's stuff out there? Christmas, Hanukkah, Kwanzaa &c. We're supposed to be having fun, not trying to be politically/religiously correct or "new tone".
My God, people are stupid!

Yeah. Let the marketplace sort it out. The more the merrier.

What boggles me is the breathtaking LAMENESS of the PC libs' ideas and names for things.

I have a suggestion...

How about we "Start Protesting" them?

I will no longer celebrate Christmas out in public where anyone can see it. Instead, I will violently tear down, shout at and generally annoy anyone who attempts to "take away" my religious symbolism.

I will enjoy watching the Christians squirm when they learn that all we have are "The Manger" scene and candy canes...

I think we need a national holiday that features lots of nudity.

Hmm...a protest holiday that features lots of nudity. I think made-up "holidays" with no cultural reference are silly, but THIS is one I think I could get behind.

I'm all for this Marchin Yuth, er, Skin Jr. Day. So long as there is ample warning as to the date, and we are allowed to be off from work. I would hate to have to use a sick day to avoid the debauchary that would quickly become a part of such a "gubernment holiday."

"Merry RamaHanuKwanzMas,
It's the PC time of year:
Every holiday display, the source of mortal fear.
Merry RamaHanuKwanzmas,
And we all must now adhere:
Oh by golly can't offend nobody on *BEEP*mas, this year!"
- Glenn Beck