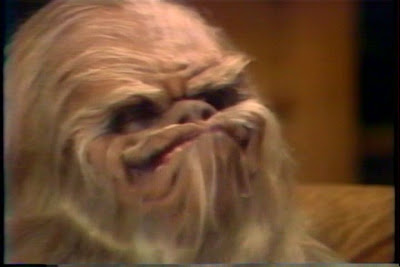 On Life Day and Other Sorrows.

I was speaking with the Dread Dormomoo of the ungrateful reaction Some have had to my heartfelt (or maybe it is just reflux) Holiday offering. She has not seen the Star Wars Holiday Special, and I have not shown it to her, as I live under the same roof with herself (though I AM certain that our marriage could take it, with a year-or-two of counseling. After all, I took her to see Laserblast a few months after we were married...)

The DD, upon hearing the list of actors who appeared in the Holiday Special commented
upon them as "lemmings jumping the shark".

She REALLY should blog, you know.

On the original point, it is fascinating to me that I have never heard a solitary soul admit to LIKING the SWHS. It could be a real tool for peace. Sec'y of State Rodham declares to the whole Mid-east" You people get along together, or we will SO make you watch the Star Wars Holiday Special .".

I'm quite surprised that Reagan didn't use the tactic, though that could be why the Iranian hostage situation ended when he was sworn into office. I suspect that they play it at GITMO. Makes the detainees beg for waterboarding.
Posted by The Aardvark at 11/20/2008 09:04:00 AM

Never heard of a Star Wars Holiday Special, but I did suspect that was a baby wookie...Do I get partial credit?

It's the toothless Grampa wookie.

You DO get credit for never having heard of it. I think it's a sign of Election.