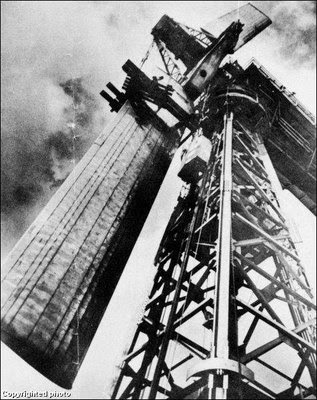 Contrary to the popular opinion that your Aardvark is a tool of Big Oil and Our Friend Mr. Atom, I was an environmental studies major in college. I was also a waiter, though I was not in the theater department. Being loquacious, I happened to mention to a couple of ladies from Vermont who were enjoying our prandial offerings the fact of my major, and my interest in alternative energy and sustainable organic gardening. They acquainted me with the Grandpa's Knob project in the early forties.

The first large-scale wind turbine built in the United States was conceived by Palmer Cosslett Putnam in 1934; he completed it in 1941. The machine was huge. The tower was 36.6 yards (33.5 meters) high, and its two stainless steel blades had diameters of 58 yards (53 meters). Putnam's wind turbine could produce 1,250 kilowatts of electricity, or enough to meet the needs of a small town. It was, however, abandoned in 1945 because of mechanical failure. (Answers.com)

On a hilltop in Rutland, Vermont, "Grandpa's Knob" wind generator supplied power to the local grid for several months during World War II. The Smith- Putnam machine was rated at 1.25 megawatts in winds of about 30 miles per hour. It was removed from service in 1945.(www.eia.doe.gov)

In 1941 the world's first megawatt-size wind turbine was connected to the local electrical distribution system on Grandpa's Knob in Castleton, Vermont, USA. It was designed by Palmer Cosslett Putnam and manufacturered by the S. Morgan Smith Company. This 1.25 MW Smith-Putnam turbine operated for 1100 hours before a blade failed at a known weak point, which had not been reinforced due to war-time material shortages

Not a bad go for 67 years ago. While I do not relegate wind power to cloud-cuckoo-land, I recognise that it is only a facet of the Answer to our energy needs. Do we need wind power? Yes. Do we need nuclear power? Yes. Coal, fusion, solar? Yes, yes, and yes.

We need maser power satellites, too. AND we need oil. Our current civilisation is built upon oil technology, and it is that industrial base which will engineer the next technological revolution. To generalise, politicians operate in the shade of half-truths, and out-and-out lies.They parrot special interest lines to divide the rest of us, following the most important rule: Let's you and him fight. Get 'em out of the way. Let the venture capital crowd do what they do best, let the energy biggies do what they do best. Your lights, TVs and computers run with nary a flicker, and your espresso machines do not sputter out at need. This is where we are. To continue this happy circumstance, we MUST drill for more oil, looking to the future. The issue is not whether it will lower gas prices today. That is a herring of the red persuasion. The point is that in the coming decades, will we be able to continue our current level of technology, while at the same time developing the power tech of the future?

To borrow from a comment I made over at PL's: let's not saddle our children with the opportunity to live as a developing nation. We need a robust industrial base to produce the next generation of energy sources. That alone is reason to increase domestic production now, so we CAN produce the sci-fi technology needed tomorrow.

C'mon, it's the 21st Century. I'm still waiting on my rocket pack, not to mention my Li'l Atom Home Reactor.

I feel so cheated.

From what I understand there's as much (if not more) oil under the western half of our country as the entire middle east.

I get the feeling most people aren't even aware of this.

Space travel has so many ridiculous rules and regulations on it that advancing to the point where power satellites would be cost effective could take centuries.

We are our own biggest problem. If we could just manage to get out of our own way these problems would not appear insurmountable.

The sad thing is that we have the technology to do it NOW.

I know. We can send the politicians into orbit.