I was working late last night (I prefer shift 2.5, as the 'phone stays quiet.), and put on an old film from 1968: "Mission Mars" starring that workhorse of small and large screens, Darren McGavin, Kolchak his own self. 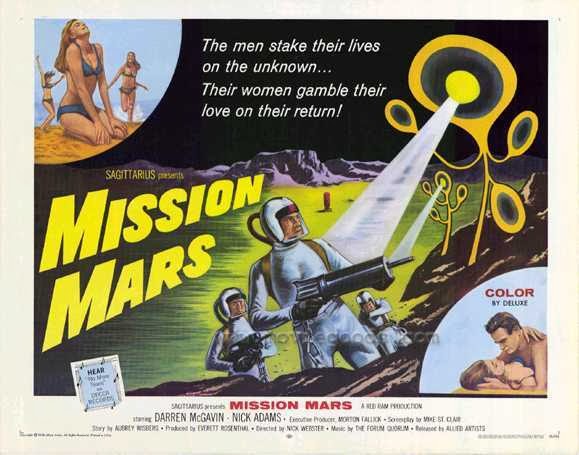 Also stars Nick Adams, the peripatetic character actor who everywhere played himself, rather like a small wiry Patrick Warburton. McGavin plays the commander of the first manned mission to Mars, and Adams the geologist (Aresologist?). George de Vries, one of Ivan Tors' stable of regulars, plays the navigator who apparently wears red undershirts.

They land on Mars, lose their supply module, and meet this guy: 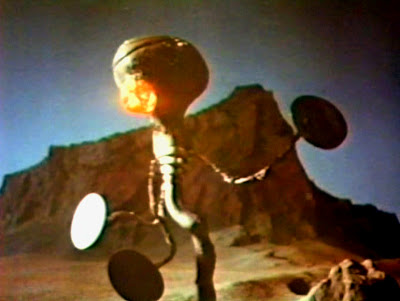 Who ultimately turns the navigator into this:

and kills him. The body is dragged into this: 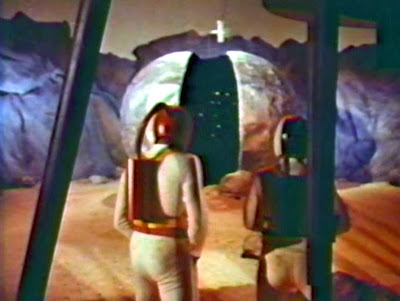 Did I mention this is low-budget? It makes "The Green Slime" look polished.
Mission Control inexplicably dubs the bulb-critters "Solonites". If something has a name, you can defeat it. Write it backwards on its forehead or summat.

OH! They find a freeze-dried cosmonaut, as well. He gets better.

Beside McGavin and Adams, I did not recognise anyone else in this movie, not even the effects house. They do clever things with miniatures, strobes and fades, and thus propel the movie to the dizzying heights of could be worse. They are Haberstroh Studios, and they did the SFX for "Santa Claus Conquers the Martians". That is their only other IMDB credit.

Editorially, they use lots of stock shots of NASA rocketeering, none of which matches well with the Mars probe model they use for long shots.

It is a fun Jiffy-Pop movie, chewing gum for the mind. Bear in that selfsame that 1968 is the year that saw the release of  "2001: A Space Odyssey.

It's been years since I've seen this movie so I've forgotten the bit about "Their women gambling their love on their return".

What I do remember are the astronauts wearing spacesuits on the Martian surface, and wondering why they went to the effort because the helmets were obviously not entirely enclosed.

(Trivia note: the rocket footage used for the mission launch was the Apollo 5 rocket which was an unmanned test of the LM in Earth orbit.)

Makes me yearn to sit through THE ANGRY RED PLANET again.