Running from the church for dear life. 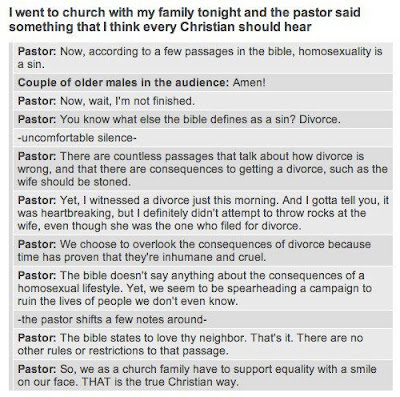 There is so much wrong, here. A general reading will settle that NO "pastor" said this, ever, unless he had never studied, Bible, theology, logic, reading, or Bible.

Rev. Strawman for the win.

What did he get right, this putative parson? "Homosexuality is a sin." Yessir. So is a plethora of other activities. More on this later.

Divorce is a sin. It is not a stoning sin in the Bible. Anywhere. Adultery, yes. Divorce, no. Herpy derp. Jesus made clear what constituted a legitimate divorce:

3 The Pharisees also came unto him, tempting him, and saying unto him, Is it lawful for a man to put away his wife for every cause?
4 And he answered and said unto them, Have ye not read, that he which made them at the beginning made them male and female,
5 And said, For this cause shall a man leave father and mother, and shall cleave to his wife: and they twain shall be one flesh?
6 Wherefore they are no more twain, but one flesh. What therefore God hath joined together, let not man put asunder.
7 They say unto him, Why did Moses then command to give a writing of divorcement, and to put her away?
8 He saith unto them, Moses because of the hardness of your hearts suffered you to put away your wives: but from the beginning it was not so.
9 And I say unto you, Whosoever shall put away his wife, except it be for fornication, and shall marry another, committeth adultery: and whoso marrieth her which is put away doth commit adultery.
10 His disciples say unto him, If the case of the man be so with his wife, it is not good to marry.

His disciples got the message. There is not a stone in sight.

"We choose to overlook the consequences of divorce because time has proven them to be inhumane and cruel."

Oh, if that were true.

"The bible does not say anything about the consequences of the homosexual lifestyle." saith the preacher. Herewith he should turn in his credentials, if there really was a "pastor" who said this.

English Standard Version (ESV)
9 Or do you not know that the unrighteous will not inherit the kingdom of God? Do not be deceived: neither the sexually immoral, nor idolaters, nor adulterers, nor men who practice homosexuality, 10 nor thieves, nor the greedy, nor drunkards, nor revilers, nor swindlers will inherit the kingdom of God. 11 And such were some of you. But you were washed, you were sanctified, you were justified in the name of the Lord Jesus Christ and by the Spirit of our God.

King James:
9 Know ye not that the unrighteous shall not inherit the kingdom of God? Be not deceived: neither fornicators, nor idolaters, nor adulterers, nor effeminate, nor abusers of themselves with mankind,

10 Nor thieves, nor covetous, nor drunkards, nor revilers, nor extortioners, shall inherit the kingdom of God.

The ultimate consequence: homosexuals (as well as other habitual practitioners of other sins) will not inherit the kingdom of God.


Romans 1 (KJV)
18 For the wrath of God is revealed from heaven against all ungodliness and unrighteousness of men, who hold the truth in unrighteousness;
19 Because that which may be known of God is manifest in them; for God hath shewed it unto them.
20 For the invisible things of him from the creation of the world are clearly seen, being understood by the things that are made, even his eternal power and Godhead; so that they are without excuse:
21 Because that, when they knew God, they glorified him not as God, neither were thankful; but became vain in their imaginations, and their foolish heart was darkened.
22 Professing themselves to be wise, they became fools,
23 And changed the glory of the uncorruptible God into an image made like to corruptible man, and to birds, and fourfooted beasts, and creeping things.
24 Wherefore God also gave them up to uncleanness through the lusts of their own hearts, to dishonour their own bodies between themselves:
25 Who changed the truth of God into a lie, and worshipped and served the creature more than the Creator, who is blessed for ever. Amen.
26 For this cause God gave them up unto vile affections: for even their women did change the natural use into that which is against nature:
27 And likewise also the men, leaving the natural use of the woman, burned in their lust one toward another; men with men working that which is unseemly, and receiving in themselves that recompence of their error which was meet.
28 And even as they did not like to retain God in their knowledge, God gave them over to a reprobate mind, to do those things which are not convenient;
29 Being filled with all unrighteousness, fornication, wickedness, covetousness, maliciousness; full of envy, murder, debate, deceit, malignity; whisperers,
30 Backbiters, haters of God, despiteful, proud, boasters, inventors of evil things, disobedient to parents,
31 Without understanding, covenantbreakers, without natural affection, implacable, unmerciful:
32 Who knowing the judgment of God, that they which commit such things are worthy of death, not only do the same, but have pleasure in them that do them.


Another consequence: being filled with lovely stuff like this:

And since they did not see fit to acknowledge God, God gave them up to a debased mind to do what ought not to be done. 29 They were filled with all manner of unrighteousness, evil, covetousness, malice. They are full of envy, murder, strife, deceit, maliciousness. They are gossips, 30 slanderers, haters of God, insolent, haughty, boastful, inventors of evil, disobedient to parents, 31 foolish, faithless, heartless, ruthless.


Not a stone in sight. NOTE TO PEOPLE WHO MAKE UP STUPIDITY LIKE THIS ON FACEBOOK: the Old Testament and New Testament are different. Christians are not under the Law of Moses. No stoning. Strawman fail.

But really, this consequence, this filling, makes one unpleasant to be around. We all know people who can twist any innocent thing into loathsomeness. Many of the homosexuals I know fit this template. My father certainly did, and his cronies. This is also true of many devotees of "straighter" sexual hobbies.

Consequences. There may be worse things than stoning.

Next, the coup de grace: The bible states to love thy neighbor. That's it. There are no rules or restrictions to that passage. Uh, yeah there is. "As thyself".  If I am in peril of missing out on the kingdom of the God who loves me so much that He wants to spend forever with me, I would like to be told. Not condoned. Warned.

This perilous preachment ends with a goalpost- moving swerve:

"So we as a church family have to support equality with a smile on our face. THAT is the true Christian way."

The church has no responsibility or authority to support anything that clearly defies and contradicts its charter, the Bible, even if all of society finds it chic so to do. The true Christian way lies in obedience to the whole counsel of God's Word, not a cherry-picked half of a verse.

NOTE: this is not an anti-gay hate screed. It is an exercise in logical thinking, and looking at what the Bible REALLY says, rather than at mere wishful thinking. There is another consequence:

"...but whoever causes one of these little ones who believe in me to sin, it would be better for him to have a great millstone fastened around his neck and to be drowned in the depth of the sea." - Jesus

Dad. The West is dead. Nobody cares what the book says anymore. You're Jeremiah.

That doesn't detract from the truth, but bear in mind that my generation is one dubstep remix of Tannhauser away from Kristallnacht 2.0.

Yes to all. I still must do what I can, even if it is shaking my cane at Stoo-pid.

The credulity of Western yout' astounds even me.

And Edith Schaeffer has passed.

"my generation is one dubstep remix of Tannhauser away from Kristallnacht 2.0."

This wins the internet.

I have to drink to deal with my generation. By and large, they're intellectual retards. Oh they're very bright, but they have no horse-sense to go along with their .net derived aspergeroid intellects. A few good men and women have slipped through the cracks of madness, but very few. Very few.

Just wait 'til it happens. I have not yet been wrong.

And I'm sad about Edith Schaeffer. She was a true bright. ;)

I suppose some believe what they write, as copycats, but honestly, I think to know enough to even write what they wrote means they do know.

As for the generational decline? The great human advance ended with my grandparent's generation. Oh, they weren't perfect. What they were was humble, mostly, and hard working. My mother's generation were a group of non-conformist ne'er do well's, looking for something for nothing, from sex, to leisure (drugs and alcohol) to free money.

My generation was lost. We were pampered because there were so few of us, our ne'er do well parents were too lazy to have more than one or two of us, then didn't want to deal with us, or lose us, so destroyed us. Your generation? One level below us, pampered by the pampered. Exceptions, sure. By accident and incident my mother was too poor, and harshly raised, to contemplate spoiling. I was probably the only kid in high school who didn't get a car. More, my mother blew the money I gave her to buy a car I had picked out from my uncle. She being an alcoholic. Bleh.

As for the next Reich? Personally I don't think there are enough farmer's sons to produce anything like the SS. Even brownshirt types would be hardpressed to make a difference with what is in stock for personnel. After seeing Occupy groups, I simply don't fear it. Oh, I think it is coming. I just think it will be crushed hard and fast, internally and externally.

Of course I know that these are made up. This is as transparent as Sandy Hook. It amuses me to deconstruct their foolishness as though it was genuine. It is a useful exercise for me, and may edify, or at least entertain (or even annoy) others.

Your mom? My dad. I do not understand the appeal of drunkenness.

I hope you don't mind Aardvark, but...

If Michael W. is around, I would like to get him a message. He as been tinkering with Haiku lately, in the contests. My guess is he has come very close to winning. The thing is, there is no way for him to host if he doesn't have a blog.

I just wanted to suggest he start a blog, if nothing else just for that. Plus, it's sort of fun to flesh out the poems on one's blog with pictures, music, video or just a spiel.

I hope you don't mind the messaging service? Oh, and... good wishes on the annoying part. I absolutely love that. Well, to certain types. *neener all day long*