Would You Buy a Used Eschatology From This Man? 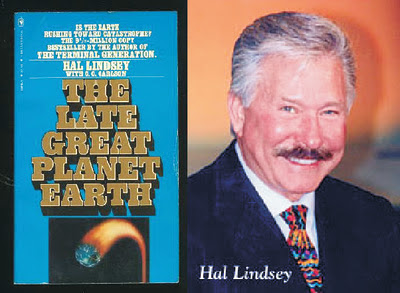 How can ANYONE listen seriously to Hal Lindsey anymore? The other night I turned on George Noory's Coast to Coast AM, and there was ol' Hal, rabbiting on about Bible End-Timey-Wimey prophecies, Gog and Magog, Armageddon, and totally ignoring that he has been reliably wrong for forty-plus years.

His NYT Bestselling book (ALWAYS a good indicator of doctrinal correctness) The Late Great Planet Earth made a number of predictions, not the least of which involved the establishing of the nation of Israel in 1948 being the "budding of the fig tree" referred to by Jesus in Matthew:

"Now learn this parable from the fig tree:  When its branch has already become tender and puts forth leaves, you know that summer is near.  33 So you also, when you see all these things, know that it is near — at the doors!  34 Assuredly, I say to you, this generation will by no means pass away till all these things take place.  35 Heaven and earth will pass away, but my words will by no means pass away." (NKJV)  MATTHEW 24:32


This appears in Mark and Luke as well.  A Biblical generation is generally understood to be 40 years, The idea became popularized that Jesus would therefore return within 40 years of the re-establishing of Israel (or at least Rapture the church), in other words, by 1988. Come Jan 1, 1989, this was proven to be incorrect.

1948-1988......no RAPTURE. This alone is enough to establish Hal Lindsey as a false prophet, but there has been no word of repentance to date from Mr. Lindsey. Rather there have been several books from him updating his ideas.

No repentance for false prophecies, no rapture, no shamefaced shutting his prophetic pie-hole.

Why do we have an entire Christian culture addicted to this prophetic foofery. I came to Christ during the Late Great Planet Earth wave. I read the Bible, and listened to mature Christian teachers, and got over it.

Why can't people figure out that language and grammar don't get all gooey just because you are reading the Bible. "This generation" means "THIS generation", the generation to whom Jesus was speaking. The Gospel according to the New York Times is another gospel.

I have neither the time nor the inclination to examine all of a four-decades-old book. Read the Bible. Hear it.

What's an LGPE wave (Your link does not work, and both Google & Bing are useless)?
Since Hal Lindsay is well respected by the Southern Deadfish & the Assemblies of Fraud - BOTH of which swore up and down "JEEEEEEZUS iyiz a-cummin' bayack!!!" on May 14th, both of whom highly praised Ted Patrick & his redneck "deprogramming" (assault, battery & kidnapping is more accurate) scam, what does that tell you?
Religion, emotionalism and sincerity are no guarantee for truth and never will be.

Late Great Planet Earth. No link...just underlined since it was the abbreviation of the book title.

I've GOT to have this posted on my blog! Can I? Huh? Pleeeeeez!?

It's really sad that Lindsey would "appear" on Noorys' fringey show. But then, that rup... er rapture "doctrine" always was "out there". The rapture: Everybody wants to go to heaven but nobody wants to die.

By the way, it's Harold Camping who's "on" for the 21st. Me, I'm waiting for third impact.

Jay-
Go ahead. I am flattered. And honored.
I am flonored.

But if this keeps up, I'll have to charge scale. (What IS scale for blog entries? Hmmmmmmm...WAIT! It's a negative rate. I WOULD HAVE TO PAY HIM!!!)

Let's just stick with the system as it is, shall we? Post away, O Flayer of Rapture Bunnies! Thanks, too...Camping would not come to the little grey cells.

In my younger and less observant days I used to confuse Hal Lindsay with David ("The Cross And The Switchblade") Wilkerson. I eventually got them sorted out (thank goodness).

And, in the mid-80s, for reasons I can't really explain now, I used to listen to a lot of extreme Fundamentalist screeds on the radio, all of which was thinly disguised as "Christian Broadcasting"(mainly "Point Of View", hosted by the late Marlon Maddoux), and all of which treated God like an ICBM who was going to destroy Our World (or Our Nation which, to them, was pretty much the same thing) any day now, and the only two things which held Him back were (A) constant donations to their "ministries" and (B) diligently making sure the White House and Congress were in Republican hands.

After a few years of this my blood pressure demanded I go back to a strict diet of music. Needless to say, though, I have encountered more than my fair share of people talking about how The End Was/Is Near, and the story hasn't improved any in the years since. I really can't understand the people who give credence to this sort of thing.

Then again, I also have trouble with radical Islamic clerics who extol the virtues of the Muslim paradise as a means to convince people to become suicide bombers, but who never seem willing to strap bombs to themselves.

Michael, I, too, was a "Point of View" devotee. The late great planet earthers from the uS weren't enough, no. Maddoux had to import the LaLonde brothers from Canada.

I can remember one show when Marlon was ranting and railing about the contents of the comic books which children were buying. He used three examples . . . two of which I remember had been long out of print, and the third only being available through specialty shops.

Continuing on with the End Of The World, you might consider peeking at www.raptureforums.com if you interested into further insight in what's in the minds of such people.

Michael, I went to the front page, scrolled down, and could go no farther. Cannot take it any more.

The Rapture is a Johnny-come-lately doctrine from about the mid-1800s.
If you do the Apostles' or Nicene creed on Sundays, you refer to the "Resurrection". That is the historic doctrine of the precursor to final Judgment. (Heaven is spiritual, not ghostly. We will not be Caspers floating about. Jesus' resurrection body was more real than his surroundings. Hence He could go THROUGH the door. It was less substantial than He. The Resurrection equips us with the body which will enable us to enjoy eternity. Hebrews refers to the Temple as a shadow of the heavenly reality.)

Sort of off-topic here, but have you contacted your (so-called) Elected Officials concerning support of the Traditional Cigar Manufacturing and Small Business Jobs Preservation Act?

Yessir I have! And cigars are NEVER off topic!

That being said, it's on for your article on my blog for next week.

Well, get a can of Lysol to fumigate the place, 'cos I'll have a big 'ol maduro alight!

For backstory, I smoke cigars for two main reasons: self-medicating for depression (cheaper and with FAR fewer deleterious side-effects than high-powered prescription anti-depressants. (Also, if a drug states "may cause drowsiness", for me it should read "will induce coma".) Secondly, they keep me awake on long trips, far better than coffee or Pepsi, with FAR fewer calories.

They are also quite pleasant, tho' pipes are moreso.

Glad to meet all the fellow Funny-mental-ism escapees. If Lindsay was on Coast-To-Coast AM, that pretty much means he has "crackpot" written all over him. Look for Camping on an upcoming (side)show.