Hallowe'en was a GREAT night when I was a kid. The Halloween  Carnival was held at the National Guard Armory, with games, a Haunted House, food, prizes. Got my first Fantastic Four comic at one. (It was a cut-out. Not strictly according to Hoyle.) The haunted house had horrors for the squeamish, including a bowl of chilled chicken livers to feel. This must have been before the debut of the Germ Theory of disease.

I Trick-or-Treated a bit as well. Always fun. When I was in play school, we were taken by the local bank, where each of us was given five brand-new pennies in a cellophane wrapper. Bet that doesn't happen much anymore. And of course, lots of candy.

Candy, apples, little toy treats, all from neighborhood types whom we knew. With the Balkanisation of our country, and our neighborhoods, this setup is now a problem (though the Readers Digest articles that hyperventilated about razor blades in apples and LSD laced choccies turned out to be as true as the epidemic of ritual child abuse in the late '80s.)

We now live on streets, not in neighborhoods. We do not know the people we live next to; problematic for letting the kiddies beg for goodies down the street.  But we have developed an answer!

We gather with people we DO know at the Piggly Wiggly parking lot, or behind the Big Church across town, line up the cars, fill the trunks with Wal Mart candies, and on a night Not Hallowe'en, let the kiddies dress up as King David or Esther, never Harry Potter (unless you've been missing the Homeschool Parents Meetings), and browse the car trunks, joyfully caroling "Trunk or Treat!", and partaking of the smorgasbord of glut.

Ray Bradbury wrote stories about cultural castration ("Pillar of Fire"), the State removing Poe and Melville, Dickinson and Lovecraft, creeps, skeletons, ghosts, and zombies from the libraries, anything that might move one to fear or passion, to deliver society to a tapioca calm. This is where we are headed. Trick or Treat!

No surprises. No tricking. No soul.

Now, no-one really expects a screed like this from me, because I lived in Flandersville for years (you know, down the road from Dobsonburg), and we NEVER let our kids do Trick or Treat (though we did countenance the occasional Harvest Festival). First, it was the whole pagan and Satanic thing. Then it was the business of teaching kids that it was OK to beg from house to house. We were the house with the front porch light off on October thirty-oneth. Yeah, we were that family.

I have since repented. 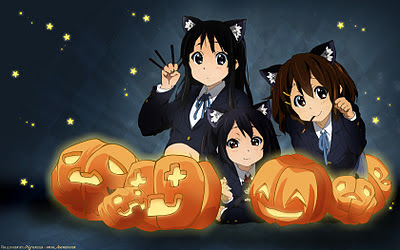 We could celebrate Halloween on October 29th: Have all the kids dress up like bankers and jump out the windows (first floor only, of course).

My father was an avid hunter and used to have a collection of "wounded bird" sound effects 45s that he'd play out in the field to attract game. On Halloween he'd put a WHACKING BIG LOUDSPEAKER under his truck out in the driveway, cover it with a tarp, then wait in the den for kids to come on the lawn. Then he'd play a portion of a wounded crow or goose or something (which, if you weren't prepapred for it, would sound like God Only Knows What Except It Was Terrifying!) and the kids would scatter to the nearest tall timber.

I remember one year when I was a kid (I couldn't have been more than eight or nine) my Mom told us to avoid this one house. She said they were Satanists and drug dealers. I thought she was nuts.

Fortunately my older brother was in charge of taking us out and steered us away from the place without my ever noticing. The next day the cops raided them. There were drugs and they'd killed several animals in a "ritualistic" fashion.

I think this is my morbid way of saying your Piggy-Wiggly idea is a good one.

Actually, I think the Trunk or Treat idea is dreadful, but given our fractured society, it may be the most effective workaround.

I view it as the equivalent of a line of candy buckets that you can extract goodies from at will, with full knowledge of what's in 'em. No surprises, and no "trick" option.

You know, like taking your kid to Wal-Mart on Christmas morning.

While I don't want freaky-deaky whackjobs to have access to the kinder I WOULD like the kiddies to have surprises and a little adventure. Y'know? Otherwise Bradbury's prophetic story will have come to pass.

Perhaps I should have been more clear. I mean that the Piggy-Wiggly thing is a good idea considering the circumstances.

Unfortunately that all too often seems to be the case.

Sorry, I'm in a bit of a morbid state of mind these days.