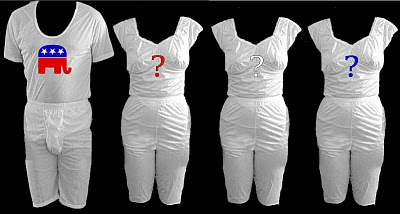 The question of the day is, If a polygynous Mormon were to make it to the White House (and yes, I know it would take an event equivalent to an asteroid strike -read Niven and Pournelle's Lucifer's Hammer - for this to happen) who would be First Lady? Or First Sister-Wife?

Sweet! Glad to see you.

The DD thanks you for your well-wishing, and yes, the senior wife being top of the heap makes sense, unless he would prefer the youngest, most fetching to be most on his arm. I would pay to hear the discussions about that arrangement. Your order is the most likely.

Heinlein creches. Now MY head hurts. It is not outside the realm of possibility, failing a pendulum swing back to the traditional Western mores, which I think will eventually come. I actually worry about that one. Moral whiplash may not be pretty.

I hope the Dread Dormomoo feels better soon. I'd no idea she was feeling poorly. Then again, I've been pretty much comatose myself the past few days... Come on spring!

If the pendulum swings back... That is a scary thought. Not because of an increase in morality, no I'd welcome that, but thinking about the magnitude of the triggering event it'd take to cause the course reversal. Or baring that, the revolution itself.

The DD thanks you, too!
We pray that you will be well pronto!

Pendulums are tricky things, especially when you get hyperdimensional physics involved.