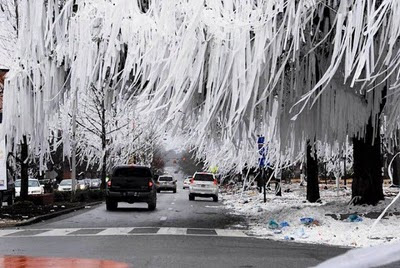 I have long tried to stay out of the Alabama / Auburn rivalry because I don't like messing with other people's religion.

"Al from Dadeville" called in to the Paul Finebaum show on Jan 27, bragging about his act of fannjish terrorism:

"OK, let me tell you what I did the weekend after the Iron Bowl. I went to Auburn, Alabama, because I live 30 miles away and I poisoned the two Toomer's trees. I put Spike80DF in 'em. ... They're not dead yet, but they definitely will die."

The rivalry between the two schools has been bitter, but an egregious act of vandalism like this is unacceptable in any sense. "So what?" you churlishly retort, "It's just a coupla trees."

Yes a couple of 130-year-old oaks that are a community treasure. The trees are regularly mulched with toilet paper. The locals roll the trees mightily after Auburn wins. They are beautiful landmarks, especially when not so festooned.

Harvey Almorn Updyke Jr., 62, of Dadeville, AL, is the miscreant "Al" who poisoned the trees. One defense attorney has already recused himself from the case. This will be interesting.

Mammoth effort is being put forth to rehabilitate the toxic site and save the oaks, Perhaps Toomer's Corner will be blessed with the trees for a long time to come.

"Tide for Toomers" is a Facebook page put up by Crimson Tide fans who deplore this senseless act, and who are raising money toward the effort to save the oaks.
Posted by The Aardvark at 2/18/2011 06:12:00 PM