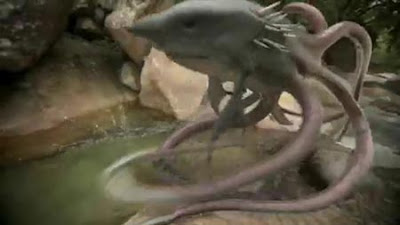 You need to see "Devilfish" as riffed by Mystery Science Theater 3000. It's...bad.

You bring a tear to mine eye. So good to hear trom you. I pray all is well with you and your family.

I am also amazed that you commented on THIS entry....

Frankly, I think you should get a medal for actually sitting through the sort of movies that crop up on Syfy. For me, Life's too short.

Medal, or straitjacket? Naaah, I don't waste much time on SyFy movies. I would as soon go brown-water rafting in the NYC sewers, this being appropriate since SyFy is the conduit through which Canada pumps its tax-subsidized effluent. to us.

I have always had a weakness for Roger Corman's schlock, though. Technology will never keep pace with his strange vision.

Have you ever seen the Fantastic Four movie he produced? "Nuff said.

Yes, I saw Corman's Fantastic Four movie (a good lot of it available on YouTube, which is my second favorite source of video entertainment). I, too, appreciate Corman (the man is an unrecognized genius), but I'll remember him for better things than that (although admittedly I preferred Joseph Culp's Doctor Doom to Julian McMahon's. And I preferred Joseph Sirola, from the 60s animated series, to the both of them).