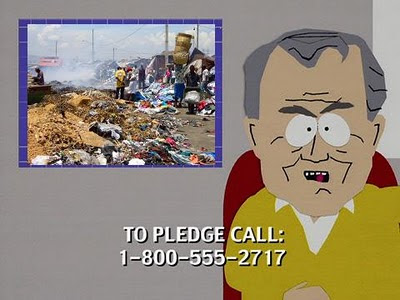 The only problem with FFTP is that they're soft on the Gospel.

As relief goes? They're top-notch.

At this juncture, I'd rather go with good food relief than summat like Operation Blessing, spreading false doctrine like so much heretical peanut-butter.

Thanks for the heads-up.

I actually didn't see anything wrong with what Pat said. Though that might make me evil.

It's a reflection of the superstition so rife in Christendom today. "We'll sell our souls to the devil." Big deal...if you are outside of Christ, Satan's got you anyway. Also, the Scripture makes it plain that God will not punish you for your dad's sins.

Well, Mr. Robertson long since forfeited any credibility as a man of God; he's documented as a false prophet. Why people put so much weight on what he says, I don't know.

What about Canaan? Seems like that's obviously still in effect.

Canaan is a fascinating study of the cup of God's wrath being full. God gave the Canaanites 400+ years to repent (the time Israel was in Egypt). Rather than listening, the Canaanites continued in their gross idolatry, up to the generation alive at the time of Joshua leading the now-freed Israelites over the Jordan. Tat generation's sins were judged, because their time had come. The Canaanites are pretty well gone now. Israel is back "in Canaan-land" geographically, and are doing OK. If Palestinians are at all related to Canaan, well (1) it's because Israel didn't do its job way back when, and (2) they are led by a sorry mongrel lot of terroristic leaders, intent on tit-for-tat revenge for perceived injustices. As we are in a new economy, now, the New Covenant, God doesn't put the kibosh on nations as he used to. He speaks to us in these last days in Jesus Christ, and judges us by His Word. The come-uppance is after the trumpet blows.

OTOH, maybe I am missing some nuance in your pithy comment, Vidad.

Africa, if it is indeed mostly comprised of Ham's descendants, has continued to be in slavery to many other nations for just about all of recorded history. It's either a bizarre coincidence or an endless curse.

I am not convinced that the Canaan curse was an everlasting thing. Textually it seems to have been aimed at Canaan's generation alone. Also, historically it appears that it was merely a convenient proof text to justify the slave trade.