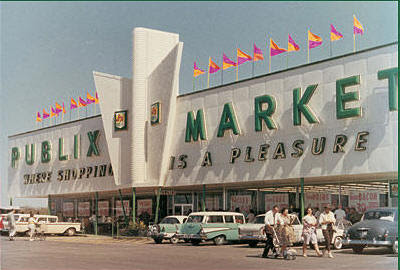 Athens has arriven. They now have a Publix supermarket, and Loen and I went to check it out. It's very clean, very nice, very pricy. We walked the aisles, looking for goodies for our Friday night feed with Gamegod and Grrltechie. Mozz, tomato sauce, like that. We also picked up jelly babies and crumpets, as Loen developed a taste for the goodies in Scotland.

Publix ia a great store. It is also a status store, a place for the upper middle-class to escape the Great Unwashed of Wal-Mart, and is reminiscent of Jack Paar's reportage of the children of movie stars riding through 1950s Beverly Hills in summer with their car windows closed so everyone would think that they had air conditioning. Store brands are pricier than they need to be, and premium brands are breathtaking. The produce and meat sections are amazing, and it is the place to buy sea kittens. It also has the vibe of being the place to shop if you are looking for an affair. Cougars are a-prowl.

Our shopping completed, we checked out, and were asked if we wished to contribute to the Special Olympics or somesuch. I demurred, as I prefer my benevolences be done at places other than the grocer's. Loen asked loudly "Why not?", because he delights in attempting to embarrass his old man. I replied "Because I am a heartless so-and-so.".
The checkout guy, who appeared close to my age, seemed amused. The bag boy Z** took our cart to the Aardvan, and Loen inquired "How do you like working here?", because it has been open less than a month, and because he is keen on working there. Zeb replied "It's a job." with the air of a thirty-five-year-old who has been a bag boy for twelve years. Zeb then asked if we "had been busy", which made me think that he knew us. "Yes" was my reply, "and I hope it remains so!". Zeb asked incredulously "Why would you want it to stay busy?", as though he were really asking "Why would you want to have root canal every day?".

I paused and said, perhaps louder than was meet "Because that's where the money comes from!". As Loen and I drove off, I really started getting angry at the utter foolishness of the question, and the necessity of my having to answer at all. It was laughing anger, but anger nonetheless.

Growing up in South Florida, Publix was the only place to shop--not just because it's a Florida based store, but because there were very few alternatives. We didn't have a Wall-mart until a couple of years ago. Now that we live in Middle Tennessee and have readily available Wally-worlds (almost on every corner) that's where we shop. They recently opened a new Publix here in town but we just can't afford to shop there. But I love going home and having no excuse but to go into the glittering, well stocked world of middle-class shopping.

Actually, if we had money, I would probably shop there exclusively.

If we had money.

Yeah, Wally-world gets most of our grocery bucks, with our local Piggly Wiggly getting the "I don't want to go to town for that " part of our custom.

We do Aldi once a month for staple items.

And yes, Rachel. It DOES glitter. Such glittering there is.

David, face it. You're an elitist. Chairman Mao knew how to deal with the likes of you!

Yes, I am an elitist. Rachel is worse, though.

She regularly goes into Walmart dressed as a dirty peasant. And if anyone picks on her she feigns shock and says "Don't you recognize your queen, little one?"

That reminds me of a College Incident.
We had a special guest to appear at St. Andrews: a very, very old lady and her entourage came to put on a presentation to convince us that she was the True Princess Anastasia. She was tiny and ancient, and would have passed as bag lady with no trouble. Her fat blowhard husband was a lawyer, and they had a hollow-eyed member of a Royal Family to add an accent to the proceedings.

I will dig up a photo and post it.

I shall be sure to bow when next I see Rachel, but only a bow...my curtsy needs work.

It's no wonder your curtsy needs work. I still can't figure out how you even manage to WALK in those tight miniskirts you call "dress clothes."

It's the wretched stiletto heels, man.

How does ANYONE walk in those?

(That reminds me of a scene from the George Reeves "Superman" TV series. Lois Lane and others were sent back in time to the caveman era.

A cave-woman immediately commandeers Loise's high heels, and tries to walk in them. I reckon even Neanderthals recognised the importance of shapely calves.)

Think twice about going to Publix. Their produce is THE BEST I've found anywhere, and usually the prices rival Wal-Mart for the quality you get. (What's that? An onion that's not already rotting in the middle? May it never be!) I know how you are about your avocados, mister!

Plus their B1G1F sales are fantastic, made all the better if you have coupons.

Okay, maybe this makes me a grocery snob, but comparison shopping for the sales online has become a game, and it's so fun to win. ^_^

Ohhhhh, definitely a must for specialty items like avocados, Brit foods. and primo meats for Occasions. I'll check their bogofs, for sure.

I've never had a problem with the produce at Wal-mart. It is a lost cause at our local Piggly Wiggly, though. Vidad's compost heap would reject the stuff from the Pig. Violently.