What is WRONG with me?

When I was a tot, we had a collie, yclept "Toby", for "Tobias Smollett" (Momma was an English teacher). He was tolerant, though he did nip me once when I insisted on using him as a horse. When Momma died, and went to Live Elsewhere, Toby came with me, but I paid little attention to him (I was harangued about Being Clean, and some of it took. Smelly, slobbery dog. They opted to finally give Toby to someone with a farm, and Room to Run, and all, and blamed me because I did not pay attention to him. Never had a dog again. Lots of cats in the yard (we lived on an old plantation...which had Room to Run) so I was environmentally disposed to become a Cat Person. We currently have several yard cats, and little rodent trouble.

Some months ago, we were visited by a horse, by which I mean a black Great Dane adolescent. The Dread Dormomoo, who has had unpleasant run-ins with local dogs, was worried that the brute was after the cats, likely for a snack, so I went out as was my Manly Duty to confront the fell beast. He was, in fact, jumping at the cats, and making a snort and doing that forepaw crouch thing, and I sussed out that this was not due to hunger pangs.

Monstro wanted to play with the cats.

They studiously ignored his antics. I was utterly charmed. I did the closest approximation to his snort and puppyish crouch, but I presented too high a profile, and so he was nervous, and would not come to me. He would mirror my attempt, then dash off, stop, and do it again.

I was playing with a dog. A monstrous dog. When after weeks of his sometime visits I sat on the front steps, he came up to me and I was able...to pet the dog. He is large, and has a scent to him, and mercy, he is a drooly-Bob, but he tolerates me, and we play a bit.

I'm playing with a dog.

No, I want to roll on the grass and tussle with a dog.

What is wrong with me?
I blame Charlie. When we moved into our present business location in '05, a little dog showed up. His appearance and behavior reminded my daughter and me of the Chuck Jones dog that bedevils Porky Pig, so we named him "Charlie". 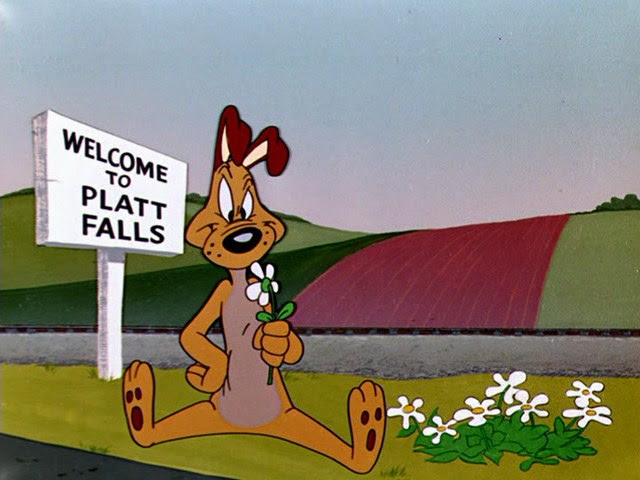 We gave him food, and all was well. He had no ID. We got him a little collar, and I reckon that clued his owners into a need to take better heed to him, because he no longer wandered the downtown area. Sadness.

We have several dogs that wander around our tiny townlet, and I know the dangers of Petting the Puppy, or worse, feeding it. We have a wandering bloodhound who we dubbed "Lady Bird", after Hank's dog on King of the Hill. There is a small we-think-part-bassett who reminds me of an early Hanna-Barbera dog named "Snuffles" who I will pet, and who has a bad habit of wandering in the shop. He is short, squat, and ancient. And adorable.

I said that. What is wrong with me? I actually consider finding homes for our katzenkinder, and getting a smallish dog, maybe a corgi, or a not smallish one like a Great Pyrenees.

Who am I, and what have I done with me?

I don't know what you've done with yourself, but anyone who uses "yclept" in his writing commands considerable respect from me (if that's any help).

Humanity, is what's wrong with you. A dog is a gift from God, and they will love you when no one else will.