"This machine is powered by the soul of a forsaken child?" 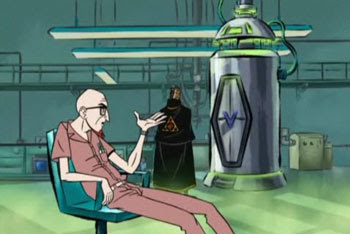 So, didja hear that Pepsi puts extract of aborted human fetuses in its diet drinks?

No, really...this is making the rounds. And it is true, in a first-cousin-once-removed kind of way. Which is to say not.

The actual story is more involved, yet discomfiting as well.

LARGO, Florida, May 26, 2011 (LifeSiteNews.com) – Scores of prolife groups are calling for a public boycott of food giant, PepsiCo, due to its partnership with Senomyx, a biotech company that uses aborted fetal cells in the research and development of artificial flavor enhancers.

Pro-life watchdog group, Children of God for Life (CGL), is now joined by major pro-life organizations calling upon the public to target PepsiCo in a boycott.

Pepsi is funding the research and development, and paying royalties to Senomyx, which uses HEK-293 (human embryonic kidney cells) to produce flavor enhancers for Pepsi beverages.

“What they do not tell the public is that they are using HEK 293 – human embryonic kidney cells taken from an electively aborted baby to produce those receptors,” stated Debi Vinnedge, President for CGL, the watch dog group that has been monitoring the use of aborted fetal material in medical products and cosmetics for years.

The revelation about Senomyx’s research techniques motivated Campbell Soup to sever all relations with Senomyx.

So, Senomyx is making sensors with chemical receptors derived from the HEK 293 line of embryonic cells to determine whether-or-not a flavorant or sweetener will cause the proper taste receptors to fire, making the end product yummy.

This reminds me of Dr. Venture's Dream Machine, built with part of an orphan child. His justification? "Well, I don’t know, I mean I didn’t use the whole thing!"

Personally I have a measure of difficulty with Pepsico products, now; and Kraft; and Nestle. Bah. All companies I like that have taken advantage of this soul-less technology. Operation Paperclip, anyone?

Sounds like an urban legend straight out of the Natty-Enq...
Don't believe everything you read.

I heard a guy burbling about "Pepsi uses human embryos!" on Coast to Coast AM (yes, I know), so I immediately started doing research.

There is apparently one news release repeated across dozens of sites, but the basic report appears sound.

There may be little difference to the embryo, however.

"I heard a guy burbling about 'Pepsi uses human embryos!' on Coast to Coast AM (yes, I know)"

Well, you can't really be blamed. This is what happens when Clear Channel Communications owns as many radio stations as they do. Programming gets horribly homogenized and monotonous. I've been in South Carolina for a decade now, and all I can say is Thank God for Pandora and related Internet content! Commercial radio has become so overwhelmingly bland it's small wonder any weevil with a transmitter can scare up a ratings point or two.

What Michael W. sed:
Anymore it makes little difference if you're talking about ABCNNBCBS, or FauxNews & the Clear Channel corporatists, the name of the game is advance the agenda &/ stir up the plebes, therefore you don't get steak as much as baloney sandwiches...maybe braunsweiger if you're lucky.

If you can find good braunsweiger in Charleston you're a better man than I am, Gunga Weatherly!

And I thought Soylent Green to be a little farfetched.