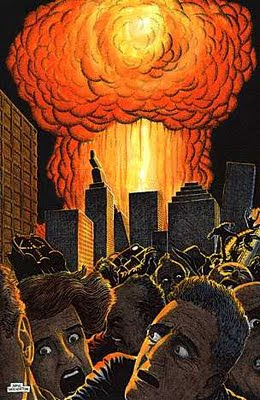 I am comforted that we have been brought from the brink of catastrophe by the courageous action of Mssrs. Boehner, Reid and Soetero. The governmant did NOT, in fact, shut down. WHEW! I was losin' sleep over THAT one. Knowing that the watchful eye of the Givement continues to glare balefully down on me gives me hope for Another Day! O, Hallelujah!

I am weary of the snarky little comments by non-nuclear people about how dreadful atomics are, how dangerous, how deadly. Then they point a quivering digit at the quake-stricken Fukushima Dai-ichi plant. Next they will be invoking Godzilla.

In their zeal to do a hatchet-job on The Offending Atom, they overlook the small fact that nuclear power isn't dangerous.

Earthquakes are. The earthquake is wot done it, an Act of Gaia. Our precious Earth-Mother shook, rattled and rolled the Japanese atomic plant to death. Without the earthquake, Mr. Atom would still be our friend!

The radiation released was reported breathlessly by the Green newsies, who clearly did not have classes on Atomic Readiness on the 4H TV Action Club in elementary school! They would know that the vast majority of the radiation released consisted of short-lived alpha-emitters, the type of radiation easily shielded against by the sheet of paper I am not typing on now.

Here is a neat little piece on radiation. (You will need to provide an email to continue the lesson for 10 minutes.)

Radiation has dangers, yes, but there are different types of radiation, and the differences in them are dramatic. Learn about them, and have less fear when CBS or NPR begin to bleat that attack by giant radiation-monsters is imminent.
Posted by The Aardvark at 4/11/2011 09:29:00 AM